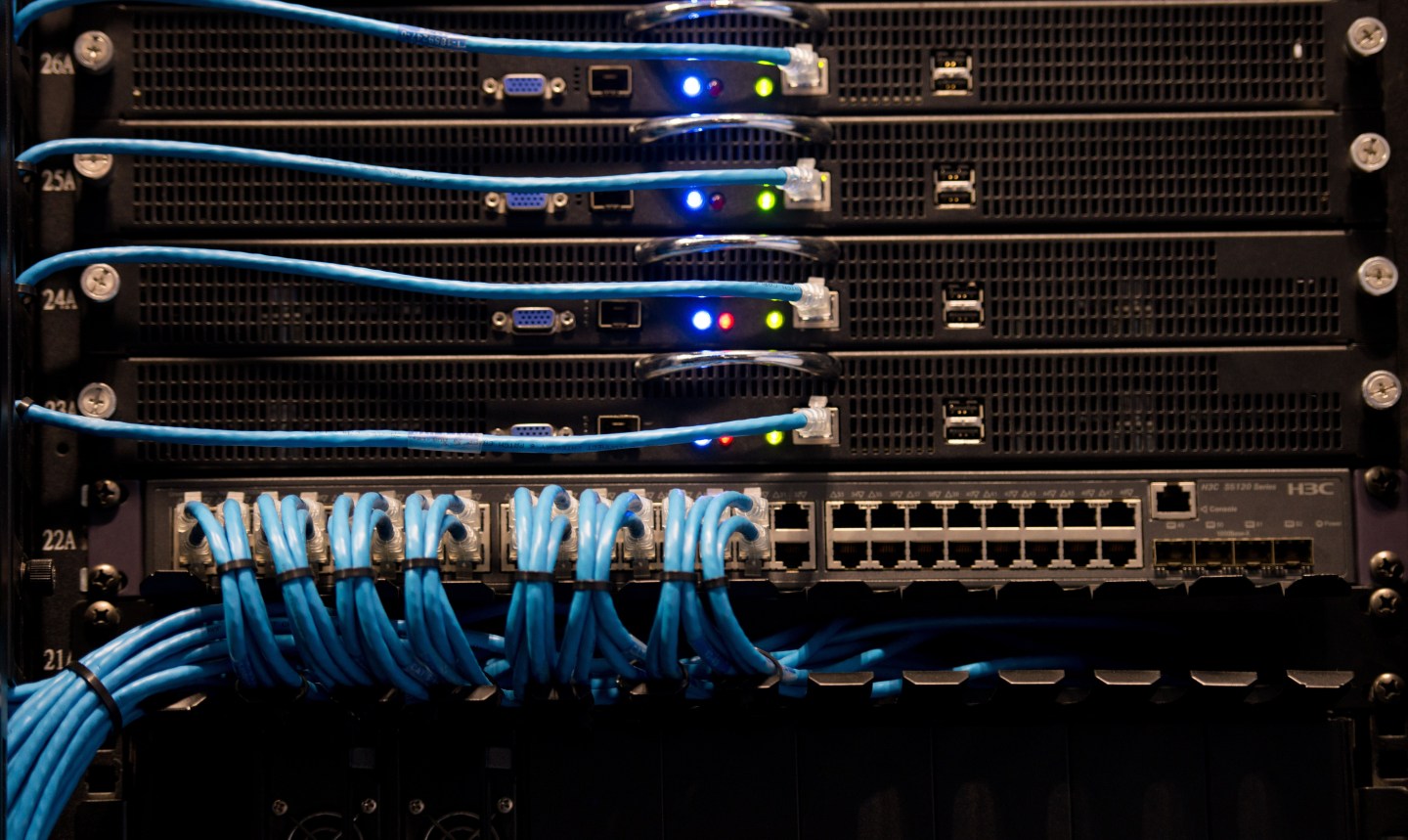 This photo taken on November 19, 2014, shows an internet server with its cables on display at the World Internet Conference in the ancient town of Wuzhen, in east China's Zhejiang province, where the conference takes place. A top Beijing official called for stronger management of the Internet at a government-organised conference condemned by rights campaigners as a Chinese attempt to promote its online controls globally. AFP PHOTO / JOHANNES EISELE (Photo credit should read JOHANNES EISELE/AFP/Getty Images)
JOHANNES EISELE AFP/Getty Images

Starting Wednesday, a handful of China’s most senior political leaders and business executives will come together with top Western technology firms in the water town of Wuzhen for the second edition of the World Internet Conference. On the agenda will be cybersecurity, China’s technological future, and global Internet governance.

President Xi Jinping will give the event’s keynote address, a sign of the elevated status of this year’s gathering considering that his only presence last year came in the form of a letter of congratulation.

The theme of the event – “shared governance in cyberspace” – is misleading, as these names often are. Instead, Beijing sees the summit as a platform to send one clear message to the world: that the Chinese Communist Party has ultimate control over the Internet and the information technology (IT) business environment in China.

Last year’s event was little short of a fiasco. Around midnight on the final night, the Chinese slipped a draft declaration under participants’ hotel doors asking them to sign onto a “Wuzhen Declaration” pledging support for China’s vision of “Internet sovereignty,” where the government will maximize state control over all networks, data, and information. Realizing failure of the blunt approach, the declaration was never released, and according to a statement by China’s Internet czar, Lu Wei, there will be no declaration this year.

So, what is in the cards for this year?

The commercial environment for foreign IT firms in China has grown increasingly hostile over the past year. At least seven separate laws and regulations are now increasing pressure on foreign firms to turn over source code, provide encryption access, and localize data and equipment. Foreign IT firms will likely have to undergo as many as four separate security reviews at different levels in the bureaucracy over the next 1 to 2 years if they choose to enter or remain in the Chinese market. Beijing is unmistakably linking localization with security.

Only one of these regulations has actually been passed into law (the national security law) – the remainder are still pending review. But informal implementation of new data and equipment reviews has already started. The event will hence be a key indicator to gauge the government’s thinking on these pending requirements. Comments by Xi, Lu, and others will be important signals of whether the government intends to revise the most alarming provisions of drafts including the country’s counterterrorism law, banking and insurance IT rules, and cybersecurity law.

A need for foreign technology

In spite of these measures, the Chinese government is recognizing that it may have alienated a Western tech industry whose support it badly needs.The Chinese government knows that it needs foreign technology, expertise, capital, and jobs as the growth slows and the economy shifts to a more sustainable growth model. The leadership wants high-tech sectors – particularly IT – to serve as a new engine of growth, and knows it will not be able to achieve this goal without foreign help since China’s domestic tech industry lags so far behind.

And so, there will be a lot of talk about the important role of the Internet in China’s economic development.The leadership unveiled the “Internet Plus” strategy last spring with the goal of using advanced Internet technologies to upgrade traditional Chinese industries. Unlike a lot of Chinese government policy rhetoric, this one is real and there will be a significant increase in state funding for fields such as the industrial Internet, big data, ecommerce, mobile health, and smart logistics.

To support this and its other technological strategies, the government will hence seek greater foreign partnerships and investment, though strictly on its own terms. Indeed, the picture will not be entirely bleak for foreign firms in China. The need for foreign technology is made clear in the Chinese definition of “indigenous innovation.” Chinese policy explicitly defines this term as assimilating and acquiring foreign technology, improving upon it, and eventually making it Chinese. As a consequence, we will see a lot of discussion about expanding international cooperation. Let us not forget that the event follows on President Xi’s visit to Seattle in September, where his administration aggressively courted the US tech industry to kick-off his first state-level visit to the U.S.

Foreign firms that position themselves as helping advance the “Internet Plus” strategy will be in a better position in the China market. That is because officials and company executives face pressure now to demonstrate their own commitment to this plan.

Tackling tensions between security and innovation

Contrary to popular perception, Chinese industry and the Chinese government are not always aligned. This conference is organized by the Cyberspace Administration of China (CAC) – the administrative office of the Leading Small Group for Network Security and Information. This leading small group has emerged as one of the most powerful bodies in the Chinese bureaucracy today and is driving a conservative policy agenda pushing for stricter state control over all networks, data, and information.

But this hardline approach to IT and cyberspace security is at odds with the leadership’s broader goals to promote homegrown innovation and entrepreneurship. This is a sign of internal tensions. In fact, there is growing pushback from different types of Chinese companies. New security regulations will bring added compliance costs to Chinese start ups and small companies. Chinese companies are trying evade government pressure to buy from local technology suppliers deemed more “secure,” a recognition that local suppliers lag behind when it comes to securing network infrastructure.

This means that foreign technology firms may have a longer window than often estimated to maintain their competitive edge in the China market. Chinese technology innovation may not progress as quickly as the leadership would like so long as the state has a heavy role in capital allocation and moves ahead with security regulations that hold back Chinese entrepreneurship. Local Chinese companies could also be powerful advocates for limiting the extent to which the new security rules are enforced.

The government will use the conference to gain international recognition and support for China as a major player in Internet governance.Beijing has long griped about the threat posed by western – especially US control of cyberspace. The event will serve as a platform for the government to gain international recognition and to assert the legitimacy of its claims to state sovereignty in cyberspace – a challenge to the open flow of information across national borders promoted by the US.

The event comes at an important time as the US is in the process of relinquishing its lead role in Internet governance through a cryptic but all-important political procedure aimed at creating greater international support for existing Internet governance rules. Beijing is keen to have a more prominent role, but delays in this transition would not be unprecedented and would not go over well given the government’s growing assertiveness on this topic.

Samm Sacks is a senior China Analyst at Eurasia Group.