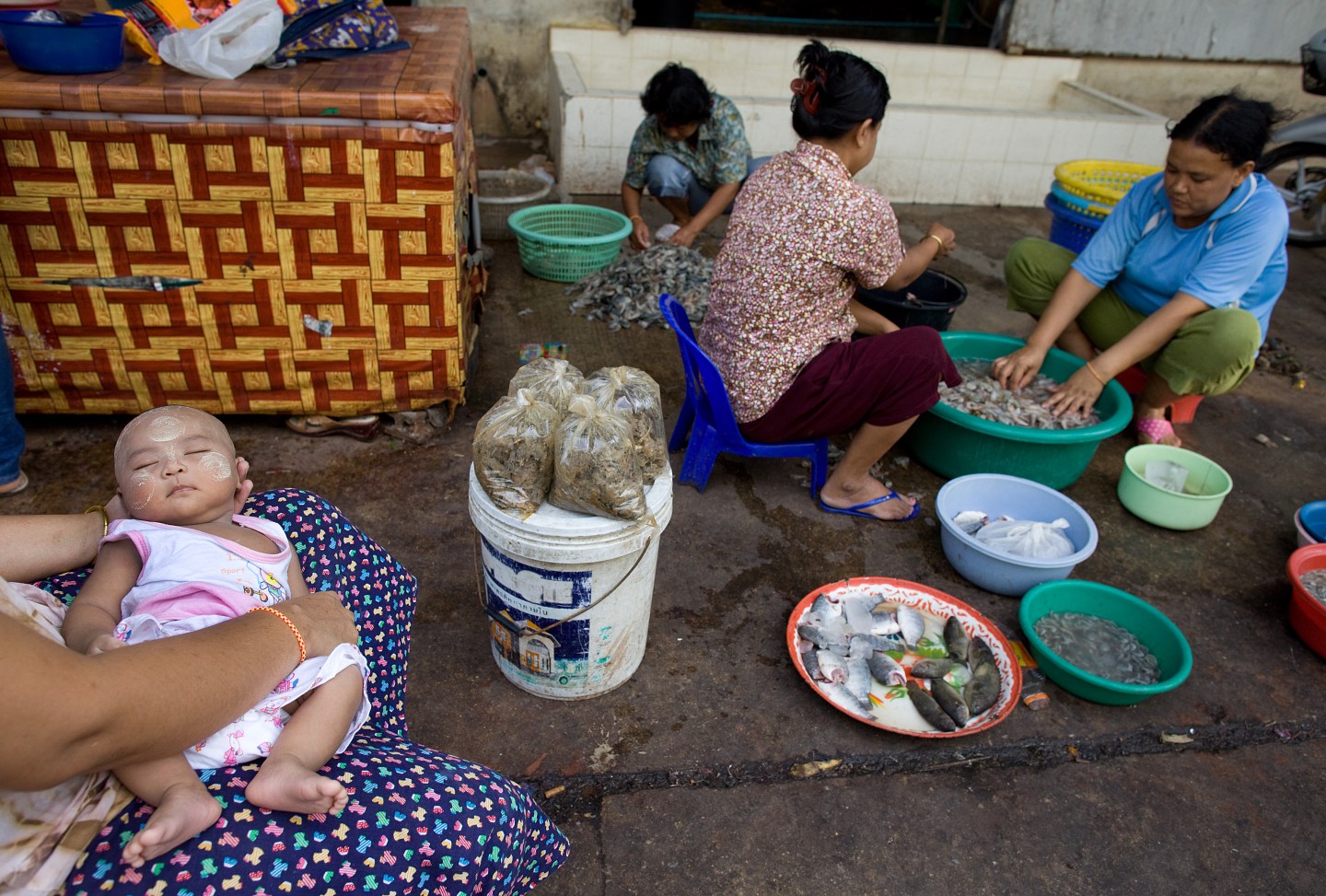 MAHACHAI, THAILAND - FEBRUARY 25: Burmese migrants workers peel shrimp outside a shrimp factory as a baby sleeps February 25, 2010 in Mahachai, Thailand. Migrant workers, mostly Burmese, are running into more difficult times as many face deportation as an approaching deadline set by the Thai government nears that forces foreign workers to go through a nationality verification process. Among the 3 million migrants, many are poorly paid, and face extortion, arbitrary detention, forced labour and physical abuse, with many of the undocumented workers coming from Myanmar. Today Thai soldiers shot dead three migrant children from Burma who were traveling in a pick-up truck when their driver failed to stop at a checkpoint. They say a three-year-old girl and two boys, aged six and 16, were killed instantly and four other Burmese nationals said to be migrant workers, were wounded in the shooting.The incident occurred in Ranong province around 550K. south of Bangkok. The Thai government has been criticized by several Human Rights organizations for increasing contempt for refugees and ast December Thailand expelled more than 4,000 Hmong back to Laos. (Photo by Paula Bronstein /Getty Images)
Photograph by Paula Bronstein — Getty Images

Shrimp linked to systemic human trafficking is at the heart of Thailand’s $7 billion seafood export industry, and is reportedly landing on the shelves of some of the most well-known brands and retailers in the U.S.

An investigation by the Associated Press has found that enslaved Burmese migrant workers, including children, regularly work in shrimp sheds in the port town of Samut Sakhon, the country’s main shrimp processing region. Parents and kids were found inside dirty warehouses that smelled of sewage, and often worked 16-hour shifts with little pay and were monitored in case they escaped.

The AP traced shrimp from the sheds–which belong to the Gig Peeling Factory–to major Thai exporting companies, such as Thai Union. U.S. customs records examined by the AP showed the shrimp made its way into the supply chains of major U.S. food stores and retailers such as Walmart (WMT), Whole Foods (WFM), Petco, Kroger (KR), Red Lobster, and Olive Garden (DRI).

The slave-peeled shrimp also entered the supply chains for well-known seafood brands such as Chicken of the Sea and Fancy Feast. In total, AP reporters found that around 40 U.S. brands and more than 150 stores carry shrimp with suspect origins. AP reporters also went to supermarkets in all 50 states and found shrimp products tainted with forced labor.

Shrimp is one of the most consumed seafood in the U.S., with the AP stating that 1.3 billion pounds are eaten every year, or about four pounds per American. Thailand sends nearly half of its supply to the U.S., and despite vows from the authorities to clean up the seafood industry, abuses are rampant. An International Labor Organization report estimated 10,000 migrant children aged 13 to 15 work in the city, and the U.S. Department of Labor has several ongoing projects aimed at weeding out child labor in the Thai shrimp industry.

Thai Union Group, which owns the brand Chicken of the Sea, announced last Thursday that it would stop using all external pre-processors of shrimp and bring the peeling and cleaning work in-house by Dec. 31. “The abuse of human rights must not be tolerated,” said Thiraphong Chansiri, president and CEO of Thai Union, in the statement.

Whole Foods told Fortune that it has investigated its own supply chain and expressed confidence in Thai Union Group’s own checks. “We are confident that Thai Union shrimp supplied to Whole Foods Market did not come from an illicit processing facility, nor do we purchase any shrimp from peeling shed facilities.”

A Red Lobster spokesperson also sided with Thai Union. “We have investigated the claims in the Associated Press story, and we are confident based on our findings and assurances from Thai Union that our seafood supply was not associated with the abusive pre-processing facilities,” said a statement issued to Fortune. Darden, which owns Olive Garden, said they were not using slave-peeled shrimp. “Our supply chain team has confirmed that we did not receive any product from the pre-processing sources identified in the Associated Press story,” a spokesperson told Fortune.

A Walmart spokesperson told Fortune they were looking into the issue. “We are aware of the Associated Press story, and we were horrified by the conditions and treatment of workers the reporters uncovered.”

We have reached out to Kroger for a comment to the AP investigation, and we will update the story with their response.