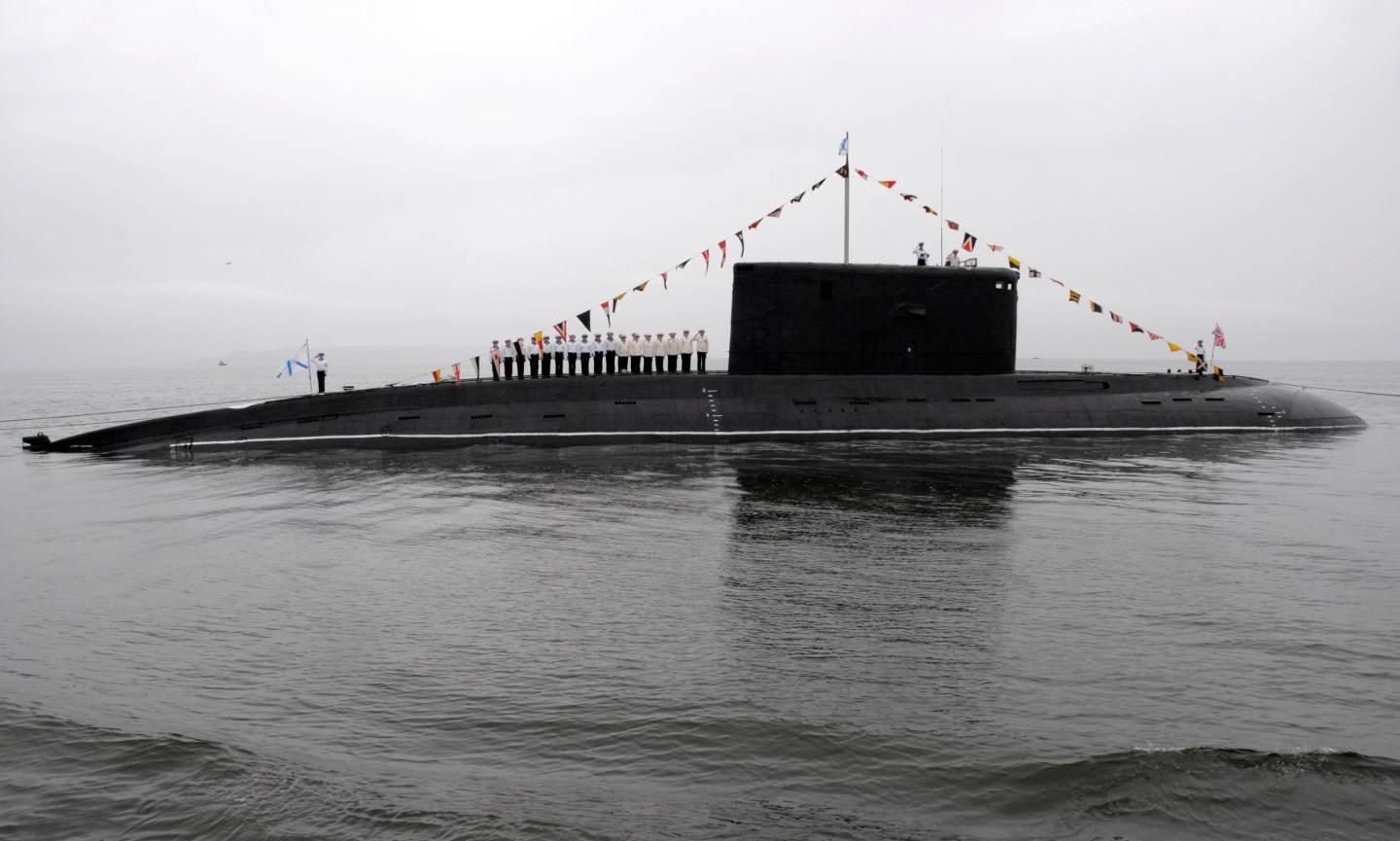 The crew of a Russian Kilo-class diesel submarine line up on its deck during a naval parade rehearsal at the harbour of Russia's far eastern city of Vladivostok, July 23, 2010. Russia will mark its Navy Day on Sunday. REUTERS/Yuri Maltsev (RUSSIA - Tags: MILITARY ANNIVERSARY) - RTR2GNLR
© Yuri Maltsev / Reuters REUTERS

A freshly-minted Russian submarine fired at least one cruise missile into Syria from the Mediterranean Sea Tuesday, marking the first time the Russian military has used a sub-based cruise missile in combat.

Russian media reports that the Rostov-on-Don submarine fired the Kalibr cruise missile as part of a wave of airstrikes launched against multiple targets in Syria over the last three days. Those reports quoted Russian Defense Minister Sergei Shoigu, who confirmed the strikes were the first cruise missile strikes Russia has launched from a submarine as its military continues to test new capabilities in the ongoing Syrian conflict.

The strikes targeted the Syrian city of Raqqa, destroying munitions factories and depots as well as oil infrastructure being used by the Islamic State, according to Shoigu. Raqqa is the de facto capital of the Islamic State.

Prior to launching salvo of cruise missiles from a fleet of surface vessels in the Caspian Sea in October, Russia had never previously used its 3M-14 ship- and submarine-based Kalibr cruise missiles in a live military operation. In those strikes and in strikes since, the Russian Navy has launched the missiles from surface ships, targeting sites up to 1,000 miles away. The Russian air force has also armed its Tu-95MS heavy bombers with its latest Raduga Kh-101 air-launched cruise missile, which made its combat debut in Syria over the past two months as well.

By launching its first combat strikes from a submarine, Russia is gaining key real-world experience with previously-untested systems. It’s also demonstrating to itself and to the West that it now has a long-range cruise missile capability formerly monopolized by the U.S. and its allies.

The strikes also serve as an important real-world workout for the newly-operational Rostov-on-Don, which was commissioned earlier this year and only finished up its final at-sea testing in October. It is the second of six so-called Project 636 Vashavyanka-class submarines being built for Russia’s Black Sea Fleet. NATO refers to the Project 636 subs as “Kilo-class,” though the new Project 636 is an improved version of the older Project 877 Paltus class subs that also carry the Kilo-class designation.

Aside from demonstrating that Russia has overcome the myriad technological challenges inherent in launching cruise missiles from a sub, the successful combat launch of long range Kalibr cruise missiles from a Kilo-class submarine carries political ramifications as well. Cruise missiles like the Kalibr are designed to fly circuitous, low-altitude routes to their targets to avoid radar and other enemy air defenses along the way. Russia has exported Kilo class submarines to several other countries, including China, India, and Iran.

In an exchange between Shoigu and Russian President Vladimir Putin broadcast on Russian television Tuesday, Putin noted that the Kalibr cruise missile can be fitted with both conventional and nuclear warheads, adding that the latter would “never be needed in the fight against terrorism.”

For more on the threats emerging Syria and Russia, and beyond, watch this Fortune video: