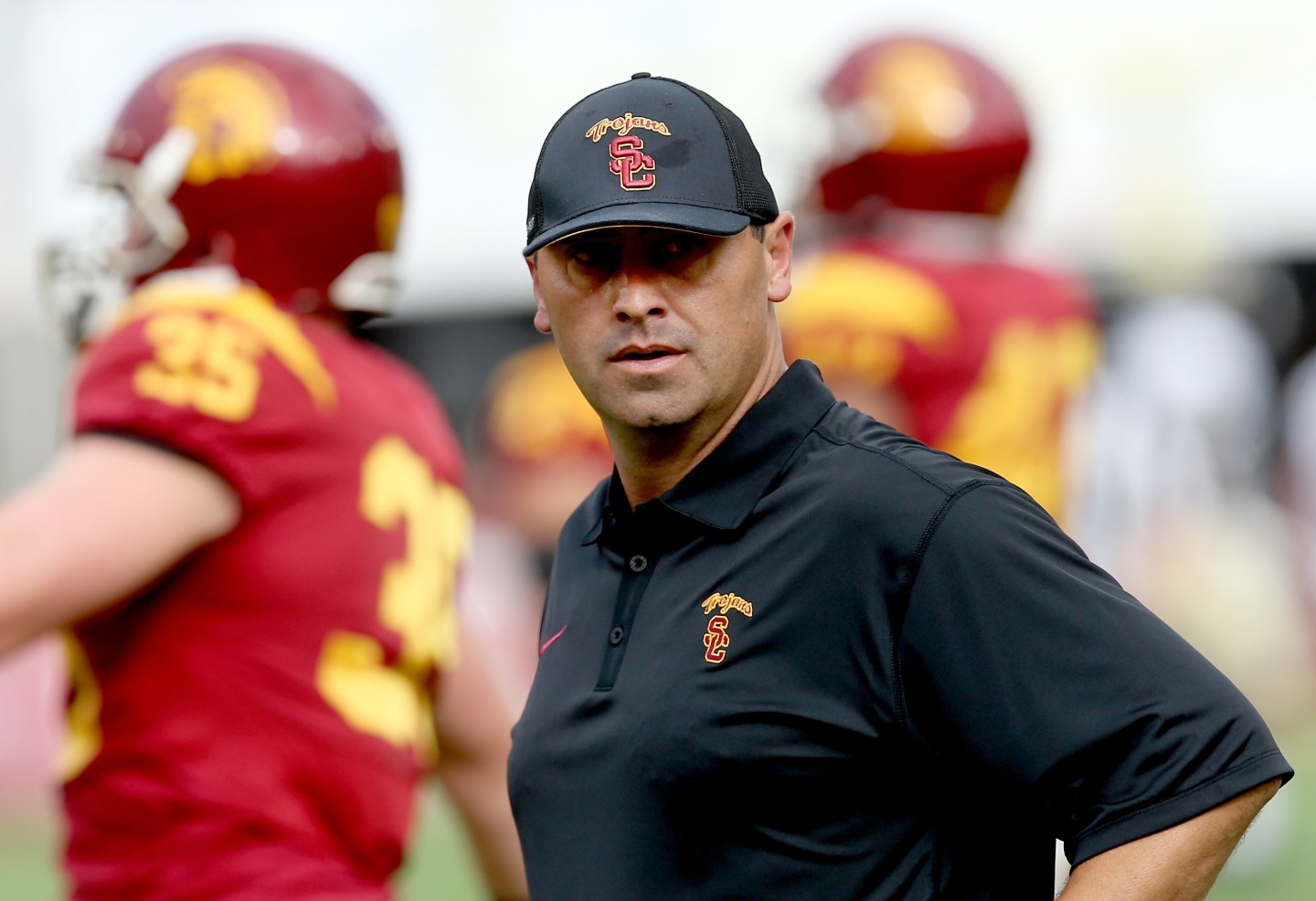 At the University of Southern California, football is a way of life. So it caused a major stir when the school fired its head coach, Steve Sarkisian, in October after he reportedly showed up intoxicated to an alumni event and to a team practice. In his place, offensive coordinator Clay Helton took over as interim head coach, and then as permanent coach after the team went 5-3 under his watch. The drama somewhat settled down—until now.

On Monday, Sarkisian filed a complaint against USC for damages. The lawsuit could be especially bad for USC athletic director Pat Haden.

Celebrity news site TMZ, which broke the story, reports that Sarkisian is seeking $30 million, though the legal complaint does not contain that figure. His complaint (you can view it here) accuses USC of 14 different grounds for damages. Chief among them are wrongful termination, breach of contract, and discrimination on the basis of a disability. In the complaint, Sarkisian demands the $12.6 million in salary that was remaining on his contract.

After a “Salute to Troy” annual fundraising event in August where he was slurring his speech, Sarkisian publicly apologized for “my behavior and my inappropriate language.” His legal filing confirms that he “came to grips with the fact that he suffered from alcoholism, a disability recognized by medical experts as well as by California law.” You might assume that when a coach shows up to work drunk (whether it’s an alumni event, a practice, or, according to some reports, an actual game), the coach ought to lose his job. But it may not be so cut-and-dried.

If Sarkisian’s claim is to be believed, he informed athletic director Haden of his alcoholism and Haden responded in a callous manner. From the complaint:

On October 11, 2015, Mr. Sarkisian pleaded with his boss Pat Haden, the athletic director, to give him time off to get the help he needed. Rather than express any concern or willingness to accommodate this request from a man whose history with USC goes back 23 years to his days as a student athlete, Haden’s immediate response was to derisively repeat the phrase “Unbelievable.” Shortly thereafter, Haden called back and placed Mr. Sarkisian on indefinite leave. Less than 24 hours later, while Mr. Sarkisian was on a plane traveling to get the help he needed, Haden notified Mr. Sarkisian by email that he had been fired.

Sarkisian’s claim repeats the mantra that USC “kicked him to the curb” three times, and devotes an entire section, called “Steve Athletic Career,” to Sarkisian’s personal history in sports, dating back to his days as a high school athlete.

Does the suit have a chance? “It’s really hard to tell, but he certainly has a case that will survive a motion to dismiss,” says Kelly Gallagher, a labor and employment law attorney with the firm McCarter & English in Hartford, Conn. Sarkisian’s complaint is particularly dependent on facts—like when certain events occurred and where—and as a result, Gallagher says, “It’s not something that could be handled in a court quickly. There are lots and lots of messy facts. This is a case very ripe for discovery and depositions. If I were USC I’d be looking for a pretty strong protective order that any documents produced in this litigation can only be used for this litigation and can’t be used publicly.”

In a trial situation, details could potentially emerge that would embarrass the university, like additional events where Sarkisian was intoxicated, or new information on how much the school knew about his condition and when. As a result, USC might be motivated to settle it privately and quietly.

But that doesn’t appear to be what Sarkisian wants. “Based on how the complaint is written, I think he wants this to play out in the court of public opinion for a while,” Gallagher says. She likens the first few pages of the complaint to “an exciting little nutshell” for the media and the public, aimed more at stoking sympathy (or at least controversy) than at convincing a court.

The complaint paints USC, and athletic director Haden, in a harsh light. “Instead of accommodating Sarkisian’s disability, USC kicked him to the curb,” it reads. In addition to the dramatic language, Sarkisian’s speed in filing the lawsuit suggests that he is aiming to cause a public stir as much as get a large settlement and avoid court.

California requires that people filing discrimination suits first file their claim with the Equal Opportunity Commission (EOC). Sarkisian did that, but then immediately requested a release of jurisdiction, which is “very aggressive,” Gallagher says. Most plaintiffs need, and take, much more time to marshal facts. Only six weeks passed from when USC terminated Sarkisian until he filed. Six weeks is a remarkably fast turnaround—Gallagher says the more common time is around six months after termination. “The quickness,” she says, “makes it look like he has an axe to grind.”

To be sure, for the moment we only have one side’s story. USC has not publicly commented on the lawsuit beyond a statement in which it said that it, “has not received anything related to a lawsuit regarding Steve Sarkisian” and that, “should such a lawsuit be filed, USC does not comment on pending litigation.” Until USC responds or makes its own filing, Sarkisian may be winning the P.R. battle—especially because this is only the latest in years of turmoil at the school’s football program.

Drama at USC football, “has become run of the mill for the last five years, basically since Pete Carroll left,” says Ryan Abraham, the publisher of USC news site USCfootball.com. “There have been so many crazy stories. It’s almost a daily thing, and you just get tired of it.” After Carroll left to coach the NFL’s Seattle Seahawks in 2010, the hiring of Lane Kiffin as head coach was controversial. Sarkisian’s appointment as head coach in 2014 was again controversial. “People felt like, if you fired Kiffin, why are you hiring Sark, who’s the same guy but with a better personality? And a drinking problem,” Abraham recalls.

Abraham, a plugged-in USC insider, believes any remaining support for Sarkisian will go away now that he is suing the school, but that support for Haden will dissolve along with it. “Different alumni are mad about different things,” he says. Some, for example, are still angry that Haden did not sufficiently fight the NCAA over its sanctions against the school in 2010 for violations related to running back Reggie Bush. “This has to be the last straw, really. I can’t picture Haden sticking around much longer. They’re not going to fire him, they’ll let him ride off into the sunset. But if he doesn’t retire within the next four weeks, I’ll be shocked.”

After USC fired Sarkisian, many in the press called for the school to also fire Haden, who sat on the board of trustees until 2010 and was a member of the inaugural College Football Playoff selection committee (he stepped down in October). There were questions over how much Haden knew about Sarkisian’s condition and whether he did enough to help (or in some way handle) it. “It’s time for Pat Haden to go,” wrote USA Today. A San Francisco Chronicle headline read, “Maybe USC’s next fire should be Pat Haden.” Sarkisian’s legal complaint, in which Haden figures prominently, will add to the scrutiny.

Whether or not Sarkisian’s lawsuit proves to be a black eye for the school, some alumni still say all that matters is on-field results. If you ask alumnus Aaron Baygell, a former athletics chairman of the USC Alumni Club of New York, fans will ignore negative press and scandals—and maybe even a drunk coach at a team event—if the team is winning games.

“Coaches don’t go to USC to lose football games,” says Baygell. “The alumni expect results. I don’t want to say that alcohol is entrenched within the school’s football culture, but, when you hear stories [about Sarkisian’s alcoholism], you just think, ‘Okay, can you do that and also be a good football coach?’ If you’re winning, people may overlook all the other stuff.”

“Much of what is stated in the lawsuit filed today by Steve Sarkisian is patently untrue. While the university does not as a matter of practice comment on personnel matters or litigation, the record will show that Mr. Sarkisian repeatedly denied to university officials that he had a problem with alcohol, never asked for time off to get help, and resisted university efforts to provide him with help. The university made clear in writing that further incidents would result in termination, as it did. We are profoundly disappointed in how Mr. Sarkisian has mischaracterized the facts and we intend to defend these claims vigorously.”

For more about football, watch this Fortune video: