AB InBev Confirms It Wants to Sell Grolsch and Peroni 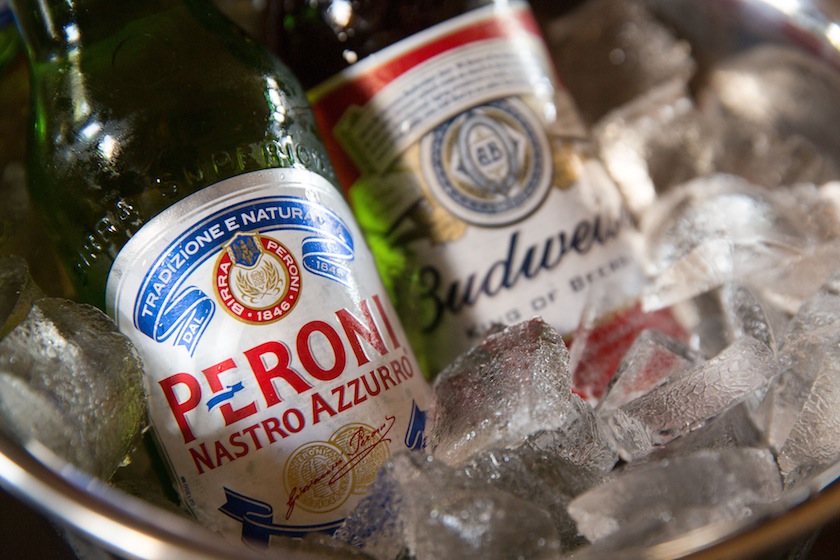 A bottle of Budweiser beer, brewed by Anheuser-Busch InBev NV, right, and a bottle of Peroni beer, brewed by SABMiller Plc, sit in an ice bucket in The Capitol, a JD Wetherspoons Plc public house in this arranged photograph in London, U.K., on Tuesday, Oct. 13, 2015. Anheuser-Busch InBev NV agreed to buy SABMiller Plc for almost 69 billion pounds ($106 billion) to clinch a record industry deal after several rejections, creating a brewer that will account for a third of all beer sales globally. Photographer: Simon Dawson/Bloomberg via Getty Images
Photograph by Simon Dawson — Bloomberg via Getty Images

Anheuser-Busch InBev is looking to sell SABMiller’s Grolsch and Peroni brands to address potential concerns among European competition regulators over its planned acquisition of the world’s second largest brewer.

The sale of the brands and their related businesses in Italy, the Netherlands and Britain would be conditional on AB InBev acquiring SABMiller in a cash and share offer currently worth some 72 billion pounds ($108 billion).

AB InBev (BUD) said on Thursday it was also looking to sell Meantime Brewing Company, the London-based craft brewer that SABMiller announced it was buying only in May.

Potential buyers for Grolsch and Peroni, which could each be worth some $1 billion, are not obvious, with obstacles for major brewing groups like Heineken and Carlsberg. That could leave private equity groups as the most likely bidders.

Facing a $3 billion break-up clause, AB InBev has a powerful incentive to facilitate the SABMiller deal. With Stella Artois and Beck’s, AB InBev already has European lagers that it is marketing internationally.

“What they really want is Africa and bits of Latin America. If you said they couldn’t include some SABMiller brands in Europe, you’d bet they’d take that,” said Societe Generale beverage analyst Andrew Holland.

With SABMiller, AB InBev is buying into countries such as Colombia and Peru and crucially, Africa, while markets such as the United States are weakening as drinkers shun mainstream lagers in favor of craft brews and cocktails.

Beverage analysts have identified the new company’s business in China, where SABMiller has a stake in market leader CR Snow, as a regulatory hurdle, but it is not clear whether EU regulators would insist on divestments in Europe.

The European Commission, which rules on antitrust issues in the EU, will carry out a full investigation because the combined market share would exceed 15% in at least one country.

In Italy, the new group would have 28.3% of the market, in the Netherlands 27.9% and in Britain 21.8%, according to beer market specialists Plato Logic.

However, Heineken would remain the leader in all three markets, with shares of 29.4% in Italy, 38.6% in the Netherlands and 27.5% in Britain.

AB InBev’s issue may be that, with Peroni, Grolsch, and Meantime, it would have too great a share of premium beers.

The Commission in the past has looked at specific segments of the market, such as its 2009-2010 review of the planned cooperation of British Airways, Iberia, and American Airlines on transatlantic routes.

Then it said that premium and economy classes could be considered as two separate markets. However, in brewing, premium is a vaguer concept.

Heineken would be excluded give its existing market share. Molson Coors, with business in Britain and eastern Europe, might be interested but could be too stretched in buying MillerCoors in the U.S.

Carlsberg is grappling with a struggling Russian business, although it might be able to do a deal if it sold shares.

Irish cider maker C&C could similarly be stretched and reluctant to expand until its U.S. business turns around.

That would leave private equity buyers, AB InBev having previously sold assets in Korea to KKR (KKR) and in eastern Europe to CVC, buying back the former in 2014.