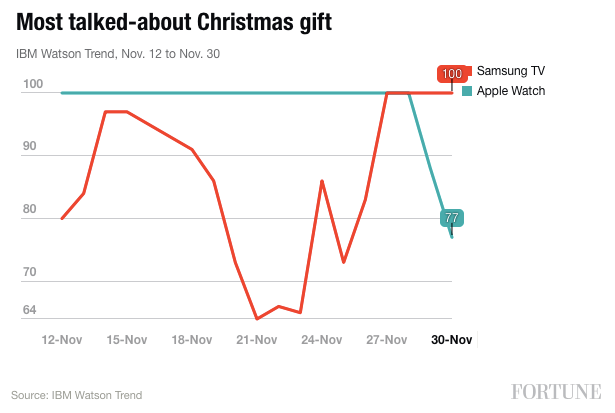 You know you’re paying too much attention to Internet analytics tools when you find yourself checking them several times a day.

I was dubious last week when Team Watson reported that the Apple Watch was a more talked-about tech gift than the iPhone—by a factor of 50 to 1—on the thousands of social networks, blogs, forums, comments, ratings, and reviews monitored by its supercomputers.

Sunday’s results, which show Samsung TVs pinned at 100 and the Watch dropping to 77 (on a scale of 0 to 100), conform more to what I’m seeing on the ground.

The clerk at the local BJ’s Wholesale Club who carried my new television set to the car Saturday said that big flat-screen TVs were the store’s Black Friday best-sellers. He’d personally sold 11 that day and 16 the day before.

Watson’s top 10, as of Sunday afternoon:

See also: Will This Be an Apple Watch Christmas?

For more Fortune coverage of Apple, watch the video below: