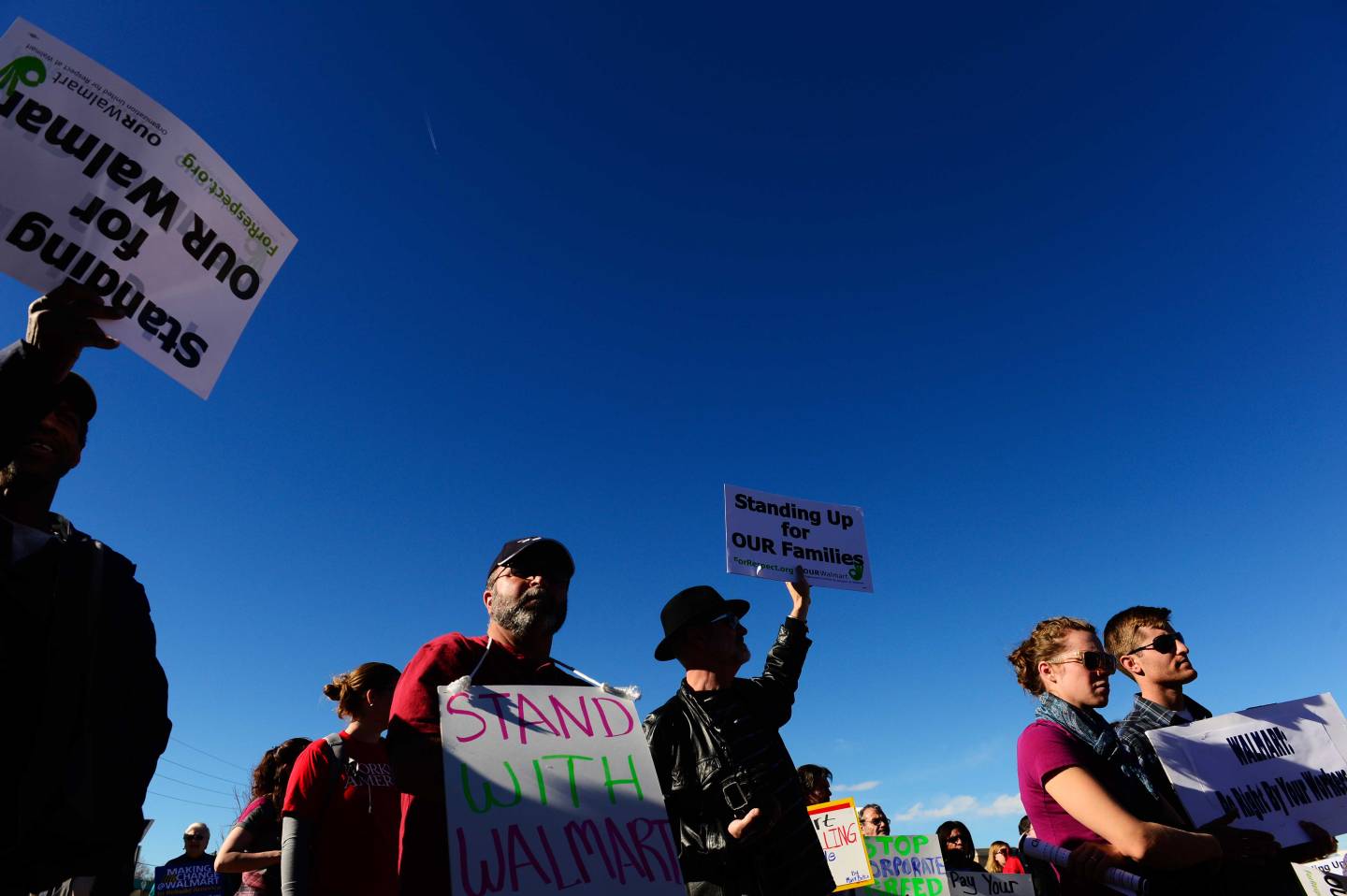 It just wouldn’t be Black Friday without a worker protest at Walmart.

A group that calls itself Our Walmart and advocates for workers at the retail giant is planning demonstrations at a dozen locations nationwide as it continues to push for a $15 per hour minimum wage and full-time status for workers.

Protests at the nation’s largest retailer have become a kind of Black Friday tradition ever since they began in 2012, when employees clamored for Walmart to end what they characterized as retaliation for speaking out for higher pay, fair schedules, and health care they could afford.

This year is somewhat different. Around nine months ago, Walmart announced that it would raise its wages. In April, it implemented a starting rate of $9 per hour that will increase to $10 per hour in February 2016. The Our Walmart group touts the wage increase as a victory, but it remains steadfast in its demand for $15 per hour.

Denise Barlage, who plans to protest outside the New York City condo of Walmart heiress Alice Walton on Friday, told Fortune that the wage hike won’t change protestors’ tone because they want $15 per hour—a true living wage, she says—not $9. Barlage was one of 2,200 workers Walmart laid off in April when the company temporarily closed five stores for plumbing repairs. She says she wasn’t able to get her job back and is now collecting unemployment benefits. Former workers at the Walmart location in Pico Rivera, Calif. where Barlage worked have filed a complaint with the National Labor Relations Board, claiming the layoffs were in retaliation for their organizing activity.

The $15 per hour rate has become a near universal demand of wage advocates in the United States. In February, Walmart spokesman Kory Lundberg told Fortune that the retail chain listens to its “critics,” and that the store’s new $9 starting wage “made sense for our associates.” Increasing the wage even more, he said, would have set “the first rung of the economic ladder too high,” making the jobs “unattainable” for workers seeking entry level experience. Following its wage hike, Walmart reportedly cut workers’ hours at some stores in an effort to reduce labor costs, though Lundberg told Bloomberg that those reductions only happened at locations where managers had over-scheduled workers.

The protests scheduled for Friday also come in the wake of an upheaval in the ranks of Our Walmart itself. There are now two separate groups that—confusingly enough—claim the Our Walmart name, which stands for Organization United for Respect at Walmart.

The original group was an independent, non-union organization under the umbrella of the United Food and Commercial Workers union. In September—after the UFCW fired two senior organizers who ran its Our Walmart arm—some members split from the UFCW-backed group, launching a separate organization under the Our Walmart moniker but with the support of several other activist groups, including the National People’s Action, Demos, and the National Domestic Workers Alliance. The latter group will be staging protests on Black Friday.

The UFCW, meanwhile, says it still owns the Our Walmart name, the group’s logo, and its Facebook page. On Tuesday, the union announced its own plans for targeting Walmart during the holiday shopping season. Instead of organizing demonstrations at Walmart stores this year, it’s launching 1,000 food drives in cities with Walmart stores to bring attention to how little Walmart workers are paid.

In response to Our Walmart’s planned demonstrations on Black Friday, Walmart spokesman Brian Nick said in a statement that Walmart’s average full-time hourly employee earns more than $13 an hour and has the chance for quarterly cash bonuses, a matching 401k. and health care benefits. “We know it takes quality [employees] to give our customers a great shopping experience,” he said, “and we’re proud of the wages and benefits package we offer.”