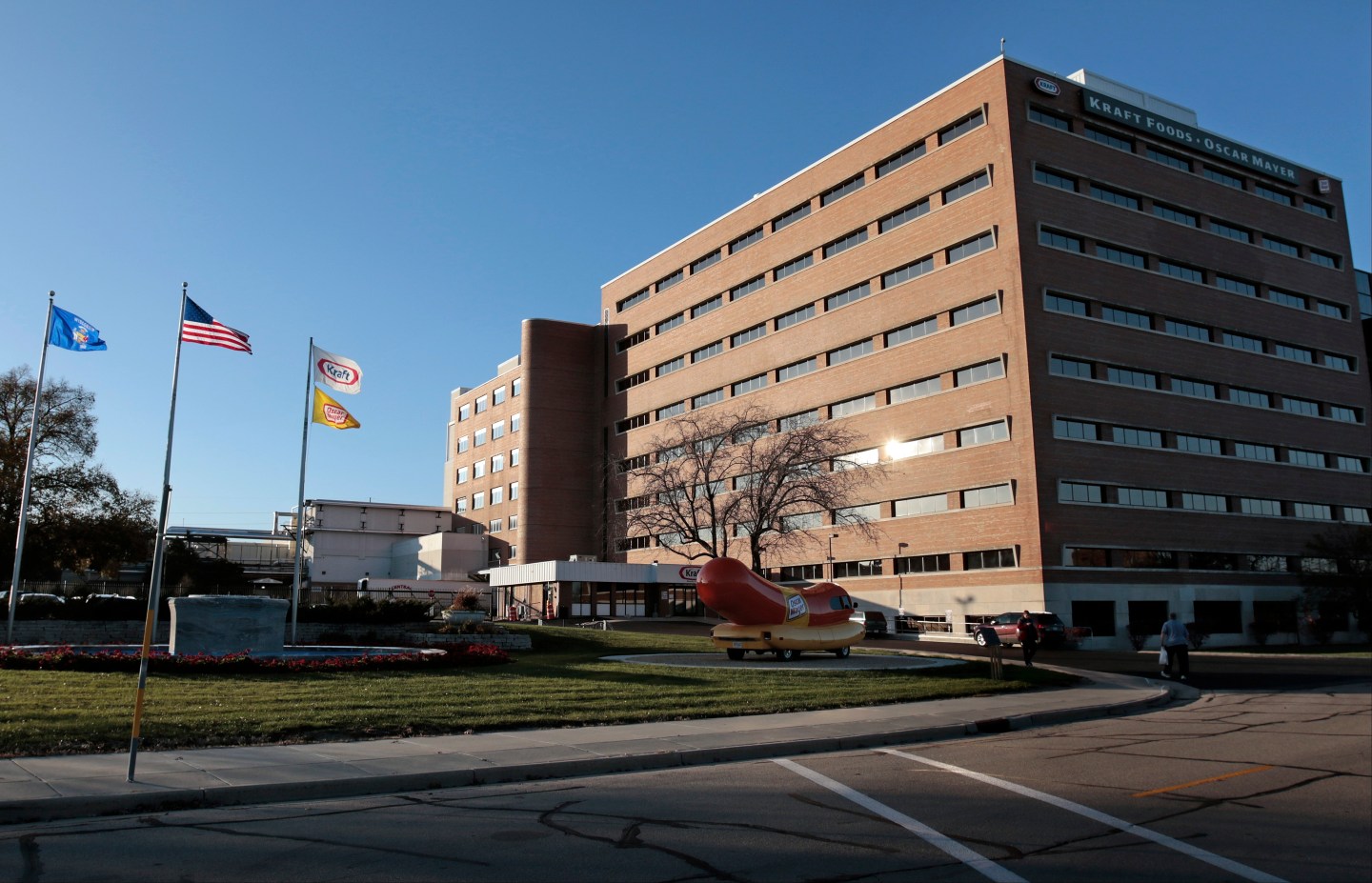 The Kraft Foods-Oscar Meyer headquarters and plant in Madison, Wis., is shown Wednesday, Nov. 4, 2015. The plant in Madison that has been around for nearly a century and currently employs about 1,000 people will close as part of business moves by the parent company, Kraft Heinz Food Co. announced Wednesday. (M.P. King/Wisconsin State Journal via AP) MANDATORY CREDIT
Photograph by M.P. King — Wisconsin State Journal via AP

A cold rain is falling in Madison, Wisc., though it’s cozy inside Wiggie’s—the local hangout for the employees of the Oscar Mayer plant, where a bunch of retirees have settled in for a lunchtime beer and a bite. Still, there’s a chill—not from the weather as much as the fact that on Nov. 4, Oscar Mayer parent Kraft Heinz announced it would shutter the 96-year-old meat-and-cheese processing factory at the beginning of 2017.

Around the stainless steel rectangular bar—a place that owner Dave “Wiggie” Wiganowsky says once was filled with workers handing over their paychecks in exchange for cash and a few drinks—the news still stings. “We’ve been worried about this for a long time,” says Dorothy Borchardt, a former Alderwoman in Madison’s 12th district, whose husband Dick put in 36 years at Oscar Mayer. “When Heinz bought it, the writing was on the wall.”

The Oscar Mayer facility isn’t just any old plant; it’s the site of the 132-year-old meat company’s first expansion and, for the past 58 years, its headquarters—not to mention the home of the Wienermobile. On Nov. 17, the Wienermobile sits idly in front of the factory, rain dripping down its sides; it’s an odd sort of paean to the past. The closing of the factory will leave 635 hourly workers and 72 salaried people without jobs in Madison, but that’s just one of seven plants that Kraft Heinz announced it would shutter on Nov. 4 in a plan to cut 14% of Kraft Heinz’s North American factory workforce. (Also included: another Oscar Mayer factory in Davenport, Iowa, although Kraft Heinz announced it would build a newer one nearby—funded in part by a lucrative $15 million incentive package from the State of Iowa and the city of Davenport. The new plant will employ approximately 475 workers— about one-third the number currently employed in Davenport).

Sitting in the United Food and Commercial Workers building right in the front of the factory, Doug Leikness looks dejected. “I’m feeling really, really terrible,” says the president of Local 538 and a third-generation Oscar Mayer employee of 31 years. Leikness, who is in charge of bargaining for the workers, says the company is offering incentives for employees to stay on until the close, but little more than standard severance beyond that. Still, he says, “I’d rather have a job than that extra nickel.”

It’s hardly news that yet another old American factory is closing down, particularly one that makes processed meats, which have declined in popularity as millennials look for healthier options. The Oscar Mayer plant in Madison makes hotdogs and bologna, and is also Kraft Heinz’s only producer of hard salami, Braunschweiger and liver cheese; a spokesperson says those will be produced elsewhere. It is also less-than-shocking that Kraft Heinz, the food giant caused by the merger of Kraft and Heinz earlier this year, is closing yet another plant. This, after all, is what 3G, the Brazilian investor group behind Kraft Heinz — along with Warren Buffett— does, generally to the delight of its investors.

Some 7,800 employees have lost their jobs since 3G bought Heinz in 2012, and the Brazilian firm’s ruthless efficiency is now making its way through Kraft via “zero-based budgeting,” an approach that requires that every single expense be questioned, from company discounts on Kraft food to the amount of copier paper that can be used. This approach has resulted in increased profits for many of 3G’s investments—which also include Burger King and, now, the just announced merger between AB InBev and SABMiller—although topline growth has been harder to come by. (See Squeezing Heinz for more on the process at Heinz.)

In the third quarter of 2015, Kraft Heinz posted pro forma revenues down 9% and profits down 4.3%. Yet on Nov. 5, the day after the closings were confirmed, the company announced it was raising its dividend by 4.5%. It’s also worth noting that Buffett’s Berkshire Hathaway, which co-invests with 3G in Burger King, Heinz and now Kraft Heinz, posted a $7 billion pretax gain on the investment in the third quarter.

Even before Heinz bought Kraft, the small-town ways of Oscar Mayer were changing, says Mike Judge, former head of consumer insights and strategy there and now Director of the Center for Brand and Product Management Center at the University of Wisconsin Business School. “It was always part of the fabric of the community,” with a homegrown leader at the helm, he says. That changed about three years ago when Kraft, which had owned Oscar Mayer since 1988, began to feel its own financial pressures and installed corporate executives from the head offices in Illinois.

The bigger lesson is that for every addition to corporate coffers, there is also a subtraction. In Madison, the workers must find new jobs, of course—no easy task in an increasingly service-oriented economy. Retirees are being transferred to new health care plans, with no increase in premiums for this year, at least; a document sent to retirees by the company says the pensioners will bear the cost of any increases in premiums going forward, and that the company has the right to change the plan at any time. Local charities like the United Way of Dane County, where 2.2% of its contributions came directly from Oscar Mayer workers last year, will be affected. And should the plant not find a new owner—it’s unclear whether a buyer exists at this point—Borchardt says real estate values in the neighborhood may fall, as they did when a GM factory closed in Janesville, Wisc. in 2008.

Then there’s the fact that the State of Iowa and city of Davenport are planning to incentivize Kraft Heinz to the tune of approximately $32,000 per worker over the next 15 years to locate the new factory there — despite the fact that there is a net job LOSS, not gain, of more than 800 workers. Is that the best use of public money?

“ The upside,” says Bruce Berger, Director of Community planning and economic development for the city of Davenport, “is that you’re retaining that many jobs with the hope that the factory can do well. The other option is losing all the jobs.”

Back at Wiggie’s, the mood is dark. Some blame the governor, Scott Walker, for announcing that Wisconsin was “open for business,” while jobs move elsewhere; others call the process of locating in the highest bidder’s home town simply a form of corporate blackmail.

“Kraft Heinz fully appreciates and regrets the impact our decision will have on employees, their families and the communities in which these facilities are located,” Michael Mullen, Kraft Heinz’s SVP of Corporate & Government Affairs, says in a statement.

It’s an impact that will reverberate for some time to come.