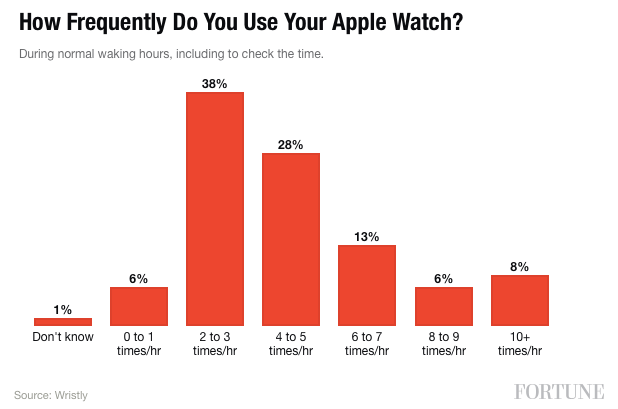 What do people do with a smartwatch?

Mostly they use them as watches, two new studies of Apple Watch owners report, checking the time 30 or 40 times a day in interactions that last an average of 3.8 seconds.

Then it gets interesting.

The chart above comes from a note posted Wednesday at Wristly.com, a Web-based research firm that conducts weekly surveys among some 2,400 Apple Watch (AAPL) owners. According to co-founder Bernard Desarnauts, the 1,450 respondents to this week’s survey use their watch an average of four to five times an hour, or 60 to 80 times a day.

The chart below comes from a study by Brown et al. at the University of Stockholm’s Mobile Life Centre. They gave a dozen participants—seven women, five men—Apple Watches and wearable cameras and captured on video 1,009 interactions over 34 days.

Brief interactions—checking the time, glancing at notifications—were the most frequent uses of the device. Interactions that took more time—launching apps, checking messages—were rarer. In the space of a month, the Apple Watch was used to take phone calls only eight times and to read mail only twice.

“With Apple Watch, usage interactions are measured in a few seconds,” writes Wristly’s Desarnauts, “and we have the data to show it.”

Desarnauts is one of the sponsors—along with Asymco‘s Horace Dediu and Techpinion‘s Ben Bajarin—of Glance: A Deep Look at Apple Watch, a day-long conference scheduled for Dec. 10 in San Francisco. For more information, click here.

For more on wearables, check out the following Fortune video below.