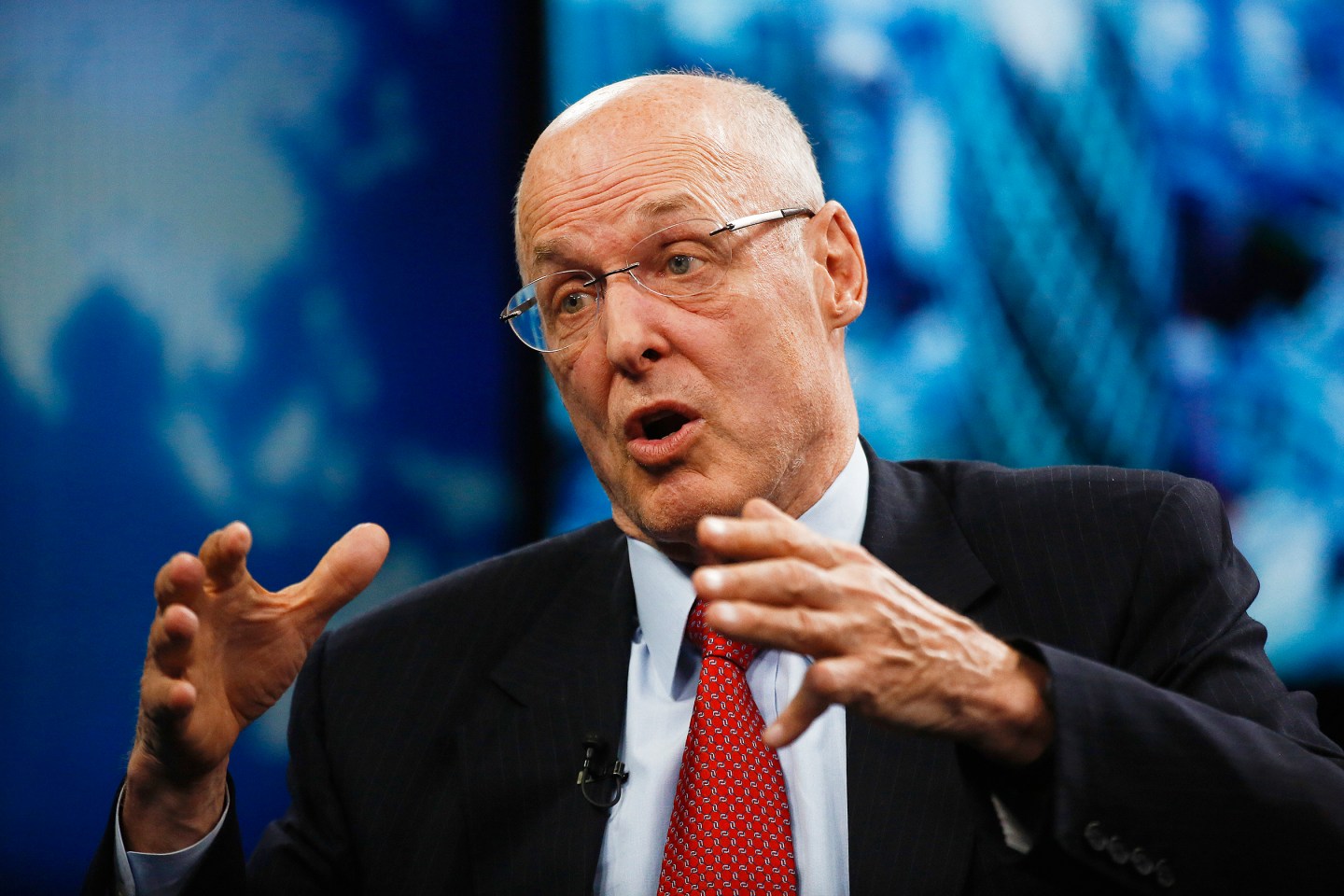 Henry "Hank" Paulson, chairman and founder of the Paulson Institute and former U.S. Treasury secretary, gestures as he speaks during a Bloomberg Television interview in London, U.K., on Monday, May 11, 2015. "For the U.K. to be economically relevant by far the best case is to be an economic leader in one of the biggest economic blocs in the world," Paulson said. Photographer: Simon Dawson/Bloomberg via Getty Images **
Photograph by Simon Dawson—Getty Images

On the outskirts of Beijing, one of the biggest housing projects in the world is taking shape. Two hundred acres of apartments are being tailored for low-income residents priced out of the center of the 22-million-person capital city, with construction slated for completion next year. The $1 billion project, BeiAnHe (“North Peaceful River”), may become a model for the rest of China, where some 300 million people will move from the countryside to cities during the next two decades. But it’s also a proving ground for Hank Paulson and his efforts to improve relations between the U.S. and China.

The Paulson Institute, a nonprofit founded in 2011 by the former Treasury secretary and Goldman Sachs (GS) chief executive, has connected American and Chinese businesses to work toward a common goal: improving energy efficiency in China. Last year at the institute’s inaugural U.S.-China CEO Council for Sustainable Urbanization, which brought 16 CEOs to Beijing, Dow Chemical (DOW) and the China State Construction Engineering Corp. (CSCEC) forged a relationship through which Dow is helping make BeiAnHe a “green” project. And Paulson expects such partnerships to snowball. “Business has been the ballast” of U.S.-China relations, he tells Fortune. When diplomacy is tense, he says, he wants his CEO council to both pursue sustainability and “deepen the relationship.”

Paulson’s optimism faces a test these days, as tensions between the two countries are the highest they’ve been in years. Cyber-espionage has soured business relations: U.S. officials say China’s government has backed commercial hacking programs that target the intellectual property of U.S. industrial companies, an assertion China denies. And political conflict has flared in the South China Sea, where China has built islands on top of reefs in order to make territorial claims on surrounding waters. In late October the U.S. Navy sent a destroyer within 12 nautical miles of the “islands,” a move that China’s Foreign Ministry called “provocative.”

Still, Paulson is better positioned than most Americans—certainly those clamoring after their parties’ presidential nominations—to calm the waters. The former cabinet member (anyone who addresses him as Secretary Paulson is quickly corrected—“It’s just Hank”) has longtime relationships with leaders and officials in China, having helped Goldman Sachs grow in the country in the 1990s and then having led the Treasury Department from 2006 to 2009. Among his noteworthy collaborators from the Goldman days: Wang Qishan, then head of a state-owned Chinese bank and now a member of the Politburo Standing Committee that rules China.

Lately, Paulson has brought executives together under the umbrella of combating pollution—an area where China faces huge challenges because of its heavy reliance on coal. His organization has focused on energy-efficient buildings because the fixes are usually easy but also environmentally crucial. About 40% of global greenhouse-gas emissions come from buildings, the Paulson Institute says, and as much as 50% of the world’s new buildings are going up in China. “The cheapest and cleanest energy is the energy you don’t use,” Paulson says.

China officially approves a high number of plans for green residential and commercial buildings, but builders seldom follow through because of lax enforcement. And Western manufacturers like Dow have better energy-efficiency technology than their Chinese counterparts. If they collaborate, Paulson reasons, U.S. companies will get better access to projects across China, while Chinese builders can get the innovative materials they need to meet strict government energy mandates.

High-rises under construction, cloaked in heavy smog in Beijing. About 40% of global greenhouse-gas emissions come from buildings.Photograph by ImagineChina/Getty Images

The outsize Beijing housing project will test his approach. State-owned CSCEC is the largest builder in the world—with 7,000 projects spanning Africa, the Middle East, and China’s interior. Last year at Paulson’s council, the builder’s then-chairman, Yi Jun, joined Dow CEO Andrew Liveris in a small group discussion about building efficiency. Out of the session came an understanding between the two companies, and Dow now plans to sell CSCEC special paints and polymers for the project. The energy-efficient materials aren’t cheap—in fact, Chinese companies on Paulson’s council worried about the cost. So Paulson’s staff is now working with Chinese officials to create a fund through which U.S. and Chinese investors could subsidize energy-efficiency products sold by U.S. companies. (Details on that fund should be worked out in the next six months.)

Cooperating on technical projects in China can be a sore subject for U.S. executives, given problems over the years with China’s inconsistent protection of foreign companies’ intellectual property rights. But American members of Paulson’s CEO council say they see progress on that front. “Because [Chinese companies] are becoming more innovative themselves, you see improvements in IP protection,” says David Cote, CEO of manufacturing giant Honeywell (HON), whose second-largest market after the U.S. is China.

Paulson’s latest CEO round-table took place in October, at Beijing’s Diaoyutai State Guesthouse, a preserve of lakes and flowers reserved for visiting dignitaries and VIPs. IBM CEO Ginni Rometty urged collaboration on technology to solve energy and environmental challenges, while Paulson called for an elimination of tariffs on environmental goods and services, calling such levies “immoral.”

Paulson says that even incremental environmental changes have outsize effects in China, whose economy contributes one-eighth of the world’s GDP but uses one-fourth of the world’s energy output. He’s betting that the same idea—small changes, big impact—will apply to the business partnerships he’s forging. The U.S.-China relationship is “under stress for a variety of reasons,” Paulson says. “But there are many more common interests than differences.”

A version of this article appears in the December 1, 2015 issue of Fortune with the headline “A China Hand’s Green Plan.”