Here’s What You Should Know About the Paris Attacks 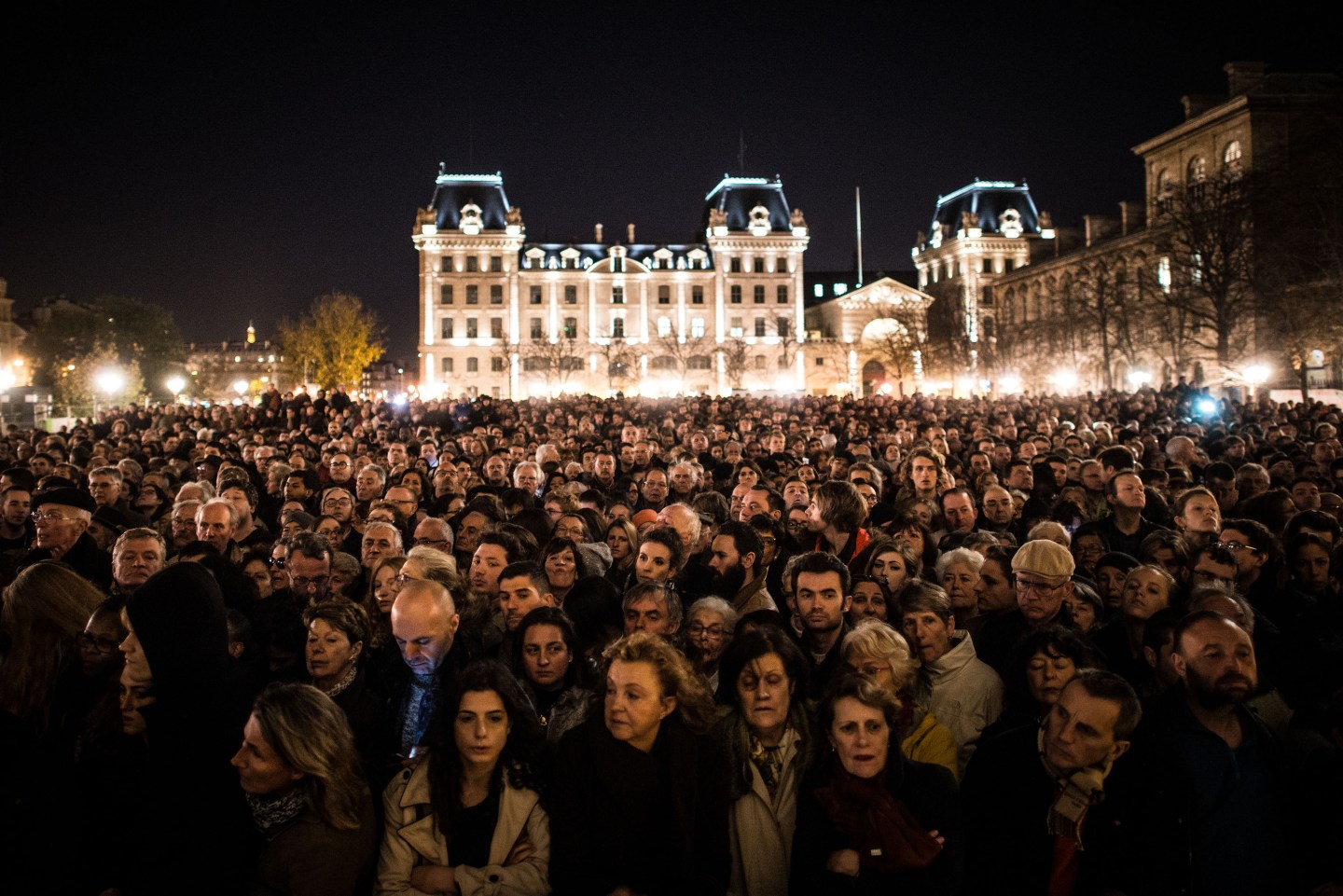 PARIS, FRANCE - NOVEMBER 15: People gather outside of Notre Dame Cathedral ahead of a ceremony to the victims of the Friday's terrorist attacks on November 15, 2015 in Paris, France. As France observes three days of national mourning members of the public continue to pay tribute to the victims of Friday's deadly attacks. A special service for the families of the victims and survivors is to be held at Paris's Notre Dame Cathedral later on Sunday. (Photo by David Ramos/Getty Images)
Photograph by David Ramos via Getty Images

Paris was targeted in a series of terror attacks spanning the city on Friday night when a France-Germany soccer game ensured a large crowd. At least 132 people have been killed, and French president François Hollande has officially declared a state of emergency. News sites are milling out the facts as they come, and social media is saturated with moral support for the country. Here’s what we know so far.

The attackers were Islamic State militants. Following the attacks, ISIS released a statement claiming responsibility. The group sent in eight fighters with suicide bombing belts and machine guns to “Let France and all nations following its path know that they will continue to be at the top of the target list for the Islamic State and that the smell of death will not leave their nostrils as long as they partake in the crusader campaign.” The New York Times reports that three of the attackers were brothers. One died during the attacks, and another was detained in Brussels on Saturday. French authorities are currently searching for the third brother, Abdeslam Salah. They have released his photo to the public but warn that he’s dangerous, and say that, if they spot him, civilians should not intervene on their own “under any circumstances.”

Refugees are now in crisis more than ever. It has been reported that at least one of the attackers smuggled into Paris with refugees. Republican presidential candidate Jeb Bush appeared on State of the Union with Jake Tapper this morning to discuss the evolving concern of terrorism. He echoed multiple other candidates in saying that we need to eradicate ISIS, adding that we have to be very careful when taking in refugees. He advocates more thorough screening and limiting the number that we accept in order to prevent national crises both in the U.S. as well as in other countries. He asserted, “This is a warning for our country that this threat is not going to go away. This is a threat against western civilization, and we need to lead.” ISIS claims that these attacks are the “first of the storm.”

The European economy could see a change. Despite the EU’s proud achievement of eliminating internal borders, the migrant crisis has encouraged some countries to reinstate border checks. As Fortune reports, it’s likely that after these attacks more countries will follow and, if they do, it will have an adverse effect on cross-border trade and the trucking industry. Some may also lose confidence in European businesses as it may seem like the continent is in a state of unraveling.

Paris is not the only city that ISIS attacked this week. The warm wave of support on social media has sparked others to remind Facebook friends and Twitter followers that this is not the only attack. Just one day earlier, ISIS took credit for a double suicide bombing in Beirut, Lebanon that claimed the lives of at least 43 people and injured hundreds more. The New York Times describes it as “the worst attack to strike the city in years.” ISIS currently controls parts of Syria, which shares borders with Lebanon. ISIS declared that it had targeted Shiite Muslims, whom the group believes are apostates because they do not share the same extremist views. The targeted neighborhood housed both Palestinian and Syrian refugees.