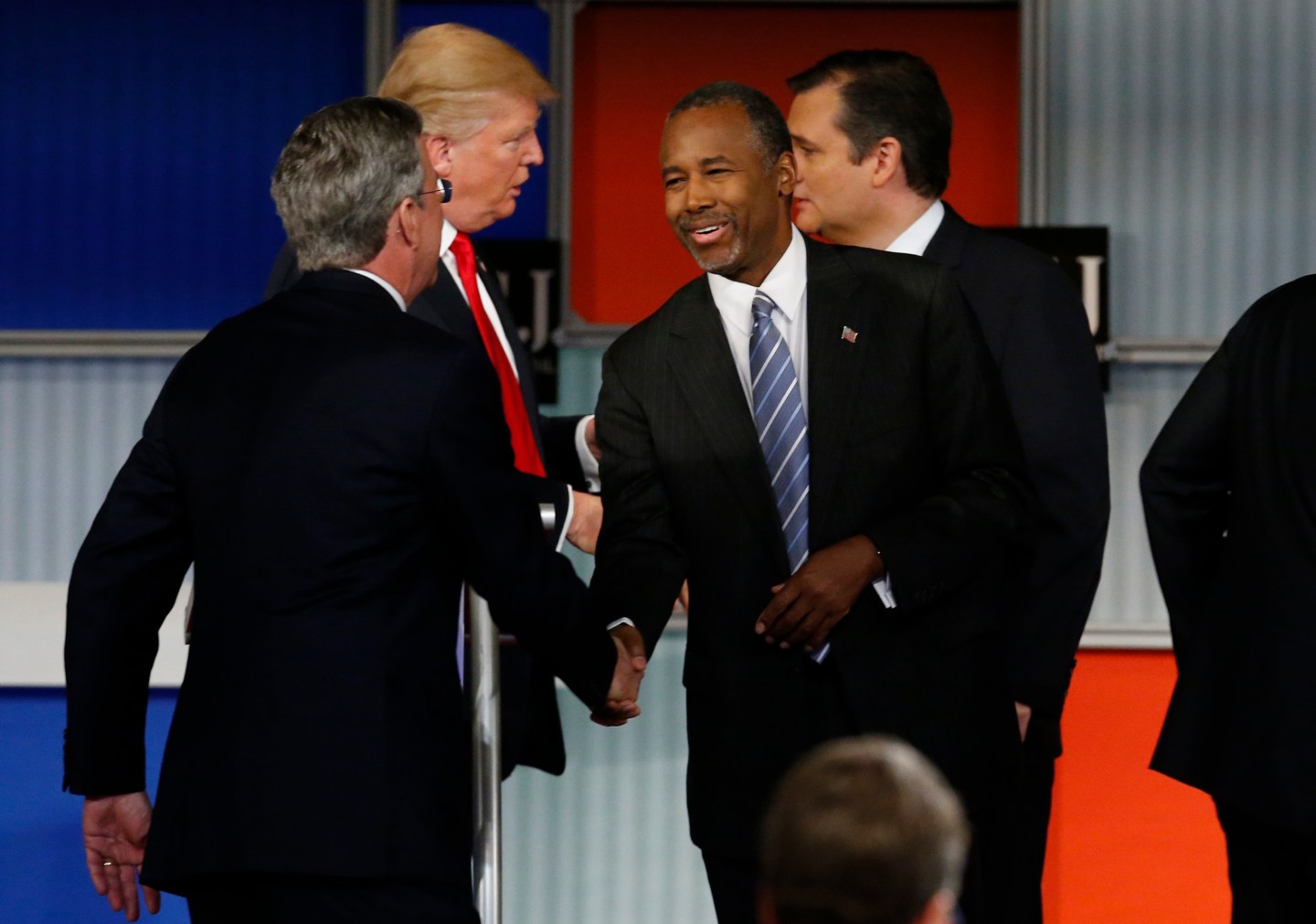 Will the real fiscal conservative please stand up?

While Tuesday night’s Republican presidential primary debate could be considered more “substantive” than previous showdowns, it still failed to show who among the main candidates has what it really takes to set the U.S. economy on course.

The outsiders of the bunch (Trump and Carson) were clearly out of their element discussing complicated economic topics, while the policy wonks and established politicians (Cruz and Bush) fell victim to their own ignorance regarding everything from banking regulation to monetary policy.

The loser in all of this mess continues to be the moderate fiscal conservative. No, not the members of the far right who want to shut down the government and default on the national debt, but the silent majority of Americans who are concerned about the nation’s fiscal deficit and its burgeoning debt load.

While all the candidates claim to be “conservatives,” none has presented a realistic and cogent plan that encourages economic growth while reining in spending. For example, it’s fun to talk about instituting a flat tax or getting rid of a disliked portion of government bureaucracy, like the Internal Revenue Service, but neither are truly viable options. The revenue forgone by moving to a regressive tax scheme would cause a severe imbalance in the national budget, requiring cuts that go far beyond the shuttering of a few government agencies—even if you close that agency twice.

Senator Rand Paul was the only candidate on the main stage on Tuesday to address the concerns of fiscal conservatives, albeit with limited success. In one of the rare interruptions during the soporific debate, Paul challenged the validity of Marco Rubio’s “pro-family” tax plan, which would give huge tax credits to families with children.

“Is it conservative to have $1 trillion in transfer payments—a new welfare program that’s a refundable tax credit?” Sen Paul said. “Add that to Marco’s plan for $1 trillion in new military spending, and you get something that looks, to me, not very conservative.”

The flustered Rubio shot back like a child who was just told he couldn’t have a toy. “This is their money,” he said. “This is not our money.”

No matter whose money it is, if you reduce the revenue coming in to the government, you reduce its ability to spend. That’s fine if you have a huge surplus and rocketing growth, but that’s not the case in the U.S. As Paul pointed out, Rubio not only wants to cut taxes but he also wants to ramp up military spending, even though the U.S. spends more on defense than the next 10 biggest spenders combined.

We know that severe government austerity can backfire (see Europe) and that it is not always a terrible thing to run a budget deficit (see the U.S.), but that doesn’t mean the government can just spend with impunity forever. Cutting taxes could legitimately stoke economic growth, but that would mean running up the deficit. Not all government spending is wasteful—much of it, like defense, supports a lot of jobs and employs millions of people. Cutting those programs could end up hurting economic growth.

The candidates have all failed to present a plan that would strike the right balance between taxes and spending. Even Rand Paul, who labeled himself at the end of Tuesday night’s debate as the “only fiscal conservative” running, acknowledged that his plan, which would cut taxes to a flat 14.5% across the board, would drive the country deeper into debt. The Tax Foundation’s analysis of Paul’s plan concluded that it would cost nearly $2 trillion over a 10-year period, with an average annual cost of about $200 billion. And what do we get for adding an extra $2 trillion to the national debt? Economic growth that will average around 1.2% a year.

The worst part of all of this is that Paul’s plan is probably the most cogent one out there. The rest of the candidates offer up either hopelessly vague plans or fantastical ones that overstate their ability to generate economic growth. It is hard to justify a regressive tax scheme when the rich in this country pay the lion’s share in taxes. So for all you fiscal conservatives out there, it’s pretty clear that your candidate has yet to show up to the party.