What It’s Like to Watch Alibaba’s Singles Day Spectacle 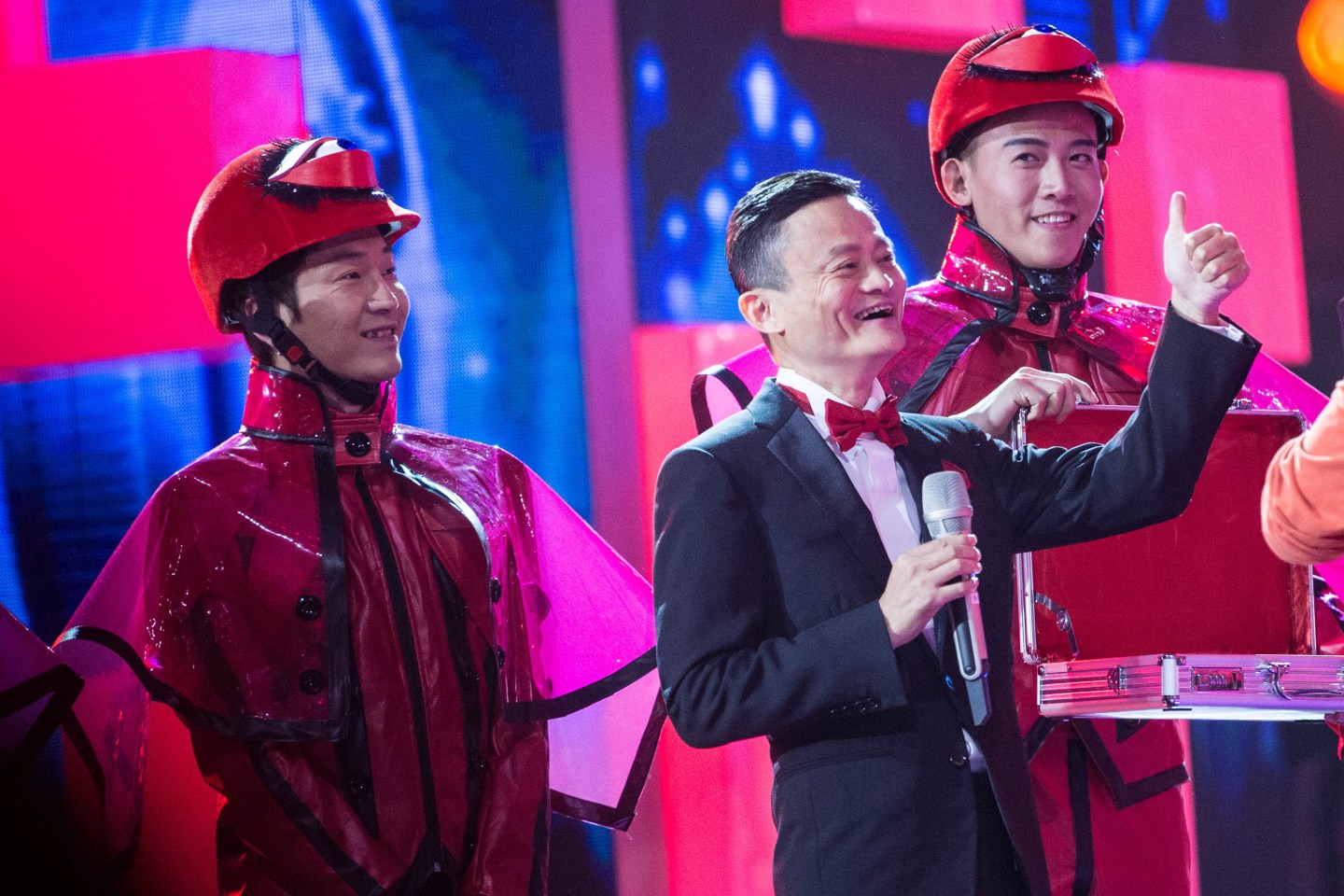 BEIJING, CHINA - NOVEMBER 10: (CHINA OUT) Alibaba Chairman Jack Ma attends the ceremony of 2015 Tmall 11.11 Global Shopping Festival at the Water Cube on November 10, 2015 in Beijing, China. Alibaba Group and Hunan television held a ceremony at the Water Cube (aka National Aquatics Center) for the 2015 Tmall 11.11 Global Shopping Festival which attracted consumers to shop on Tmall.com with discounts on November 11 which was also called the "Singles Day". (Photo by ChinaFotoPress/ChinaFotoPress via Getty Images)
Photograph by ChinaFotoPress via Getty Images

“Hey international media, your bus will be here soon,” announces Jimmy Haber, an Alibaba communications guy from San Francisco who made the 5,600-mile trip to Beijing for the company’s biggest –and China’s biggest –commercial holiday. Eighty foreign reporters have descended on Beijing for the midnight start of the biggest online shopping day in the world, joining more than 400 Chinese reporters to cover the three-hour variety show that eventually led to the midnight start of Singles Day (November 11, or 11/11). A mostly meaningless holiday invented by some lonely Chinese college kids in the ‘90s, Singles Day has since been co-opted by the e-commerce giant for online shopping. Alibaba sold $9.3 billion worth of goods last Singles Day; it makes Cyber Monday look quaint.

At the Water Cube’s entrance, crowds of young people armed with smartphones and selfie sticks push and jostle each other for the chance to glimpse Chinese pop stars, TV celebrities and one-time “American Idol” finalist Adam Lambert (headlining after Shakira was rumored to have bowed out) performing at Alibaba’s gala. A couple of listless riot police stand guard near what looks like a pile of cattle prods laying on the ground.

Alibaba used to host the Singles Day gala at its headquarters in the southern city of Hangzhou, but this year decided to stage the event in Beijing, in what analysts called a strategic move to grow closer to the government and grow the event even bigger. In the U.S. last year, online shopping during Cyber Monday and the day after Thanksgiving climbed to $6.6 billion. The researcher IDC forecast Singles Day sales this year to climb 40% to $13.8 billion; preliminary figures suggest Alibaba beat that mark by half a billion dollars, as Fortune reports today.

“Black Friday is being replaced by this,” says Duncan Clark, a consultant in Beijing and San Francisco who has a book coming out in April about Alibaba’s rise. Clark sits in the front row of 16 rows of press desks inside the Water Cube, near a two-story screen that loops commercials for Alibaba’s Tmall platform. In one, a compulsive Chinese shopper pokes an alligator in the mouth with the same rapid motion he uses to scroll through Tmall goods on his smartphone. Flanking the screen are two animated cats with “11.11” for eyes and a nose. “This is the beginning of my book,” Clark says of the spectacle.

Clark likes to describe the transfer of retail power from the U.S to China. The world’s second largest economy will soon pass the U.S. in retail sales figures because of its sheer population of 1.35 billion people. But its online merchants have the added advantage of selling to hundreds of millions of Chinese in far-flung cities, away from the eastern hubs of Beijing and Shanghai. These consumers rely on e-commerce much more heavily than Americans do; they never really became accustomed to shopping at department stores or big-box retailers because they never arrived in their towns. Alibaba’s Taobao and Tmall, and competitors like JD.com, are their Wal-Marts, Macy’s and Home Depots all rolled into one.

American singer and songwriter Adam Lambert performs during the 2015 Tmall 11.11 Global Shopping Festival at the Water Cube on November 10, 2015 in Beijing.Photograph by ChinaFotoPress via Getty Images

Just before 8 p.m., Alibaba CEO Daniel Zhang appears on the multi-story screen in a live feed from Alibaba’s command center in Hangzhou. He is not a natural salesman like founder Jack Ma, who lightens any interview with a quick smile and jokes delivered in English. But Zhang is a smart tactician—he’s said to be the key architect of Alibaba’s first Singles Day, back in 2009. What was then a Chinese experiment in invented consumerism is slowly becoming more of an international event thanks to Alibaba’s overseas sales, part of the business the company is pushing hard.

When Fortune asked Zhang this week how this year’s Singles Day would be different, he answered, “First, 11/11 is going global.” On screen, Zhang referred to Singles Day as the “Tmall global shopping festival.” His red T-shirt read, “Rock the World.”

But Tuesday also brought a reminder that Alibaba’s global ambitions face more hurdles than it likes to talk about. Leading up to Singles Day, the Wall Street Journal published a report profiling a Louisiana rapper named Chance Jolivette and his penchant for buying fake Nike shoes on Alibaba’s global platform. “I find the cheaper shoes on AliExpress,” he says, estimating he’s spent $1,000 on 20 pirated pairs.

Global issues were far from anyone’s mind Tuesday night in China, where Alibaba collects almost all of its revenue. Alibaba staff has worked 15-hour days for a week getting ready for Singles Day, where the biggest audience is China. As part of the gala’s theatrics, there’s a series of competitions between 10 celebrity hosts wearing either red or black. In one match, they sing into oscillating microphones while trying not to fall off narrow, foot-high perches, before going on to play king of the hill in a ball pit. “What’s the point of being at this event if I can’t tweet snide comments about it?” one reporter jokes, after his virtual private network that bypasses China’s Great Firewall (which blocks Twitter, Facebook, WordPress, among other western creations) fails.

The song and dance numbers are mostly Chinese hits, but in one performance half a dozen men push around women in shopping carts as a bubbly singer repeats the chorus in Chinese, “I’m happy shopping.”

The gala, broadcast on the Hunan province TV channel, feels similar to China’s campy Spring festival program, which commands higher ratings than the Super Bowl, but with a more commercial feel. Viewers at home predict whether the red or black team will win more events; winners get a 1 yuan (16 cents) box of milk.

Actor Daniel Craig (second from left) and Alibaba Chairman Jack Ma (right) at the 2015 Tmall 11.11 Global Shopping Festival at the Water Cube on November 10, 2015 in Beijing.Photograph by ChinaFotoPress via Getty Images

But the night is really about shopping. At around 9 p.m., Cloud Cui, a reporter at China’s Sohu.com outlet, scrolls through a selection of pants on Uniqlo’s store hosted on Tmall. Khakis regularly priced at 249 yuan ($40) had a Singles Day price of 100 yuan ($16). “I’ve had a lot of work to do, so I haven’t had time to look,” Cui says. To buy at the discounted price, consumers have to be skillful and lucky. You can place the khakis in your shopping basket, but you have to log in sometime after midnight to pay before supplies run out. (My Chinese teacher set her alarm for 11:55 p.m. so she could wake up and buy clothes for one of her foreign students before they ran out.)

At 11:47 p.m., Jack Ma, dressed in black tuxedo and red bow-tie, appears on stage with Daniel Craig, promoting his role in a new James Bond movie, to finish the games between red and black. Black wins. Sixteen-cent milk for those at home who guessed right.

A communications person from Alibaba’s Alipay affiliate explains that in the first minute of selling, the payment system handled 85,900 transactions per second. Alipay was hoping to break Mastercard’s previous record of 60,000 transactions a second. Singles Day is shaping up to be the record day Alibaba hoped.

By 1 a.m., the party starts to die down in the same way a New Year’s party does once the champagne has run out. Reporters yawn. The free Red Bulls are gone. Same for the packaged snacks of spicy pork and tofu. The Alibaba merchants invited to the gala on the other side of the Water Cube have left. Sales figures continue streaming across a large screen: more than 24 billion yuan in transactions in the first hour. Reporters for China’s state-owned media ask foreign reporters for their take on the great success.

An Alibaba press release goes out at 3:40 a.m from Hong Kong highlighting the numbers. The researcher IDC turned out to have lowballed its estimates. Before noon the next morning, total value of transactions have passed last year’s total of $9 billion. Someone from Alibaba says a BMW dealership abroad sold their entire stock of cars in the first morning.

Reporters board another bus Wednesday afternoon in time to see news on the screen. “Alibaba breaks Singles Day record.” By the time midnight approaches, Alibaba announces its latest (unaudited) total: $91.2 billion yuan ($14.32 billion) in sales. The countdown to next year has begun.

For more on Alibaba, see this Fortune video: