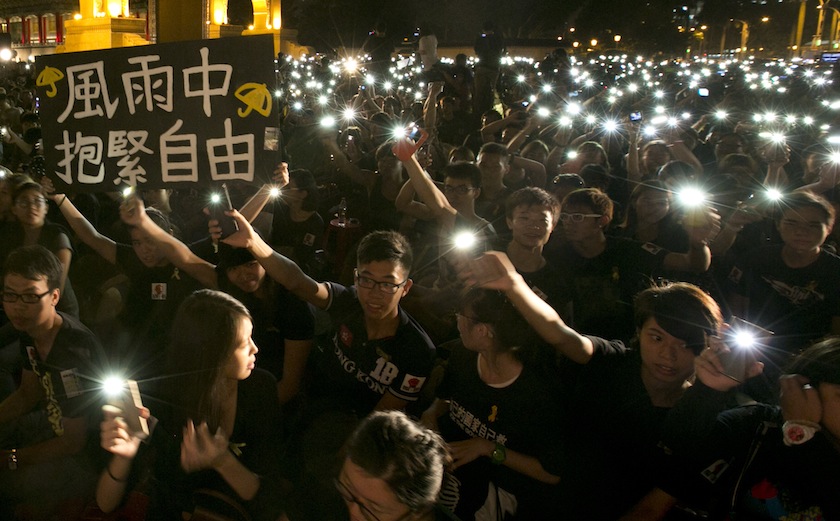 TAIPEI, TAIWAN - OCTOBER 01: Hundreds of students raise their cell phone with one sign reading "hold on to freedom in the rain" in front of Liberty Square to show support for Hong Kong pro democracy rallies on October 1, 2014 in Taipei, Taiwan. Thousands of pro democracy supporters continue to occupy the streets surrounding Hong Kong's Financial district. Protest leaders have set an October 1st deadline for their demands to be met and are calling for open elections and the resignation of Hong Kong's Chief Executive Leung Chun-ying. (Photo by Ashley Pon/Getty Images)
Ashley Pon Getty Images

China’s president Xi Jinping and Taiwan’s president Ma Ying-jeou are meeting each other this weekend in large part because the countries’ economic ties have never been closer.

The meeting is historic. It’s the first one between ruling heads from both countries since the Kuomintang Nationalist Party lost the Chinese civil war to the Communists in 1949 and fled to the island. Taiwan is a democracy that considers itself a sovereign state; mainland China is an authoritarian one-party system that considers Taiwan a runaway province. Beijing has pushed hard to keep Taiwan out of international systems, like the United Nations.

The meeting is coming at a time of lame-duck status for president Taiwan’s Ma Ying-jeou, who has accommodated China with a pro-trade agenda more than the country’s pro-independence forces would wish.

Last year total trade between the countries climbed to $130 billion, up from $113 billion in 2010, more than double Taiwan’s trade with the U.S. in 2014, according to Taiwanese figures.

Observers aren’t expecting anything substantive to come out of the Xi-Ma meeting, which will be held on neutral ground in Singapore. However, they’re quick to point out how China is shifting its approach to adversaries.

Trade increased dramatically between China and Taiwan during Ma’s presidency thanks to new agreements. So has mainland Chinese travel to the island, thanks to lessened restrictions. But his party is behind in the polls for the next presidential election on January 16, and the prospects of a left-leaning Democratic Progressive Party win will likely bring back tensions with China. Last year students barricaded themselves inside Taiwan’s legislature for almost a month, demanding changes to a trade services agreement with China. Earlier this spring, Xi Jinping said that pro-independence forces created the biggest danger for peace in the Taiwan Strait.

Today, hundreds in Taipei are protesting the Xi-Ma meeting.

Or in other words, to keep trade flowing amid the latest political tensions stretching back more than six decades.