A Former NFL Exec Wants to Bring Back the USFL 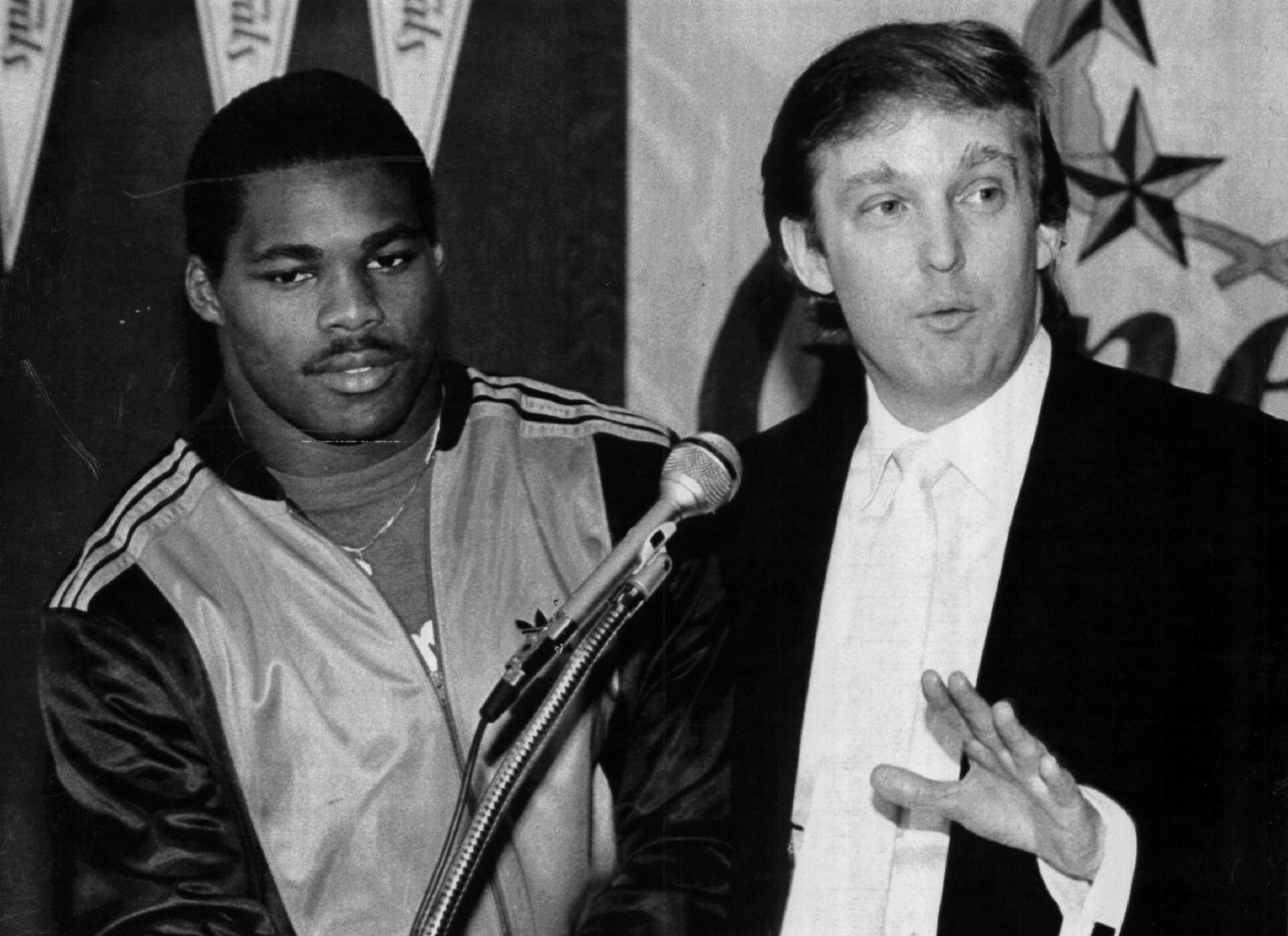 Remember the United States Football League? It lasted just three seasons, from 1983 to 1985, and to some its memory is a punchline. But Jim Bailey, a 21-year veteran of NFL management, wants to bring it back.

Bailey was executive vice president of the Cleveland Browns for 17 years, then held the same title with the Baltimore Ravens for four years until 2000. For the next decade he did what a lot of former sports executives do: ran his own consultancy. But in 2013 his San Diego group EndZone Management acquired the rights to the USFL for an undisclosed sum. The plan? To bring it back not as a competitor to the NFL but as a feeder league. The NFL does not have a separate developmental league; Bailey wants the USFL to become that.

First, there’s the checkered history: many remember the USFL for its association with Donald Trump, who purchased the New Jersey Generals for a reported $9 million (Trump has said he only paid $5 million), spent big to recruit big-name stars like Doug Flutie, and then led a group of owners in taking the NFL to court. (It did not go well.) “We’re going to have a league that’s going to be just as valuable as the NFL, or we’re going to have a merger,” Trump said at the time. But in 1985, the league shut down. This time, Bailey says, no Trump, no billionaire owners; the league will own all the teams.

Second, there’s the money. Bailey and his board aim to raise $5 million in order to cover initial marketing costs and raise more money. The amount looks small, but they’ve been unable to get it. Bailey remains optimistic: “We think there’s plenty of appetite for football in the spring.” He spoke to Fortune about the USFL’s future. What follows is an edited transcript.

Fortune: Do you think people remember the USFL, and if so, how do they remember it?

Jim Bailey: Oh, people do remember it. People seem to have a fond memory of it, more so than I would have envisioned. My view of the USFL is as a rival that was costing us a lot. That said, everything that they were, we are not going to be. We are strictly a developmental league. We’re going to work with guys who have been in NFL camps that didn’t make it, that need more time to mature or to learn the pro system. The pros don’t have time to nurture guys. So that’s our focus.

The first person that comes to mind would be someone like Michael Sam, who got a lot of press but ended up on a practice squad, and then got cut.

Right. That would be someone with a little more notoriety. But a lot of the guys will be guys in NFL training camp who you don’t see a lot of in the preseason, who are known for their college careers. Offensive linemen don’t get a lot of press. But there are a lot of good players out there every year, who, you hear the coaches and scouts say, “I think this guy can play but we don’t have the time to develop him.” So I think the need for a developmental league is there.

How will your USFL operate differently from the one in the 1980s?

The league will own the teams and employ the players and the coaches. And the main thing we’re going to do that others didn’t do is make sure we’re more than fully capitalized before we kick off. The USFL, they spent way more than they could afford to spend. We’re being very realistic and conservative in our financial projections, and making sure we have enough money to sustain us regardless of what happens. We know there will be surprises.

Many people blame Donald Trump for the league’s demise the first time. Do you see it that way?

I think what doomed the old USFL is the same thing that has plagued several other efforts: they outspent their resources. In Trump’s case, he did that quite deliberately, planning to achieve parity with the NFL via their antitrust case. Although Trump has become the poster child for this, he had several other USFL owners in his corner. Individual team owners, like Mr. Trump, tend to become competitive and overspend to get the best talent. We want to make sure our league lives within its means.

You make it sound as though financing is the big hurdle—and once you’re financed, you’re off to the races. What about obtaining players? Won’t that be difficult?

We’re getting calls now every day from prospective players. So I don’t think that’s going to be difficult. We will first hire coaches—and we hope it’s a developmental league for coaches as well, we hope for young guys looking to refine their craft and move up. And we’ll rely on them to do a lot of the scouting for us. And we hope it’ll be a training ground for referees as well. So I think there’s going to be plenty of players. If they meet the eligibility requirements, which will be the same as the NFL, we’ll sign them and allocate them to a team.

I think there are about 3,000 players that go to training camp per year. [Author’s note: It’s exactly 2,880, since each of the 32 teams is capped at 90 men for training camp.] And 2,000 of those guys end up staying with the team in some form. [Author’s note: 1,696.] That’s a thousand guys a year that were good enough to go to camp that are now out of football. And those are the guys we’ll be looking for.

Do you guys need the NFL’s buy-in for this? Do you need to partner up with them? Or you can just operate independently and they can evaluate each player on his own merit?

They will do that regardless. Having been with a team, I can tell you they won’t take our word on anything. But as far as affiliation with the NFL, we are planning to operate independently. The NFL is aware of us, and we haven’t asked them for anything and don’t intend to. As we develop, something may or may not develop, but we plan to operate independently indefinitely. We want to provide a system of development for these guys to give them a wider talent pool.

What will the exact structure be?

We’re going to play in the spring and finish our season in July, just before the start of the NFL camps. We’ll have eight teams play a 14-game season, and a two-week playoff with four teams in the playoffs. Our players will be free to sign with the NFL at any time. We’re going to be like minor league baseball.

Although in minor league baseball, each pro team has an affiliated minor team.

Right, right. So in that regard we’ll be more like the NBA D-League, although there are affiliations there too. So we’re really going to be more like unaffiliated minor leagues.

Another hurdle, I imagine, is the venues. Will you guys need to spend money to get access to fields of play or stadiums?

We’re going to avoid being in NFL and MLB cities. We’re going to hit markets that are starving for football. We haven’t selected those cities yet. So as soon as we have money in the bank we’ll be out to make arrangements with cities. Smaller stadiums. We’re not going to have 80,000 people, so we don’t want to play in huge stadiums. We may look at MLS stadiums as well.

You want to raise $5 million at first. That seems small.

Longterm, we want to raise upwards of $500 million. We’ll manage that money in a way that will mitigate the risk of loss for investors, and provide them upside opportunity independent of the success of the league. But what we’re working on right now is we need initial money to cover the legal and marketing costs. So we’re looking to raise our first phase money on that. We’re also ideally looking for more of a partner relationship than an arm’s length investor. Right now, if we can come up with $5 million, that will allow us to do what we need to do next.

But you haven’t been able to get it yet. Does that worry you?

We have carefully scheduled out how much we will need to establish our basic operations and, more important, cover the legal and marketing costs of our larger-scale capital raise. $5 million is the amount we need to accomplish that. We see no need to ask for more than is needed. Our second phase will utilize an entirely different methodology and will target an entirely different source of wealth than the startup partners we are now pursuing. We always expected this $5 million phase would be the hardest. So I am not at all discouraged by the current pace.

Why not try Kickstarter for this?

For a variety of reasons, we don’t think that’s a good approach for us. One, I don’t think it would raise the amount of money we want it to raise. Two, we would end up with a bunch of people that we don’t know having an undefined involvement in the start of the league.

What are you hoping for in terms of a timeline?

Once the money is there, things are going to go very smoothly. The XFL, I think, is a former effort that came the closest to working, but they didn’t give their football people enough time to put a good product on the field. The football wasn’t good, I think that’s what did them in more than anything else. So we want to make sure the coaches and players are fully prepared to compete well. The rest of the stuff will fall in line quickly. The hard part of it is trying to plan this when you don’t have any money. [He laughs.] We’d love to play in 2016. I come to work every day thinking we are going to get our funding and kick off in 2016. That probably won’t happen, but I come in believing it will.

How much will the players get paid?

We’re not going to be paying them a lot of money—just enough to get by. Because our intention is not to provide them a career, but an opportunity to get to the NFL. But we will be providing mentoring and internships and career advice for those who don’t make it. That’s a big missing link. Every football player thinks they’re going to make it to the NFL, and many have no contingency plan when they don’t; it’s shocking for them when it’s over. So we’re going to help them get over that hump.

What if people in the NFL just don’t see the need for this?

The general tenor I get is that it’s needed. A developmental system of some kind is needed. So they’re happy about that. As far as their assessment of success, I don’t really get much feedback on that. I know myself that it took a long time just to scale my own view of how this league should operate. I’ve gotten nothing but encouragement, surprisingly, when I thought they’d all tell me I was crazy.

What would you say to someone who hears all of this and is a total skeptic, thinks it won’t work?

I would say, You are entitled to your opinion, but I am equally convinced that it will work. And you’re basing your opinion on the past, and the past is why we’re confident we will succeed.