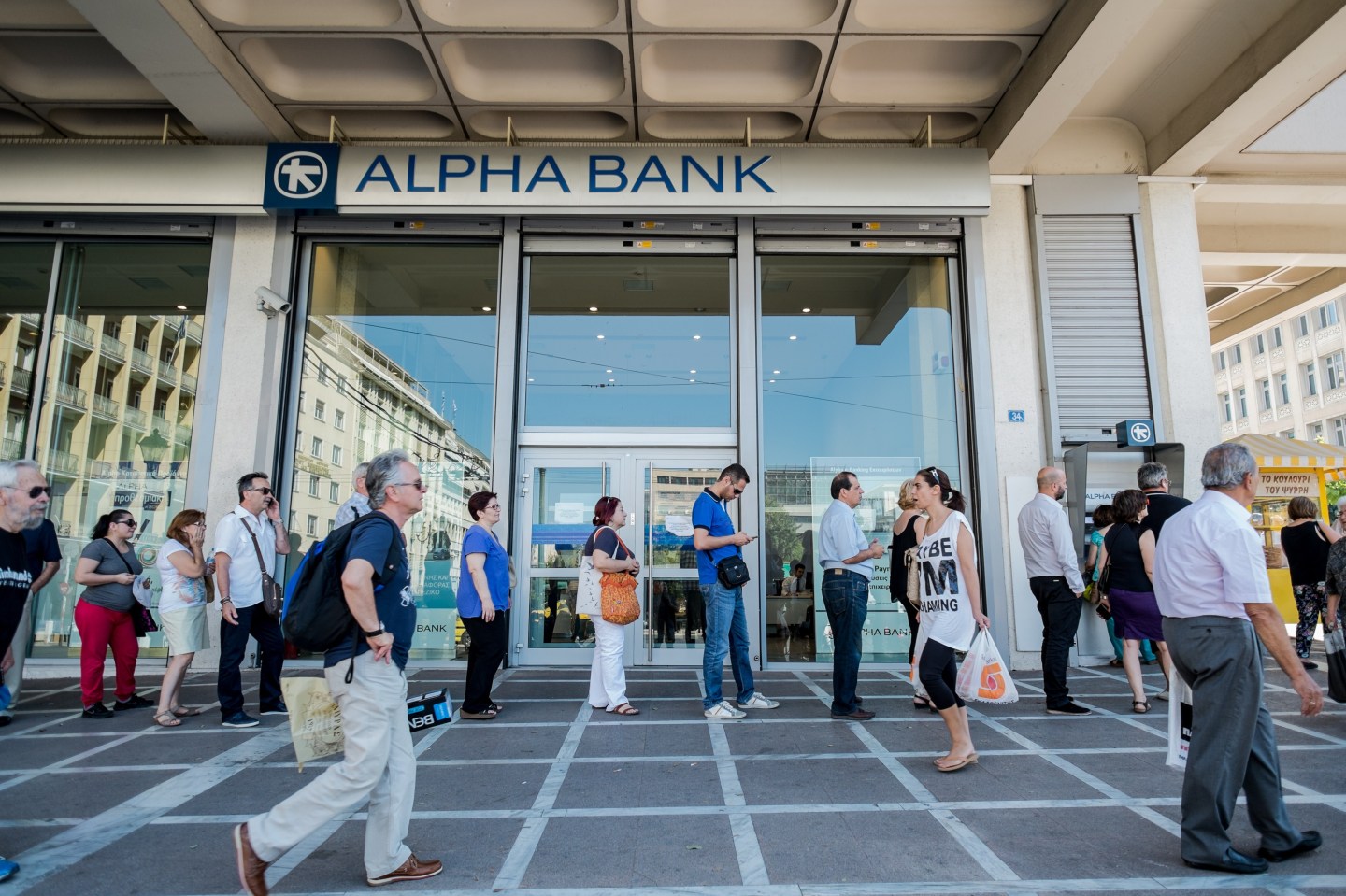 People queue at an ATM to withdraw cash in downtown Athens on July 9, 2015.
Photograph by Andreas Solaro — AFP/Getty Images

The capital hole has emerged chiefly due to the rising number of Greeks unable or unwilling to repay their debt, after a dispute over reforms between the leftist government and international lenders almost saw Greece leave the euro.

As controls on cash withdrawals have squeezed the economy, loans at risk of non-payment have increased by 7 billion euros to 107 billion euros.

That is roughly half of all the credit given by the country’s four big banks, according to the ECB. Almost 57 percent of the loans made by Piraeus Bank, the bank which fared worst, are at risk.

The fact, however, that the declared capital hole is smaller than the 25 billion euros earmarked to help banks in the country’s bailout may encourage investors such as hedge funds to buy shares.

The lenders are currently kept afloat by central-bank cash but there is a rush to get the recapitalisation finished.

If it is not done by the end of the year, new European Union rules mean large depositors such as companies may have to take a hit in their accounts.

Greece’s Finance Minister Tsakalotos said on Saturday he was optimistic that Greece’s banks would successfully recapitalise by the end of the year.

The stress tests looked at how many loans would go unpaid if the country’s economy performs as expected up until 2017 – the so-called ‘baseline’.

It also simulated a ‘stress’ scenario, where Greece dips further than expected. For this test, ECB officials assumed that the economy would shrink by more than 3 percent this year and next before growing modestly in 2017.

In checking the financial strength of the country’s four main banks – National Bank of Greece, Piraeus, Alpha Bank and Eurobank – the ECB determined that even should the economy perform no worse than expected, the banks would still need almost 4.4 billion euros.

In the check, National Bank and Piraeus fared worst. To see a chart of the results, click here: http://link.reuters.com/tuz85w

It is the performance of the banks under stress that determines how much capital is needed. The ‘baseline’ scenario, for instance, expects Greek growth of 2.7 percent in 2017 – far outstripping Germany now.

The ECB defended an earlier test that had given the banks a clean bill of health before the most recent political turmoil.

But Ramon Quintana, a director general in the ECB’s bank supervision arm, cautioned that Greece’s economy needed to stay on track for the banks to hold steady.

“Any deviations from these scenarios means that reality can go beyond what is expected in the exercise,” he told journalists. “This is why it is very important to avoid any deviation from the economic growth expected.”

Much of the focus so far in rehabilitating Greece has focused on the scale of its national debt, which is approaching double its economic output.

In comments to an Italian newspaper published on Saturday, ECB president Mario Draghi said that some debt relief may be required.

But the tests throw the spotlight on personal debt.

Banks have struggled most amid the months-long stand-off between leftist Prime Minister Alexis Tsipras and his country’s international backers – the International Monetary Fund and European Union.

The dispute led to the freezing of central-bank funding for Greece’s banks and forced controls on cash withdrawals. Although this stemmed a further hemorrhaging of savings, it squeezed the economy, making it harder for borrowers to repay loans.

Of an 86-billion-euro bailout of Greece, 25 billion euros is earmarked for banks.

To reach its outcome, however, the ECB counts into the calculation billions of euros of future tax rebates that the Greek government could pay its banks.

Greek bankers hope that private investors will buy shares in the lenders. But Greece’s future and that of its banks remains uncertain, despite the latest checks.

A fall of more than two thirds in the banks’ stock prices this year serves as a reminder of the risks.