Why you should care about Turkey’s election this weekend 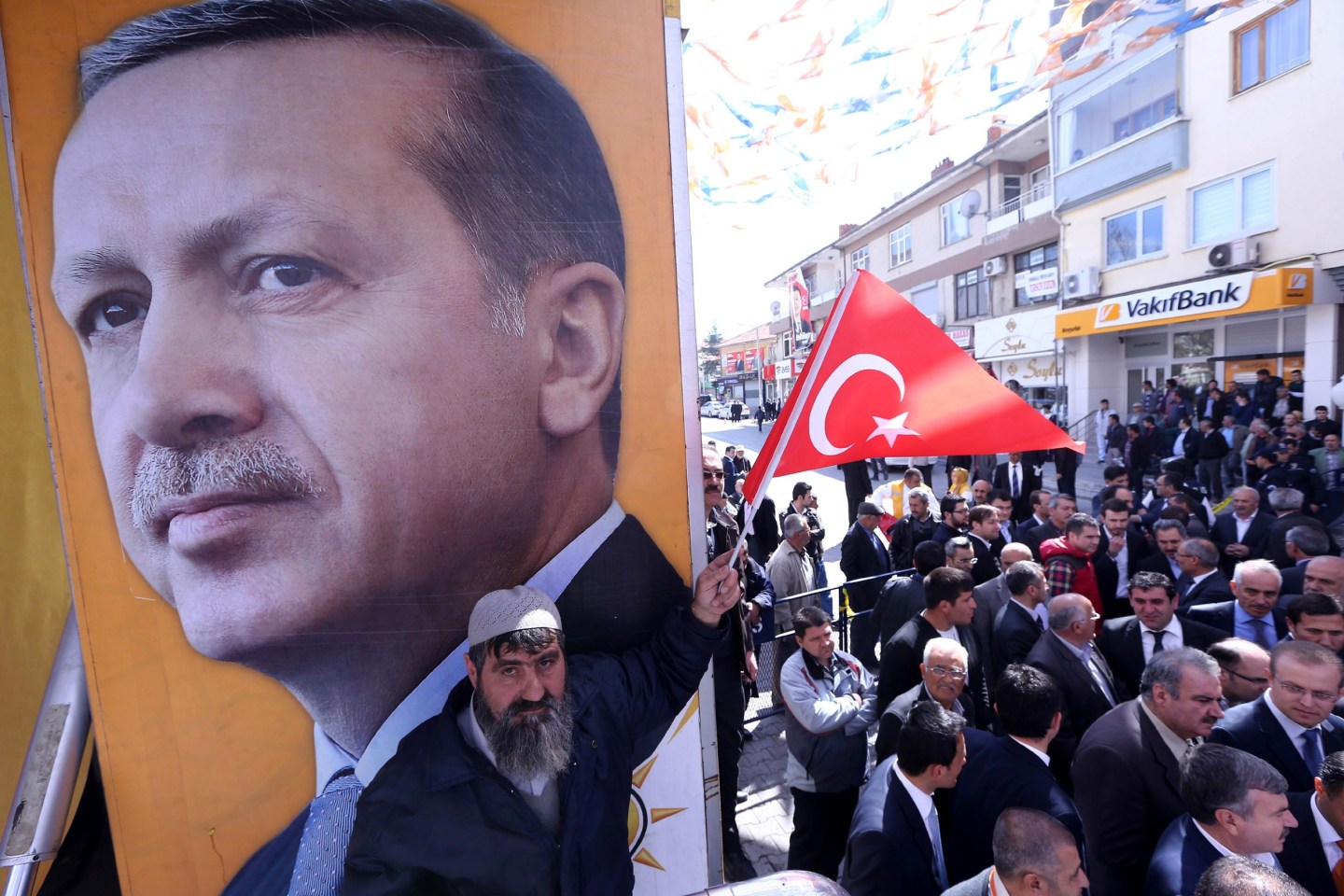 A man waves a Turkish flag in front of a portrait of Turkish Prime Minister Recep Tayyip Erdogan during a campaign meeting of the Justice and Development Party in the Beysehir district of Konya province in central Turkey on March 26, 2014. AFP PHOTO/ADEM ALTAN (Photo credit should read ADEM ALTAN/AFP/Getty Images)
Photograph by Adem Altan — AFP/Getty Images

Turkey’s snap election on Sunday will likely be a pivotal one for financial markets, setting the stage for further uncertainty—and selling—or ushering in a new government that could help quell recent volatility.

But whatever happens, analysts warn, investors shouldn’t expect a panacea for the chronic political worries that have hammered the lira currency and upended Turkey’s position as one of the world’s most promising emerging markets.

“After 13 years of single-party government and internal and external stability, Turkey is in a completely different geopolitical environment,” analysts at Morgan Stanley wrote in a recent note.

“Expecting a total and permanent U-turn in Turkey’s ‘new normal’ after the November 1 elections is not very realistic.”

Turks go to the polls for the second general election of the year, which President Tayyip Erdogan hopes will see the ruling AK Party win back the single-party majority it lost five months ago.

Most opinion polls in recent weeks have suggested the AKP will struggle to achieve this but may take more of the vote than in the June 7 election, when it won 40.9 percent and was left unable to govern alone for the first time since 2002.

However, one survey released on Thursday suggested there had been a late surge in support for the AKP and that it could take as much as 47.2 percent, comfortably enough to secure more than half of the 550-seat parliament.

“Any post-election scenario which increases the scope for a period of political stability will be welcomed by markets,” said Nicholas Spiro of Spiro Sovereign Strategy.

“However, Turkish politics is a mess right now and there’s no market-friendly outcome as far as the election is concerned. It’s more a question of different degrees of unfriendliness.”

Once feted by investors for years of stellar growth and solid demographics, Turkey’s reputation has been badly tarnished by signs of Erdogan’s creeping authoritarianism.

He has railed against high interest rates, inflaming concerns about the lack of independence at the central bank. A recent crackdown on opposition media has also unnerved investors.
[fortune-brightcove videoid=4585725789001]

Increased violence
The AKP, which was founded by Erdogan and now led – at least in name – by Prime Minister Ahmet Davutoglu, was deprived of single-party rule in the June 7 parliamentary election. Davutoglu failed to find a junior coalition partner, pushing the country towards Sunday’s re-run.

Along the way, Ankara stepped up its attacks on the militants of the Kurdistan Workers’ Party (PKK) ending a 2-1/2-year ceasefire. The increased violence in the restive, mainly Kurdish southeast, as well as Islamic State bomb attacks, have also weighed on sentiment.

Some investors, including BGC Partners, have put a coalition government as the most likely outcome, with the AKP seen as forming an alliance with the main opposition Republican People’s Party (CHP).

A grand coalition between the Islamist-rooted AKP and the center-left, secularist CHP is regarded as the most favorable outcome by financial markets, as it could serve as a check on Erdogan’s authoritarian tendencies.

“This so-called grand coalition represents the best way forward for Turkey at this juncture,” said Sinan Ulgen, a visiting scholar at Carnegie Europe, in a report.

“Such a broad-based agreement could ease the country’s current extreme political polarization and reintroduce a dynamic of democratic and economic reform underpinned by a new momentum toward the goal of EU accession.”

Another, although less likely, scenario would be for the AKP to return to single-party rule. This too, would be taken as a positive, at least in the short term, by financial markets.

The least favorable, and perhaps least likely, scenario would see no coalition, forcing the country to yet another re-run.

“The possibility of yet one more election cannot be ruled out, especially if Erdogan remains convinced that a fresh vote could finally enable the AKP to win back a parliamentary majority,” Carnegie Europe’s Ulgen said.

Whatever happens on Nov.1, one thing is certain – Turkey isn’t going to see a drastic turnaround in investor sentiment anytime soon.

“Turkey is divided and the divisions won’t end after the election,” said Gary Greenberg, head of emerging markets at Hermes Investment Management in London, which is underweight Turkish equities.

“The uncertainty is not just whether Turkey will have a government, there is macroeconomic, financial, political and policy uncertainty.”