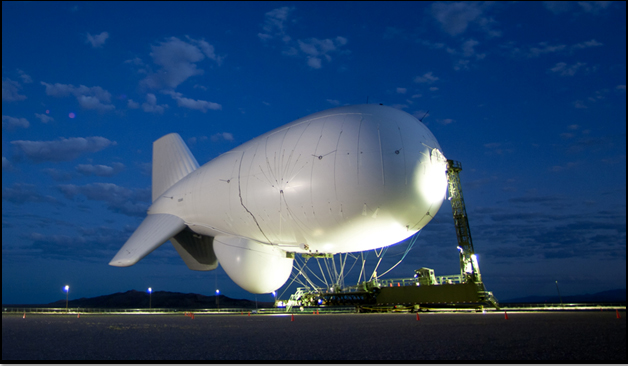 When the U.S. Army lofted a sensor laden, 240-foot blimp into the sky northeast of Baltimore in December, it told Americans that the system was the latest and greatest tool for defending the capital region from airborne threats. On Wednesday, that blimp became the airborne threat by breaking loose from its mooring at the Army’s Aberdeen Proving Ground and taking a 160-mile power-line-severing joyride across northeast Maryland and Pennsylvania.

The rampage proved an apt analogy—and possibly an appropriate death knell—for a runaway program that some Army leaders have unsuccessfully tried to kill for years. The 17-year, $2.7 billion dollar Joint Land Attack Cruise Missile Defense Elevated Netted Sensor System, better known as JLENS, was supposed to provide an around-the-clock eye in the sky over an area the size of Texas. It in intended to track airborne threats like cruise missiles and drones that could threaten the greater Washington, D.C., area.

But plagued by both hardware and software problems, JLENS instead provided patchy surveillance that experienced problems communicating with the Pentagon’s larger air defense systems. A Pentagon report in 2012 rated its reliability as “poor.” A year later the same Pentagon technology evaluators again said the blimp showed “poor system reliability.”

Yet over two decades nearly $3 billion was spent on the program with little to show in terms of operational capability or return on investment.

The Army spent its first $292 million on its super blimp in 1996, awarding a consortium led by defense contractor Raytheon the cash to begin developing systems capable of providing around the clock intelligence, surveillance, and reconnaissance. By November 2005 the Army’s blimp investment topped $1.3 billion as it committed to buy more than two dozen airships (although commonly called blimps, the JLENS is actually an aerostat because it is tethered to the ground— when not rampaging across the countryside).

In theory, the JLENS aircraft work in pairs to provide 360-degree aerial surveillance over an area. Hovering up to 10,000 feet overhead, one aerostat scans the surrounding airspace for 340 miles in every direction. The other then focuses in narrowly on objects designated as threats by its partner, providing the “fire control” data—things like speed and trajectory—that pilots or missile batteries use to target airborne threats.

JLENS ascended alongside several other airship and aerostat programs created by the U.S. military in the late 1990s and 2000s. The U.S. Army’s Long Endurance Multi-Intelligence Vehicle aimed to develop an unmanned, untethered airship that would provide overhead surveillance to ground troops without having to regularly refuel like conventional drones. The U.S. Air Force and Navy had similar programs in the works throughout the 2000s. Each of these programs was eventually cancelled due to underperformance, cost overruns, or both.

In 2010 it appeared the same fate awaited JLENS. According to a Los Angeles Times investigation, Army planners raised doubts about the need for the system. In September of that year, a civilian balloon broke loose from its mooring during a storm and crashed into a nearby $182 million JLENS aerostat, destroying it. The Army had poured more than $2 billion into the program and had yet to produce a working system, and officials decided to pull the plug.

But Raytheon managed to rescue the program by lobbying the Defense Department to keep the blimps alive using Pentagon research and development funds to cover what the Army would not. Those funds paved the way for the “operational exercise” ongoing at Aberdeen Proving Ground—the one the Pentagon’s testing office had thus far found lackluster in its results. The L.A. Times investigation found that during both the Aberdeen exercise and sensor trials conducted in Utah that JLENS has had trouble tracking and identifying flying objects and suffers software glitches that hamstring its ability to communicate with the nation’s air defense networks.

It also found that while JLENS is designed to provide around-the-clock surveillance for 30 days running, it has failed to prove it can do so. The Pentagon report cited indicates that on average the systems stays aloft and functional for less than 24 hours per launch. Fixing all these problems and fully deploying JLENS would cost billions more if the Pentagon proceeds with the program.

Notably, the report also found that the aerostats are susceptible to bad weather that can force them offline—or perhaps send one careening across Pennsylvania with its trailing tether downing power lines along the way. It’s unclear if Wednesday’s episode will finally kill the Army program the Army couldn’t kill (Raytheon declined to comment on the status of the program). But North American Aerospace Defense Command confirms the aerostats will remain grounded until an investigation into the incident is complete.

For more about the aerospace industry, watch this Fortune video: