Why Michael Jordan went to China for Nike 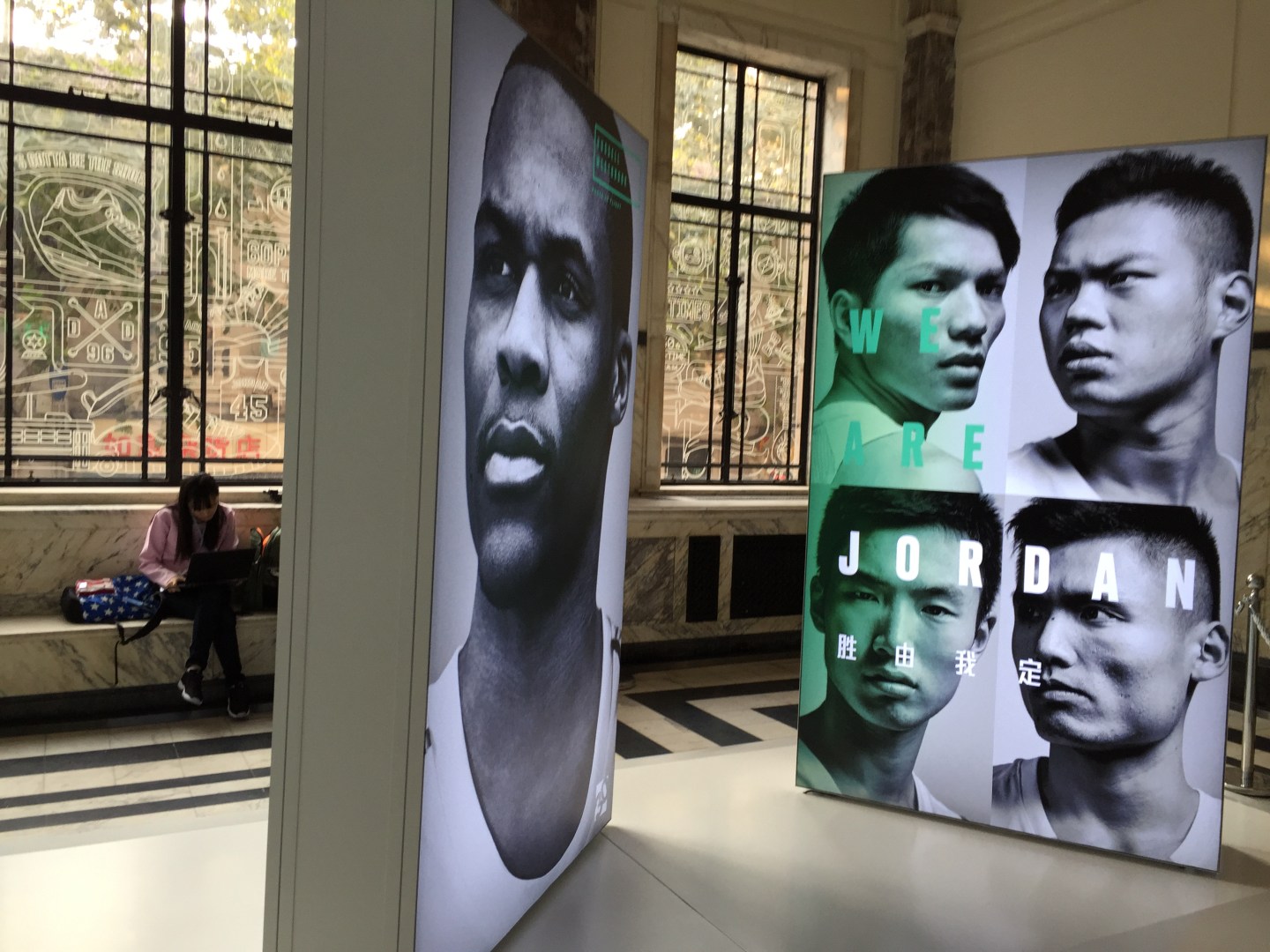 Eric Gao has been waiting around in a milling crowd for hours, hoping to catch a glimpse of the man responsible for his favorite shoes. The 18-year-old student is standing outside a Romanesque building in old Shanghai; inside, Michael Jordan is privately touring a space that has been refashioned into a retrospective celebrating the 30th anniversary of his shoe brand. The exhibit, called House of Flight, comes complete with first edition Air Jordans, an old box of Wheaties, and a Hong Kong artist’s collage of Jordan symbols (the jersey number 23, the phrase “I’m back,” the six championship rings).

Gao can’t get into the exhibit, but he’s desperate to see Jordan, not because the Chicago Bulls legend is his favorite player—that would be LeBron James—but because he’s the one adorning his feet.

Gao is what fashionistas in the U.S. might call a sneaker-head. Jordans in mainland China start at around $100 and quickly shoot past $500 for classic styles, if you can find them. Gao’s got 10 pairs. “I like the first edition, and the second, third, and fourth,” he says, “and the eleventh and twelfth. I love Jordan.” And in a way, consumers like Gao are the reason the House of Flight exists. It’s part of a sustained marketing push by Nike, the company that makes the iconic brand, to make sure it can keep selling the shoes at a premium—by reminding Chinese consumers that the shoes are made for performance and not just for fashion.

A veteran sports industry observer, NPD analyst Matt Powell, once described Air Jordans as “the top-end, conspicuous-consumption brand,” so it was only a matter of time before the shoes tapped into China’s still insatiable demand for luxury goods. On the streets of Shanghai and Beijing, Jordans have morphed into the fashion statements they are in the Bronx or the Beverly Center. “People are wearing Jordans all over the place,” Blake Griffin of the Los Angeles Clippers marveled during his October trip to China for an NBA preseason game.

In China’s mega cities, Jordan high-tops are a favorite among girls in short-skirts, guys wearing tight jeans, couples shopping at the city’s upscale malls, and moneyed mothers pushing strollers. Even though the sneakers first appeared in China in 1996, only recently have they become ubiquitous on streets—more prevalent, in some areas, than they are anywhere in the U.S.

In a neighborhood near Beijing’s old city center, five shops within a couple blocks of each other each have cellophane-wrapped pairs selling for 4,500 yuan ($715). A shopkeeper at one Beijing store that opened two years ago said sales have been brisk, despite prices that run considerably higher than in the U.S. because of tariffs and limited supply. Fake versions abound too, though in a country adept at copying, the only distinguishing detail might be slightly lower prices.

China is not just the world’s largest market for basketball; it’s a place where fashion trends sweep across cities of 20 million-plus people like wildfire. Though Nike doesn’t break out Jordan Brand financials, China recorded the highest footwear growth of any Nike market in the company’s latest fiscal year—up 26%, to $2 billion. In the latest quarter, Nike sales rose 30% in what the company calls “greater China”—including Taiwan, Hong Kong and Macau. The region is quickly becoming a crucial market for the $100-billion-market-cap company as Western Europe and the U.S. cool off. Jordan Brand sales hit about $2.2 billion a year worldwide, Nike said recently, and the company expects them to rise to $4.5 billion by the end of 2020, in big part because Jordans are becoming a bona fide hit on the other side of the world.

The shoes are becoming so popular, in fact, that they pose a potential problem for Nike: They risk turning into a fad. The sneakerhead Gao, for instance, buys most shoes to wear casually, rather than for playing sports. Success with such customers can be a mixed blessing: if street sales of Jordans are too hot, the brand loses it connection to basketball, which gives it credibility in the first place. “We don’t want the brand as a lifestyle brand,” says Jeanne Huang, a Nike spokeswoman in China.

In the athletic-wear world, lifestyle brands tend to flame out, while performance brands are more likely to endure. Fila shoes, for example, spiked in popularity in the ‘90s, but the brand never attached itself to more than a couple professional basketball players in the U.S. and sales quickly sputtered. Adidas, Nike, and perhaps the Jordan Brand most of all owe their decades of popularity to marketing themselves as brands for athletes. “To have longevity as a basketball brand it has to be performance first,” says David Weiner, a Deutsche Bank analyst following Nike.

Nike’s problem is an example of how difficult it can be for even successful brands to control their image in China. On the one hand, no one will complain about hot sales growth; on the other hand, overheated sales in megacities create the danger of a future letdown. That’s where Nike’s new Jordan-centric marketing effort fits in: It’s part of Nike’s vigilance against Jordans becoming the trend du jour.

Compared with other well-known Western brands, Nike doesn’t have a long history in China. (Coca-Cola, for example, was around before the Communists took over in 1949.) Nike’s China sales reached the $1 billion threshold in 2008, but more recently, the country was a blemish on the company’s global record.

In 2013, Nike suffered from massive inventory oversupply in the country because of rosy sales expectations. “Their retail partners kept buying more product,” says Susan Anderson, an analyst at FBR Capital Markets, who notes that other brands suffered similar problems. “All of a sudden they hit a wall.” As stale styles lingered on shelves, they hurt Nike’s image as a high-quality foreign product with high prices to lust after. Sales fell 2.5% from 2012 to 2013, dropping for three consecutive quarters during one stretch in what Nike had hoped would be its hottest growth market.

Nike eventually turned things around following a strategy that had worked in the U.S.: stocking better-tailored apparel with higher quality fabrics that met the elusive “premium” designation, and justified higher prices that could be raised 4% to 5% a year. The Jordan Brand grew quickly in China during that resurgence. It starting discussing sponsoring top basketball players in China, just as small shoe-centric stores started popping up around big cities. But while some Chinese consumers bought the latest Jordan shoes to play basketball in, the majority of sales were from people buying to wear on the street, says Eric Tian, a former marketing manager for the Jordan Brand in China who’s now a partner for a social photo app company. He says the split in Jordan shoe sales in China is about 65% lifestyle to 35% performance. (Nike’s spokeswoman declined to confirm that figure, but did not contest it.)

Whenever Tian would talk with the brand’s ideal target customers, usually basketball-obsessed male twenty-somethings who played on professional or college teams, they could recall Michael Jordan career highlights. His shot against the Utah Jazz to win the 1998 NBA Finals, or his wins against the Knicks. But most of China’s consumers are too young to remember those moments, and they don’t have SportsCenter replaying them every few weeks. “They never really watched Jordan games,” Tian says. So Nike focused its marketing strategy on telling Chinese consumers that the shoes were technical wonders, designed first and foremost for playing basketball.

Still, the brand is susceptible to being seen as a celebrity’s fashion label. That’s a big reason why Nike released its first-ever Jordan-centric commercial for the Chinese audience, on television and across Chinese social media, earlier this month–a 120-second ode to the crucible of determination, narrated by Jordan himself. It’s also why Jordan himself traveled to China in October for the first time since 2004, stopping in Shenzhen and Shanghai for two NBA preseason games and lots of self-promotion.

Jordan generated head-of-state type coverage in China’s state-run press. Xinhua, the top state news service, boasted an exclusive interview and ran multiple follow-up stories. Nike saw the trip as a way to anchor the shoes more closely to one G.O.A.T. (greatest of all time) athlete, in Jordan, and two very good ones in L.A. Clippers Chris Paul and Blake Griffin, both of whom endorse the brand. Nike is “trying to keep the balance of retro and performance,” says spokeswoman Huang. “His coming over here, along with brand athletes, reinforces the positioning of performance.” (Nike declined to make executives available for interviews for this story.)

On his trip, the Chinese got a taste of the real Jordan, intense and sometimes irascible. At an elaborately staged session in Shanghai in mid-October that was live-streamed on Chinese Internet, former broadcaster Ahmad Rashad and Nike’s top Jordan designer, Tinker Hatfield, joked about the time Rashad unveiled the newest Jordan sneaker in the 1990s on the air on NBC, three or four months before it was scheduled to debut. “Of course Michael was wearing it on the court after you,” Hatfield told Rashad. Jordan walked onto the stage immediately afterward and, whether he was in on the joke or not, it didn’t seem to sit well with him. “You were the first one to wear ‘em, huh?” he muttered.

The tension was lost on the assembled crowd of 80 Chinese journalists and photographers, almost all of whom were draped in Jordan shoes, shirts, and jackets as they listened to a simultaneous translation on-stage. The conversation changed subjects, to the new Chinese commercial created by Wieden + Kennedy, which premiered four days earlier exclusively for the Chinese market. The ad itself attests to the new importance of the Chinese market, where blockbuster commercials now originate and air. “Hopefully we’ll be able to see it back in the States,” Jordan said wistfully. “It’s a great commercial.”

One thing that’s undeniable about China is its passionate love for basketball. Mao Zedong loved the sport so much that it was the only Western sport not banned during the tumultuous Cultural Revolution. Today, Wall Street analysts predict that basketball will grow rapidly in the country as China’s ruling State Council focuses on building recreational sports. There could be 300 million players in China by 2025, says Weiner, the Deutsche Bank analyst. In the U.S., he estimates half of Jordan sales are to customers buying shoes for the court. The share may never get that high in China, but the new focus on performance lowers the odds of a fashion fad downfall for Nike, Weiner says: “That’s where you get authority. That’s what people pay for.”

In the meantime, the company is dealing with other headaches that come with operating in China. A Chinese competitor, Qiaodan Sports, trademarked Jordan’s Chinese name, Qiaodan, in 2000 and has since produced shoes strikingly similar to Air Jordans under Chinese trademark law that rewards first applicants instead of the first users of a trademark. Michael Jordan lost his personal suit against the manufacturer in Chinese court this year, but said he has plans to appeal to China’s supreme court. (Qiaodan Sports’ defense is that it uses a Chinese translation of a common foreign family name.)

Cellophane-wrapped Jordan shoes on sale in Beijing. The most popular model, the patent-leather 11th edition, sells for $700.Scott Cendrowski

Back at the entrance to House of Flight, Gao is giving up. It’s late in the evening; Jordan is still inside and won’t be coming out for an autograph line.

“I feel upset because I could not see Jordan clearly. The security is too strict,” he says. “I spent all day to find Jordan.”

Gao sends me a text the next day. The Michael Jordan-majority-owned Charlotte Hornets are playing a game in Shanghai. “Hey I feel excited tonight,” he wrote, “because I spent 2200 rmb to see nba China game.”

Spending $350 for a ticket to watch preseason basketball might be about as close as a sneakerhead gets to paying for performance.

For more Fortune coverage of Nike, see this video: