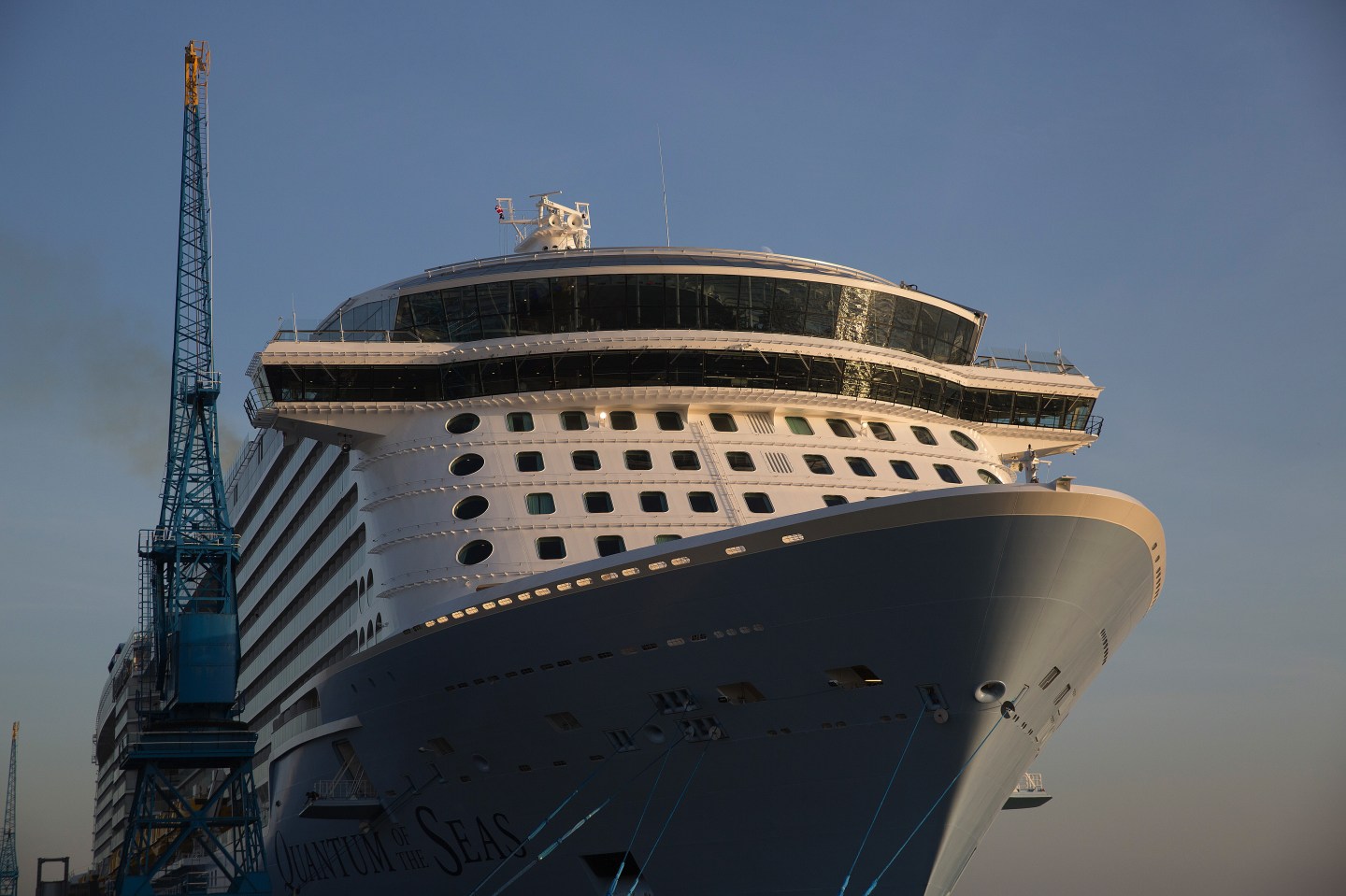 A ship to shore crane stands alongside the Quantum of the Seas cruise ship, operated by Royal Caribbean Cruises Ltd., as it sits moored to a berth at Southampton Docks in Southampton, U.K., on Friday, Oct. 31, 2014. Royal Caribbean's newest ship Quantum of the Seas is one-third smaller than its Oasis-class ships, but is fitted out with onboard activities such as bumper-cars and robotic bar tenders. Photographer: Simon Dawson/Bloomberg via Getty Images
Photograph by Simon Dawson — Bloomberg via Getty Images

Cruise ships have long lagged the rest of the travel industry when it comes to technology. Wi-Fi connections have traditionally been painfully slow, and the only noteworthy technology investment cruise lines made usually involved systems designed to make it easier to pay for optional items like spa treatments, dinners and trips to the onboard casino.

That is officially changing.

Royal Caribbean Cruises just introduced a fleet of what it calls “smartships” that offer high-tech touches like cocktail-mixing robots, RFID powered wristbands, and mobile apps. And Carnival announced that it’s creating the cruise industry’s largest Wi-Fi network, which will offer the broadest possible high-speed global coverage across dozens of ships. Luxury line Regent Seven Seas Cruises also said on its official blog that it will offer free unlimited Wi-Fi access for every passenger starting in late 2016.

These upgrades promise to change the sailing experience, opening cruise vacations to passengers like always-connected Millennials and conference attendees, who would have never considered a cruise before. But as always, there’s a catch: Someone has to pay for the technology, and that someone is probably you.

The centerpiece of these technology upgrades is faster Wi-Fi. O3b Networks, a company that provides ship-to-shore communication systems, started working with Royal Caribbean back in 2011 to upgrade its internet connections. It developed a new type of high-throughput satellite which quadrupled connection speeds, according to Steve Collar, O3b’s CEO.

“It allows passengers to play interactive Microsoft Xbox online games with players around the world, stream Netflix HD videos to their devices, share their vacation experience via social media and even chat online,” he adds. “This is an unprecedented experience on a cruise ship.”

Michael Bayley, Royal Caribbean’s CEO, said passengers want a connected ship. “Access to reliable and fast internet access is now a requirement by our guests,” he says. “We have worked very hard to find ways to simplify how we provide our unique high speed internet service.”

Royal Caribbean’s Wi-Fi packages, called Voom, will cost $15 per day per device with a second device half off, and offer download speed that was available for the entire fleet not long ago, according to the company.

Demand for wireless connection is high, agrees Reza Rasoulian, a vice president for connectivity for Carnival. “Historically for the cruise and maritime industry, connectivity while sailing in the middle of the ocean has been a challenge,” he admits. But he says Carnival has pulled it off. Its new wireless network is deployed on 34 of its 100 ships, and represents a huge investment in satellites, networks and optimization technologies.

Carnival’s system, called WiFi@Sea, allows guests to share photos and updates, and even call home from a computer. “Previously, a simple connection was a challenge,” says Rasoulian.

It’s difficult to quantify the upgrades with any precision. Neither Royal Caribbean nor Carnival would disclose their exact connection speeds pre- or post-upgrade. A Carnival spokeswoman would only say that speeds “are similar” to those found in a public Wi-Fi setting. (Those can range from 1 to more than 4 Mbps.) Royal Caribbean claims its Wi-Fi service “exceeds” 500 Mbps per ship. The cruise lines declined to discuss the costs of the new, better-connected ships.

Just the beginning of a tech renaissance

“Customer experience across all segments of the travel industry is being transformed by technology,” says Umar Riaz, managing director of North American for Accenture Travel. Customers want better Wi-Fi, seamless booking and check-in, social media integration, and mobile device enablement, so the cruise industry is meeting that demand.

Better Wi-Fi is just the beginning, says Chris Ruff, the CEO of UIEvolution, which provides software solutions to Enterprise companies in the cruise, automotive, and hotel industries. The entire industry is one on the cusp of a digital revolution.

“Technology like faster Wi-Fi, improved in-cabin entertainment, and other tools like digital signage and wayfinding not only improves the experience for passengers, but provides opportunities for the brand to collect valuable guest intelligence that can be used to further enhance and personalize passengers’ experiences,” he says.

Steve Griswold, an Atlanta-based travel agent who just cruised on the retrofitted Oasis of the Seas, is a convert to “smart” ships.

“We used to lock our cell phones in the safe and then find an internet cafe at the cruise ports to catch up every few days on work emails,” he says. “Now all that has changed. Wi-Fi is everywhere.It’s a blessing, but also no longer are you device-less for a week, which I have to admit was kind of nice.”

Griswold says he paid $15 per device per day for unlimited Internet access, and, he adds, “it just plain works.”

How much will all of this cost?

Certainly, cruise lines hope to cover the expense of the new technology with higher usage rates. Carnival, which is shifting from a pay-by-minute model to an “unlimited” model for wireless connections, claims the new system will cost passengers less. On Royal Caribbean’s Majesty of the Seas unlimited internet will be included in the price of the cruise, starting next May — something Bayley, Royal Caribbean’s CEO, calls “previously unthinkable.”

“We’ve seen satisfaction rates jump by 50 percent on guest surveys, which was a major catalyst for us to continue to expand this solution across our brands,” notes Carnival’s Rasoulian.

It also seems likely that some cruise lines will raise their prices or cruise fares — or both — in order to cover the substantial expense of these shipboard upgrades. And while the ships of the past may have been “dumb,” at least in terms of technology, they were also often cheaper.

All of the upgrades in tech could mean that cruising will appeal to a whole new set of passengers, beyond the traditional cruise-interest demographic, sometimes derisively (but not entirely inaccurately) referred to as the newlywed, overfed and nearly dead.

“We anticipate more conference, training and incentive meeting sales opportunities across the board,” says Bernadette Stark, the vice president of conference, events, and training for Vacation.com. “In many cases, holding these events onboard a cruise ship can help minimize costs over a land-based event.”