Could a tea bag make beer taste better? We tried it 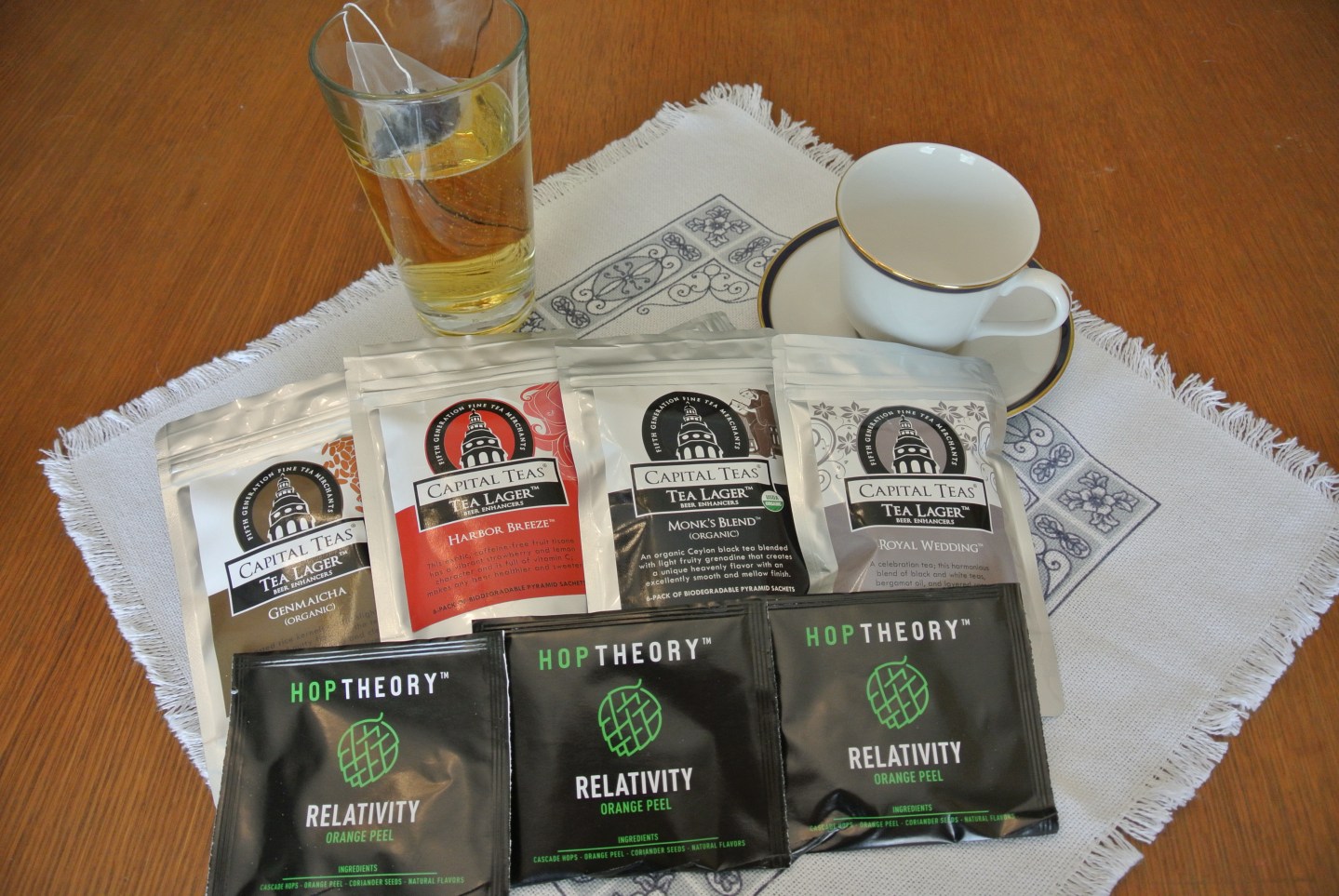 Not too long ago, about the only thing you’d use to supplement your beer was a wedge of lime. But times are changing fast.

Craft beer is tasty, but it’s significantly more expensive than macro beers like Budweiser or Miller Lite. And that got some people thinking: What if there were a way to infuse some of the characteristics of craft beers into their cheaper cousins? The trick to doing so, it turns out, is tea bags.

A number of companies, from Washington, D.C.’s Capital Teas to startup Hop Theory are using sachets to let people customize the flavor of their beers – adding flavors ranging from extra hops to vanilla.

Right now, there’s just one way to customize your beer with Hop Theory – a blend called Relativity which includes hopes, orange peel and coriander. Other flavors including pumpkin and Double IPA are on the way, says Gattuso.

Capital Teas’ selection is a bit broader, with 10 flavors to choose from. Rather than adding hops or malt to the beer, though, they use specially chosen tea blends that adjust the flavor profiles.

The experience with both is … well, an unusual one. There are some universal truths to these, though, that are useful to know before investing in them. First: Beware the carbonation effect. Putting these bags into your beer will often cause a chemical reaction that impacts the beer’s carbonation levels. In some cases (see below), it caused a normally fizzy beer to go flat. And if you’re hoping to turn a Pabst into a Pliny, it’s just not gonna happen.

Everyone’s taste buds are different, so my findings with the enhancers may be different than yours. But here were my impressions with a wide sampling of products from both companies. The short version: You’re probably still better off just paying a bit more and getting a well-made craft beer, but it’s always fun to experiment.

Since there’s only one flavor available from the company, I decided to try it in a variety of mass market beers to see if there was a wide variety of tastes. For each, I poured the beer into a glass, then put in the sachet and let it rest for 10 minutes, to ensure the flavors were infused into the beer.

Fosters – Relativity added a bit of hoppiness to this lager, but not a tremendous amount. There were light hints of orange as well. All in all, it didn’t make a huge difference in the taste of the beer, but it was noticeable. Was it an improvement? Not really.

Corona – You certainly pick up an extra hoppiness on the nose by adding Relativity to this one, but, again, that distinctive taste is lacking when you take a sip. There is a bitterness to the finish, but without the citrusy/piney punch of flavor, it’s a bit disappointing.

Coors Light – If nothing else, adding the Relativity sachet to this beer made it a much darker beer to look at it. It went from a nearly transparent yellow to the clarity of a lighter bodied session IPA, so I had high hopes. The orange was really dominant in this sample – and the flavor profile of the beer was changed perhaps more than any beer that I tested. Unfortunately, it almost completely drained the carbonation, resulting in a flat beer – which is never a good thing.

Stella – Put simply: Relativity did not work with Stella. The natural hops of the lager were muted – and the balance of the beer was completely thrown off. It wasn’t just the lack of carbonation that was distressing (and make no mistake, there was nothing bubbly about the beer), it was the fact that it tasted and smelled like someone had tossed a used Lipton tea bag into the pint glass that threw me off.

While these teas can be used in any beer – macro or micro – Capital Teas sends along a card to buyers suggesting certain brands/styles with each. I followed those suggestions as best as I could in hopes of getting the optimal experience. As with Hop Theory, the sachets were left in the beer for 10 minutes before tasting to ensure the flavors had an adequate opportunity to mingle.

Cream Earl Grey Black (with Stella) – This one lived up to its billing, adding a very creamy complexion to the beer while not obliterating the carbonation. It also infused the Stella with loads of vanilla, which blended quite well with the malt backbone of the beer. All in all, it’s a nice addition – though it’s not something that you’d use every time you cracked one of these open.

Genmaicha (with Corona) – This completely changed the nose of the beer, giving it a very nutty quality. The taste was similar to a brown ale, in some ways, mellowing out the Corona’s natural acidity. The overriding taste I walked away with, though, was olive oil (the good kind you dip bread in – not the cheap kind).

Royal Wedding (with Coors Light) – Not much of a change with this additive. It added a little sharpness and tang to the beer, along with some slight floral notes, but basically it still tasted like a light beer.

Monk’s Blend (with Coors Light) – Like Genmaicha, this completely changed the nose, in this case giving it a very fruit forward scent. That followed through to the beer, which had hints of tropical fruits, which seemingly came from the grenadine in the tea blend. It wasn’t overly sweet, though – and proved to be a tasty addition, greatly improving the beer.

Harbor Breeze (with Fosters) – You get strawberry on the nose as you go in for a sip and that’s evident in the beer as well – but just barely. Despite the recommendation, this seems like an additive that would work better in a lighter beer, perhaps adding a shandy element to it. As it was, it didn’t make a tremendous impact on Fosters.

Harbor Breeze (with Woodchuck Cider) – Despite the lack of real success with the Fosters, there was something about Harbor Breeze that seemed promising, so I tried Capital Teas’ other suggestion – a hard cider. And I’m really glad I did. It was a noticeable improvement, adding layers to the drink as the strawberry intertwined with the apple. It also added a smoothness to the cider that made it even more enjoyable to drink.