The fight for a Pacific trade deal isn’t over…yet 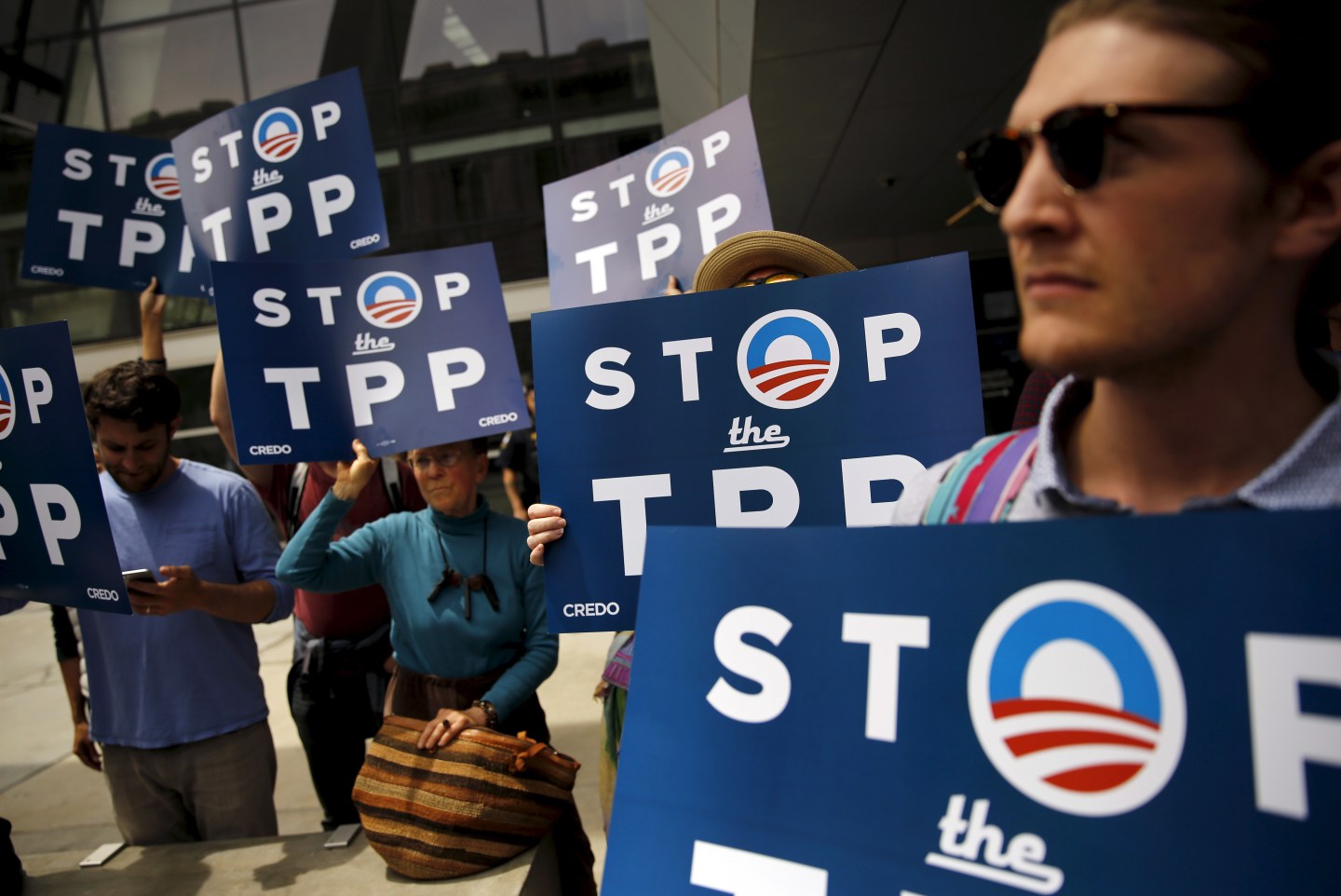 The finalization of the mammoth Trans-Pacific Partnership (TPP) after marathon talks in Atlanta is a landmark event in global trade relations and should bring phenomenal economic benefits to its 12 trading partner nations, including the U.S., Japan, Canada, New Zealand and Australia, as well as numerous developing and emerging states on the Pacific Rim.

Covering 40% of global GDP, the TPP is the largest trade deal since the World Trade Organization (WTO) was created in 1995. It represents the most important of the new generation of mega-regional economic integration agreements that have emerged as the counterpoint to the WTO’s faltering push for greater trade liberalization in recent years.

As a free trade agreement, the TPP will eliminate barriers to trade in goods and services among its signatory states. This means scrapping not only the obvious barriers like tariffs, but also sneaky regulatory ones in the form of uneven health and safety standards. As an economic integration agreement, the TPP also includes stronger protections for intellectual property, rules on open government procurement and, perhaps most crucially, safeguards for foreign investors.

The TPP is thought to be worth hundreds of billions of dollars in goods and services for its signatory states each year, dwarfing the achievements of all other regional trade agreements including the Transatlantic Trade and Investment Partnership, or TTIP (between the E.U. and U.S.), and Comprehensive Economic and Trade Agreement (between the E.U. and Canada).

Matters of controversy
Among the agreement’s most controversial features is its investor-state dispute settlement (ISDS) provision. ISDS allows multinational firms to bring legal claims directly against host states for things like expropriation, where the government takes an investor’s property, as well as other forms of unlawful discrimination. This system, which has existed for decades, is still hotly contested because it is perceived as an illegitimate way to sidestep local courts by using privately appointed international and confidential tribunals, which some view as an affront to sovereignty.

The debate over ISDS continues to rage in connection with the TTIP with a number of radical proposals being tabled recently. These include the establishment of a specialized court composed of appointed judges and a right of appeal.

While neither of these features will apply to ISDS under the TPP, the TPP does include a remarkable carve-out for the tobacco industry, instigated in response to the ISDS claim brought by Philip Morris against Australia. Tobacco companies will be precluded from accessing the treaty’s investor-state dispute settlement mechanism, being relegated instead to domestic courts when bringing a grievance against a host state – in what could be seen as a victory for the anti-tobacco lobby..

Others contend that many of the obligations contained in the TPP relating to regulatory transparency and standardization, while advantageous for developed states such as the U.S. and Canada, will necessitate costly reforms that could be harmful to developing countries such as Vietnam and Malaysia.

Achievements
During its negotiations, one of the most widely praised features of the TPP has been its provisions on labor rights (minimum wage and the right to unionize) and environmental protection (preventing over-fishing and controlling pollution). These truly progressive features are subject to enforceable sanctions that may become benchmark legal obligations in future trade agreements.

The environmental features of the TPP are expected to combat trade in endangered species, a fantastic achievement for a treaty focused on economic benefits. Unfortunately, anticipated obligations to prevent currency manipulation, which had been extensively discussed, failed to materialize, leaving much of the work to control this harmful strategy up to the increasingly paralytic International Monetary Fund.

Not over yet
It is important to recognize that the TPP remains to be ratified by each of the signatory states, and this is by no means a fait accompli. President Barack Obama must still push the agreement through Congress, where Democrats have voiced much opposition to the pact in the past. He is, however, a long-standing proponent of the TPP and has been empowered by the recently granted fast track authority for trade pact approval.

In Canada, where an election is looming, one leading challenger has vowed that the TPP will never be ratified if he becomes prime minister. This is a distinct possibility, given that the three main candidates are in a dead heat.

Meanwhile, top Republican presidential candidate Donald Trump has promised that he would renege on the deal if he gets to the Oval Office. This stance would be popular among his grassroots manufacturing base, many of whom feel that free trade brought about by agreements like NAFTA and the WTO sold out their futures in favor of multinationals with factories overseas. And, given that this view is largely echoed by the leading Democratic candidate, Hillary Clinton, the future of the TPP in the U.S., as in Canada, is uncertain.

While the TPP may present challenges for some sectors, including those that had enjoyed protectionist policies in the past (like Canada’s dairy industry and the U.S. auto sector), on balance it should be viewed as a major success in international trade negotiations that will bring many economic benefits to all parties. It is unlikely that any sensible politician will resist it in the longer term.

David Collins is a professor of international economic law at the City University London. This article originally appeared on The Conversation.