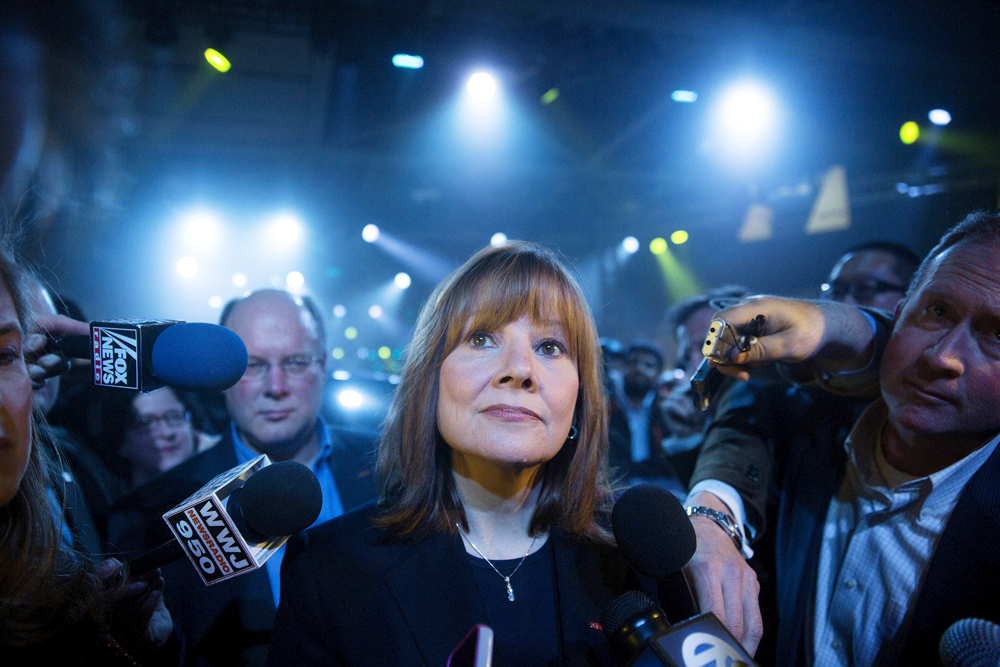 Influence, name recognition, authority—Fortune’s 2015 Most Powerful Women have all three. But in the social media age, we were curious to see how these women are using that clout to wield their power online. So, we tallied up the Twitter followers of each of our Most Powerful Women—and took a look at their personal tweeting styles. When we did the same last year, Marissa Mayer was the Twitter powerhouse to beat, with more than twice as many followers as her closest competition. This year, though, a new social media superstar knocked the Yahoo CEO out of the top spot.

So, who moved up, who moved down and who completely fell off the list this year? Read on to learn more about the social prowess of ten of the most powerful women in business.

What the press says I'm doing: Buying a Bev Hills mansion, getting married in an English castle What I'm doing: Playing a show in St. Louis

Meredith is allergic to joy. pic.twitter.com/FIaVmUVCid

When it comes to social media mastery, it's hard to beat our new No. 1, Taylor Swift. While the pop star brings up the rear on this year’s MPW list, she leads the pack when it comes to Twitter. Swift tweets constantly, uses a conversational tone and shares goofy behind-the-scenes videos—all of which help endear her to her massive 65-million-follower fan base. No bad blood here.

Excited to announce that @zackbogue and I are expecting identical twin girls!! http://t.co/N25wQl4hmv

While she fell one spot this year, Yahoo CEO Marissa Mayer deserves praise. Mayer primarily uses her account to promote Yahoo’s new initiatives, but she doesn't resort to bland corporate speak: her tweets give followers a good sense of her personality. She cheers on the Women’s U.S. soccer team, welcomes new hires—and even used the social media platform to announce that she's pregnant with twin girls.

Excited and honored to lead HP. I'm a true believer in the future of this Silicon Valley icon.

HP CEO Meg Whitman must be busy overseeing her company's coming split—because you most certainly do not find her posting funny selfies on Twitter. In fact, the last time she tweeted was in 2011, when she was named CEO of HP. No wonder she's lost a few followers since last year, when she came in at No. 2 on our Twitter list.

what is a Frosty and why is it so delicious?

Sheryl Sandberg has a significant following—despite having tweeted just 17 times (her last message was sent in 2013). Allow me to take a wild guess and say that's because she’s the COO of Facebook—one of Twitter's biggest competitors. So, if you want more Sandberg commentary, you might want to check out her Facebook page, where she has about 1.7 million followers.

Was so fun to be with the team this morning in London at the start of another exciting launch. pic.twitter.com/x38AerHkFh

Here’s what you can expect from Angela Ahrendts’ Twitter account: selfies, photos of selfies being taken and group photos (groupies?) of happy Apple employees. What not to expect: tweets that reveal much about Ahrendts' life or personality. Still, the Apple fanatics in her 100K+ follower base don't seem to mind.

Sound as sculpture: This startup uses 3D #tech to turn songs into physical pieces of art http://t.co/LA4i4bLUbV via @WIRED

We see you, Beth Comstock. Comstock made the MPW list for the first time this year, but is already proving herself one of most socially savvy honorees. At GE, she's charged with leading business innovation across the company. That's evident in her Twitter feed, where Comstock often shares articles about 3-D printers, drones and mind-reading technology.

If you follow YouTube's Susan Wojcicki on Twitter, get ready to click on some external links (most of which send you to—surprise!—YouTube pages and videos). While she's tweeted just 297 times, Wojcicki is pretty consistent. And it's worth noting that she gives social media love to other MPW honorees, including reigning social media queen Taylor Swift.

.@GM has a diverse array of talented engineers around the world and I'm honored to lead them. #ILookLikeAnEngineer pic.twitter.com/sDSBiiJYtd

Despite her relatively small following, Mary Barra is this year's real Twitter MVP. The CEO has been one of the few Most Powerful Women who's jumped right into trending Twitter conversations. First, she took part in the #ILookLikeAnEngineer tweetstorm. More recently, she got involved in the #SmartGirlsAsk movement during the Emmys, tweeting that STEM education is vital. Watch out, T-Swift—Mary Barra’s coming for you.

You have to give Rometty, a Twitter member since 2011, some credit: There aren't many people who could rack up nearly 15,000 followers without ever sending a single tweet. That's right—not a one.

Though she has only tweeted 25 times, Keane appears to be reviving her feed, taking to Twitter to announce her place on the 2015 MPW list. And she's not afraid to use social media to let us know where her loyalties lie: According to her Twitter bio, she’s an avid Yankees fan.