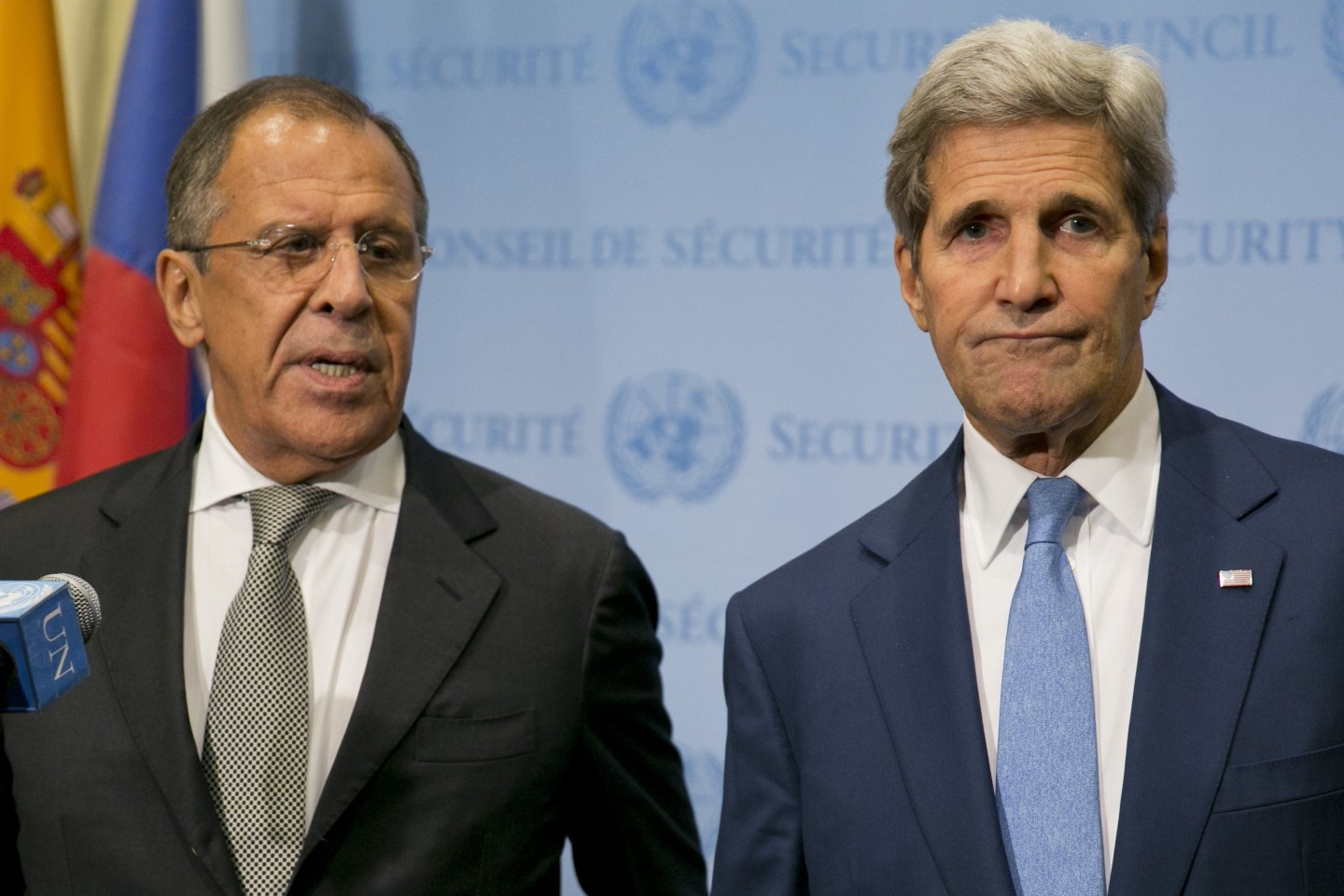 United States Secretary of State John Kerry (R) and Russia Foreign Minister Sergey Lavrov speak to the media after a meeting concerning Syria at the United Nations headquarters in New York on September 30, 2015. Russia's air strikes in Syria targeted opposition forces and not Islamic State jihadists, a US defense official said, contradicting Russian claims. At the United Nations in New York, Secretary of State John Kerry made clear that Washington would have "grave concerns" should Moscow opt to strike targets in areas where IS fighters and Al-Qaeda-linked groups are not operating. AFP PHOTO/Dominick Reuter (Photo credit should read DOMINICK REUTER/AFP/Getty Images)
Photograph by Dominick Reuter — AFP/Getty Images

Lavrov highlighted the need to “establish channels of communications to avoid any unintended incidents.” Kerry agreed, saying the talks would happen “as soon as possible, perhaps even as soon as [Thursday].” The two diplomats stood side-by-side as they briefed the press on Wednesday, reports Reuters.

Earlier in the day, Russia launched airstrikes in Syria just hours after its parliament approved deploying troops to the war-torn nation. Russia claims it is engaging in anti-terrorism missions, but Washington has expressed concern that Moscow might be targeting groups other than the Islamic State of Iraq and Greater Syria (also known as ISIS or ISIL).

“We would have grave concerns should Russia strike areas where ISIL and al-Qaida-affiliated targets are not operating,” Kerry said at a U.N. meeting on Wednesday. “Strikes of that kind would question Russia’s real intentions fighting ISIL or protecting the Assad regime,” he added, referring to Syrian President Bashar al-Assad.

Though unconfirmed, Washington’s fears may have already been realized.

Answering a question about the recent Russian airstrikes at a Pentagonpress briefing on Wednesday, U.S. Secretary of Defense Ash Carter said “it does appear that they were in areas where there probably was, were not ISIL forces.”

Like Kerry, Carter also expressed his willingness to engage in military talks with Russia. He told his team to “proceed with exactly such a meeting as soon as possible.”

At this point, there has been little coordination between Russia and U.S.-led forces. Moscow informed Washington one hour before its most recent airstrikes. “This is not the kind of behavior that we should expect professionally from the Russian military,” Carter said.