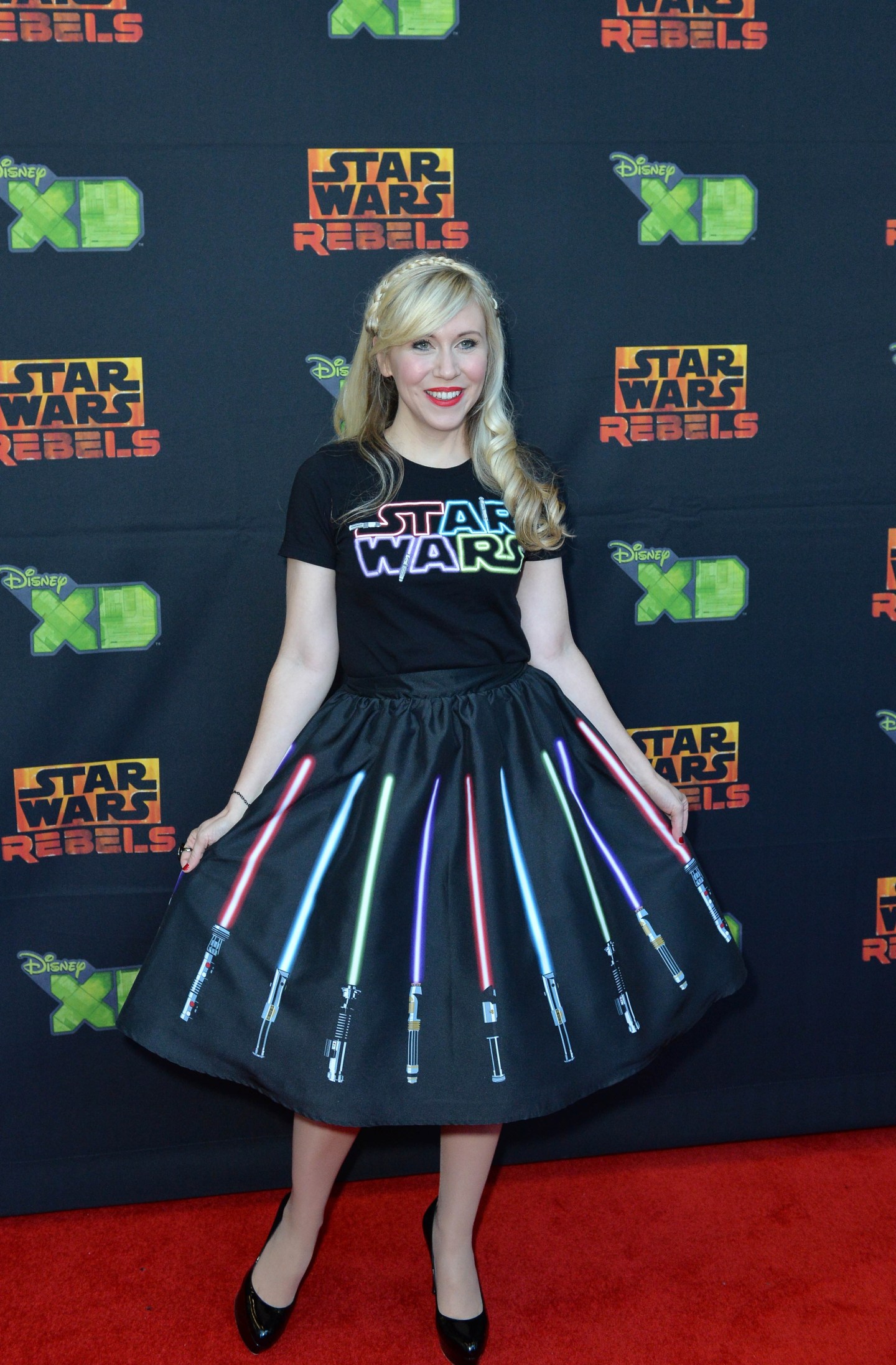 When Kathleen Kennedy, president of Lucasfilm, took the stage at last spring’s Star Wars Celebration, she was dressed in her usual attire: dark pants and a smart, fitted jacket. The t-shirt she wore underneath, though, was more original—a rainbow-colored version of the bulbous Star Wars logo, splashed across a black background.

By the end of the day, the t-shirt, made by a small apparel company called HER Universe, had sold out. Months later, it remains one of the sci-fi fan girl fashion line’s best-selling products.

“Kathy Kennedy is the Kate Middleton of Star Wars,” Ashley Eckstein, founder of HER Universe, says of the Lucasfilm head and long-time producer, recently profiled in Fortune’s Most Powerful Women issue. “Every single fan girl had to have that t-shirt after that [the Star Wars Celebration].”

Eckstein is a trendsetter in her own right. She is an actress who provides the voice of Ahsoka Tano in the animated Star Wars Rebels series and a lifelong fan of the space saga. After she got the part she started making appearances at the annual Comic-Con convention and other events, and searched for Star Wars-themed clothes to wear. That’s when she realized there wasn’t much out there, and the light bulb went off. She discovered that while about half of Star Wars fans are female, and women make roughly 85% of purchasing decisions, brands catering to sci-fi fans had largely overlooked this vast demographic. In 2009, Eckstein created HER Universe.

“For so long there has been gender marketing and a boys’ aisle and pink aisle,” says Eckstein. “You’re programmed to think Star Wars is a boys’ property. It just became something that society just did.”

The few girls’ and women’s lines out there, says Eckstein, were badly sized—and pink. As for her first line? “All of the t-shirts were purposely gray, black, blue or brown,” she says. The characters featured were also carefully considered: Growing up, Eckstein wanted to dress up as R2D2, not Princess Leia.

“These were characters that we knew were popular for women but weren’t stereotypically female,” explains Eckstein.

Getting the company off the ground wasn’t easy. Even the folks at Lucasfilm, creator of the Star Wars franchise, had their doubts, and turned Eckstein down the first time she came asking for a license to the brand. But after she found a business partner and perfected her pitch—adding community-building events to her strategy for promoting the line—she says she received incredible support from the company.

The license she initially received, however, was very limited. At the beginning, it only allowed her to sell her wares at conventions and Disney theme parks (Lucasfilm is owned by the Walt Disney Co.).

“It seemed really restricting, like we had the odds stacked against us,” says Eckstein. “But it was the best thing Lucasfilm could have done for us—if you go into retail and fail you don’t get a second chance.”

The restrictive license forced Eckstein to build up her brand before pitching to larger retailers. She started selling her t-shirts at events. The first opportunity she had to set up shop at Disney, she sold five times the inventory that products in her category normally sell at the theme park. (Today, she says she is delivering about 30 different designs to Disney parks and stores). Eventually, she was able to take her expanding clothing line—including lightsaber-patterned skirts and Yoda-decked scarves—to retailer Hot Topic, which sold out of inventory almost immediately following her launch.

Next up for Eckstein: expanding her apparel line (she already sells Star Trek and Doctor Who-themed clothing) and distributing through more and more retailers. She is also organizing fashion shows for female sci-fi fans, and says she has lots of other plans to grow her brand outside of Star Wars. But there is no doubt that Kennedy’s endorsement at the Star Wars Celebration gave her company a big bump.

The new Star Wars episode, The Force Awakens, hits theaters December 18 and is expected to bring in $5 billion in branded merchandise in 2016 alone, according to analysts. While Eckstein’s company is still small (especially when compared to huge Star Wars licensees like Lego and Hasbro), she is hoping to get a piece of that growing pie.

“Female fans have always been there,” says Eckstein. “To me Star Wars is a story of hope, and good overcoming evil. You can’t put gender on that.”