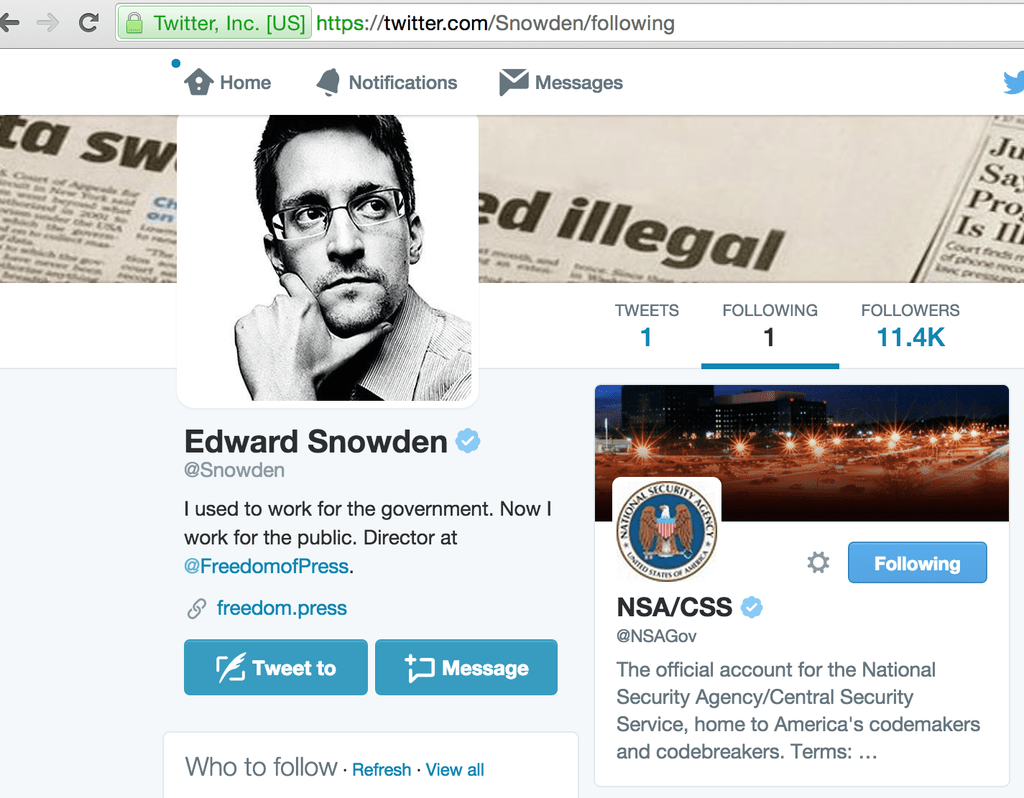 In an interview last week with Fusion‘s Kashmir Hill, Snowden hinted that he might soon join social media. “You’re obviously on the internet a ton,” Hill said, premising her question. “Why are you not blogging or tweeting?”

Snowden in turn replied that he has strict operational security reasons for staying off social networks. In a nutshell, they collect too much data on users, he said.

“Facebook, for example,” he said, “databases how long you’re on each page, what posts you click on, what pictures you’ve seen, and they store this permanently.” Plus, he added: “exploit codes [could be embedded] into transactions I’m receiving from a legitimate service and compromise the security of my devices.”

Nevertheless, he concluded, he is “looking forward to, hopefully, participating [on social networks] in a more open and active manner in the near future.” Apparently, that time is now.

Earlier today he posted his first tweet: “Can you hear me now?” A joking nod, one might guess, to the tagline of “the Verizon (VZN) guy,” a former spokesman for the telecommunications giant.

Can you hear me now?

The astrophysicist Neil deGrasse Tyson conducted an interview with the NSA contractor turned mega-leaker earlier this month, too. In Part two of that session, which appeared Friday night on Tyson’s “star talk” radio show, the two discussed the micro-blogging service.

“That sounds good,” Snowden said. “I think we’ve got to make it happen.”

“You and I will be Twitter buddies,” he continued. “Your followers will be: the Internet, me, and the NSA.”

In a preemptive move, Snowden followed the NSA’s official account “@NSAGov” shortly after joining. (See photo above.) As of the writing of this post, the NSA has not—at least officially—returned the follow.

.@neiltyson Thanks for the welcome. And now we've got water on Mars! Do you think they check passports at the border? Asking for a friend.

.@neiltyson Surveillance never sleeps, and secret projects @FreedomofPress are keeping me busy, but I still find time for cat pictures.

According to The Intercept, which cites Snowden’s lawyer, Ben Wizner of the American Civil Liberties Union, Snowden is indeed the man behind the @Snowden handle. “The @Snowden handle had been taken by someone who hadn’t used it in three years,” writes Intercept reporter Dan Froomkin. “So Twitter was contacted, and agreed to turn it over to Snowden himself.”

Kudos, Mr. Snowden. Fortune still can’t even get its hands on @Fortune!

For more on NSA revelations follow Fortune at the handle @FortuneMagazine on Twitter. Or watch this video below.