Don’t stick a fork in it yet: Benihana Hawaii restaurant battle sizzles on 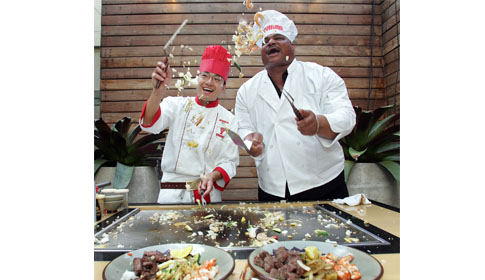 In an all too predictable twist, there will be more legal dollars expended in the fight over a Benihana restaurant in Honolulu.

Earlier this week, I reported that Benihana of Tokyo’s (BOT) CEO, Keiko Ono Aoki—the third wife of late Benihana founder Rocky Aoki—had emerged victorious (sort of) in one of her many legal battles when an arbitration panel last Friday decided BOT could continue to operate its highly profitable restaurant in Hawaii.

Located on the grounds of the Hilton Hawaiian Village Waikiki Beach Resort, the restaurant has been at the center of a long, bitter, sometimes absurd battle between BOT—which controls the brand in most foreign markets—and Benihana Inc. (BI), which operates the teppanyaki chain in the U.S. In February 2014, BI terminated BOT’s license to run the Honolulu hibachi joint over numerous alleged violations of the licensing agreement. Chief among them: Ono’s crew was selling hamburgers in Hawaii and promoting Benihana with the Beni Girls, a pair of spatula-wielding hip-hop dancers dressed in chef costumes.

The arbitrators found BOT’s hamburger business was most certainly a violation, but also that it was unreasonable to terminate BOT’s license to operate the restaurant because of it. (They wrote rather approvingly of the Beni Girls.)

BOT was, however, enjoined from selling “unauthorized food items” and for publishing advertisements without BI’s approval in the future. And it was stuck with $1.1 million of BI’s $1.7 million legal bills.

Even so, that outcome didn’t sit well with BI, which Fortune has since learned swiftly filed a petition in New York federal court to have the arbitrators’ decision partly vacated (they ask the award of legal fees be confirmed). In its filing, BI charges the arbitration panel with exceeding its powers and acting in “manifest disregard of the law” when it denied the termination of the licensing agreement.

Joseph Manson, an attorney who represented BOT in the arbitration proceedings, calls the petition a natural extension of BI’s strategy to drag out proceedings and “to cause BOT to expend unnecessary legal fees.”