As a Valley solar startup shuts down, the solar sector booms 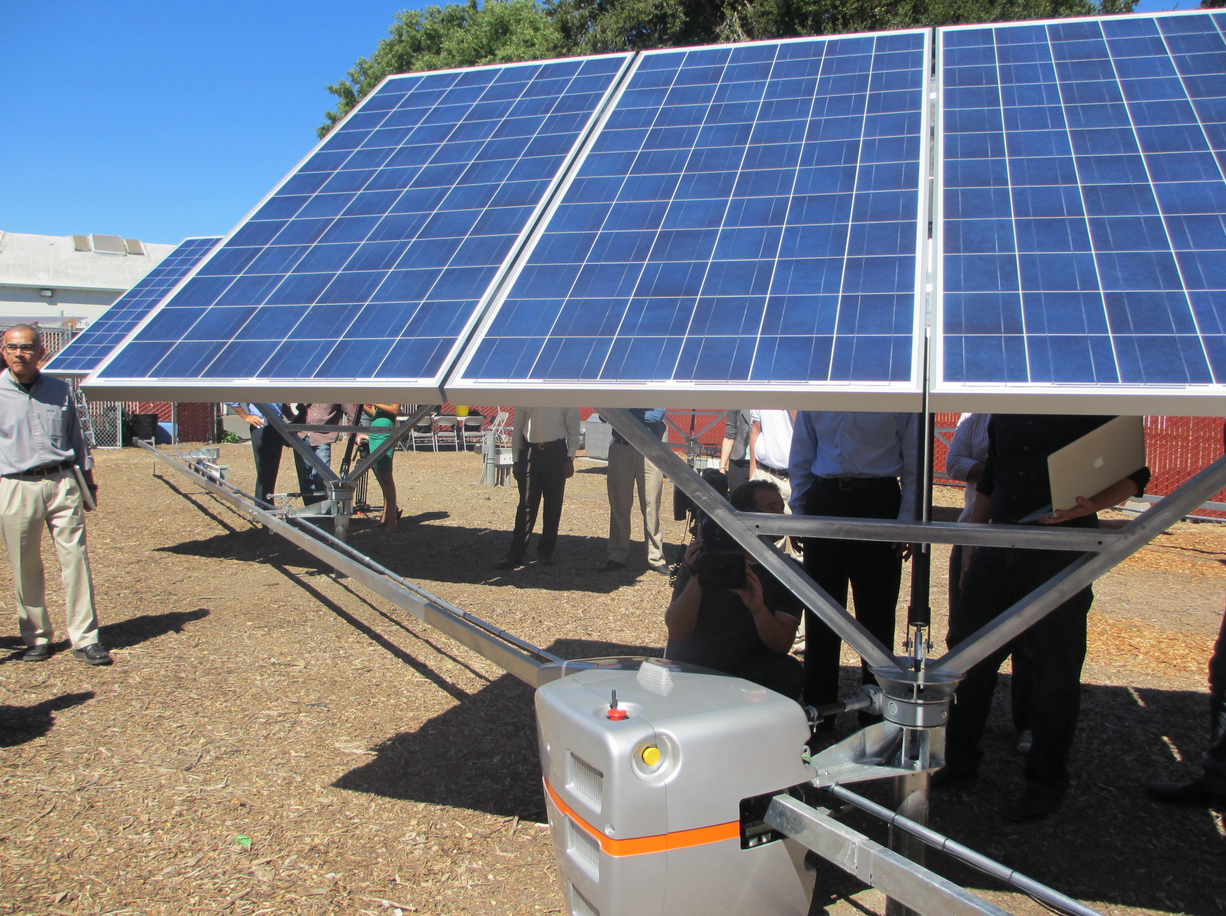 Three years ago, a promising startup called QBotix showed off a new type of robotic solar technology for the first time.

In a yard in an industrial corner of Menlo Park, Calif., the company’s robots slid around a thin metal track and, every 40 minutes, tilted a group of solar panels so they’d face the sun while it moved across the sky.

While many of the biggest solar farms use what are called “trackers” to continuously tilt solar panels and increase the amount of energy generated, QBotix was the first one to use robots to manage the trackers.

Unfortunately, despite the company’s novel idea, it didn’t succeed in finding enough customers. Last month, after raising millions of dollars from venture capitalists, and tweaking its robot trackers a couple of times, the company shut down, according to a report this week from Greentech Media.

The story of failed cleantech startups isn’t new to Silicon Valley. Many venture capitalists have lost a lot of money backing early stage energy technologies that took more money and time than expected to get to market.

Overall, that’s actually a good sign for the increasingly mainstream solar industry. While generating energy from solar was once far more expensive than from fossil fuels, today in some regions large solar farms (the kind that use trackers) are competing, and sometimes even beating, the cost of fossil fuels.

This summer, Warren Buffett’s utility in Nevada, NV Energy, agreed to pay a record low cost of just under 4 cents per kilowatt hour for solar electricity from a large solar panel project. That’s a similar price to what coal or natural gas can cost, but without the associated carbon emissions.

QBotix, which was founded in 2010, intended for its solar trackers to be lower cost and less prone to failure than traditional trackers over the expected 20-year lifetime of a solar panel farm. However the company had high upfront costs, a complex system, and nascent technology.

Big solar panel farms —like the kind built in the California deserts— regularly use trackers to boost the amount of energy generated by each solar panel. There’s two types of solar trackers: single-axis trackers, which are cheaper and make fewer and wider tilts, and dual-axis trackers, which cost more but tilt panels more precisely and generate more energy.

QBotix was making dual-axis trackers, but using robotics to move the panels, in an attempt to make a more simple tilting system. But over the three years that QBotix operated, the cheaper single-axis trackers got cheaper and the technology got even better.

Over the years, all solar hardware —and in particular solar panels—have been declining in price and getting more efficient. Solar companies are now increasingly focused on buying low-cost single-axis trackers.

Likewise the companies that build solar panels farms are becoming more conservative, and are increasingly unwilling to buy solar gear from a young startup. The fear is that if there’s a problem with the technology, the startup might not be around in several years to fix the problem. In contrast, a huge company like GE can use its big balance sheet to fix any occurring technology problems.

QBotix tried a variety of ways to reduce the costs of its systems by making its technology easier to use, and making its trackers easier to assemble. A year after the company debuted its technology, QBotix started selling an updated version of its tracking system that could tilt more panels with the same number of robots.

In recent months, QBotix tried to switch to licensing its technology and selling its software, Greentech Media said. The cost-cutting move came too late, and the company ran out of money.

Last year, QBotix raised $12 million in funding led by huge global energy companies E.ON and Iberdrol. Before that, QBotix had raised another $12.5 million from NEA, Firelake Capital, DFJ JAIC, and the Department of Energy’s SunShot Initiative.

About $25 million isn’t a lot of money to develop new solar tracking technology. But some of QBotix’s investors that have lost money on energy tech deals in the past, were likely unwilling to continue to fund slow-moving energy technologies.

As solar companies build some of the world’s largest solar panel farms in the Southwest, robots will not be tilting the panels.

There’s now enough solar installed across the U.S. to power 4.6 million homes, according to the industry group the Solar Energy Industry Association. The majority of solar panels operating in the U.S. are in large ground-mounted solar farms, which commonly use trackers.

To learn more about the solar industry watch this Fortune video: