Goldman Sachs has a potty problem 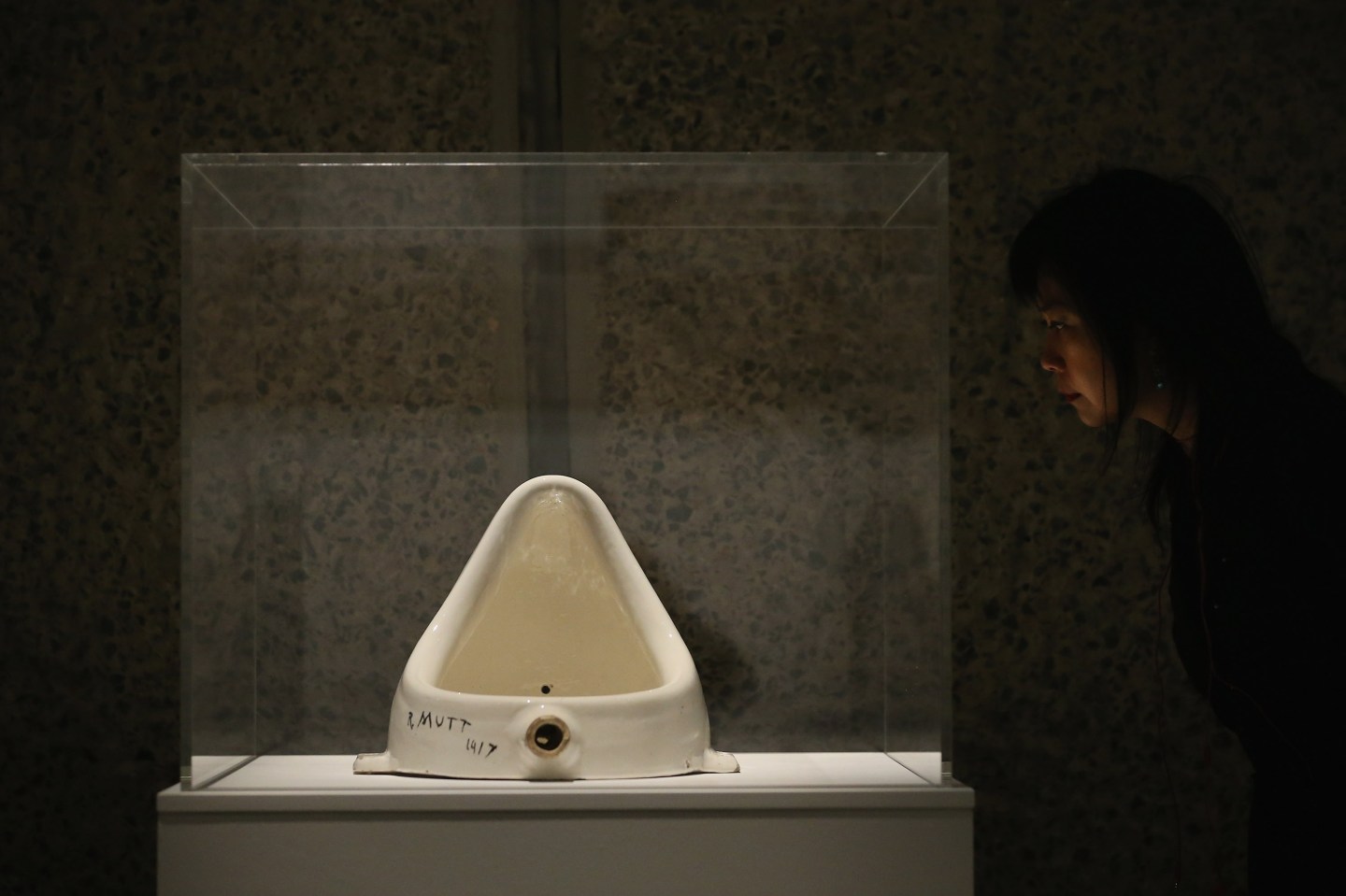 LONDON, ENGLAND - FEBRUARY 13: A woman looks at a piece of work entitled 'Fountain' by Marcel Duchamp during a press preview of 'The Bride and the Bachelors' exhibition at the Barbican Art Gallery on February 13, 2013 in London, England. The piece makes up a selection of works by artists and choreographers including Marcel Duchamp, Merce Cunningham, John Cage, Robert Rauschenberg and Jasper Johns, and runs at the Barbican Art Gallery until June 9, 2013. (Photo by Dan Kitwood/Getty Images)
Photograph by Dan Kitwood — Getty Images

In Goldman Sachs’ old office headquarters at 85 Broad Street in New York, the trading floor had one men’s bathroom—by design.

The idea? To promote egalitarianism and to keep rumors in check. A strategy not dissimilar to Steve Jobs’ insistence on centrally locating bathrooms in the animation studio Pixar’s main building in order to promote creativity and the exchange of ideas. (Though contrary to myth, Pixar had more than one set of bathrooms.)

“When we set up an enormous trading room, we deliberately built it on one floor and had only one men’s room,” the investment bank’s late former partner and financial guardian George E. Doty recounts in the book The Partnership: The Making of Goldman Sachs by writer Charles D. Ellis. “Standing side by side at urinals, everyone’s an equal.”

“I went to the bathroom as often as I could in those days,” he adds.

Since then, however, Goldman (GS) has encountered a potty problem.

Here’s why. When the $80 billion financial firm moved to its current headquarters at 200 West Street, it set aside three floors for trading. The desks there bustled until the aftermath of the financial crisis when stricter regulations, cost reductions, and the march of technological automation led to fewer traders at the firm. Seats emptied, and office space became more vacant than had been originally anticipated, reports the New York Times.

CEO Lloyd Blankfein apparently found the dwindling number of traders to be “unsightly and potentially unproductive,” reports Nathaniel Popper, a Times Dealbook writer. So the company moved its traders around in the hopes that they “work in closer proximity to promote collaboration.”

MORE: “How Goldman Sachs does SXSW”

And so Goldman began consolidating its trading operation onto two floors, the fourth and fifth, by gradually decommissioning the sixth floor. But this led to a complication.

…the increased population on the two lower floors taxed bathroom facilities built for fewer people. More toilets were eventually installed. Nonetheless, some traders still go up to the sixth floor when the lines become too long, creating some of the small amount of activity in the wide-open space.

This is the state of Goldman’s bathroom facilities today, in case you were wondering. The situation is a far cry, perhaps, from the halcyon days of Doty’s water cooler/water closet system—which helped him keep an ear on the ground, “to be persistently diligent on small troubles”.

Interestingly, as a sidebar, an anecdote about bathroom etiquette at the catastrophic energy firm Enron that appeared in the Dec. 24, 2001 issue of Fortune describes how traders at the company would actively avoid using the bathroom for fear that their neighbors might look at their computer screens and use information so gleaned to their trading advantage. Goldman’s dilemma is quite different, of course.

There is a fine—albeit long—line between the promotion of collaboration and the queuing of incontinence.

According to someone familiar with the matter, Goldman cites the advantages of closer collaboration between the sales and trading staff as the reason for consolidating its 4th and 5th floors. A Goldman spokesman declined to comment on the firm’s lavatories.

For more on Goldman Sachs, watch this video, or read about bathroom etiquette from the unofficial and unaffiliated Goldman Sachs elevator gang.