Here’s what the U.S. can do about Europe’s migrant crisis, but isn’t 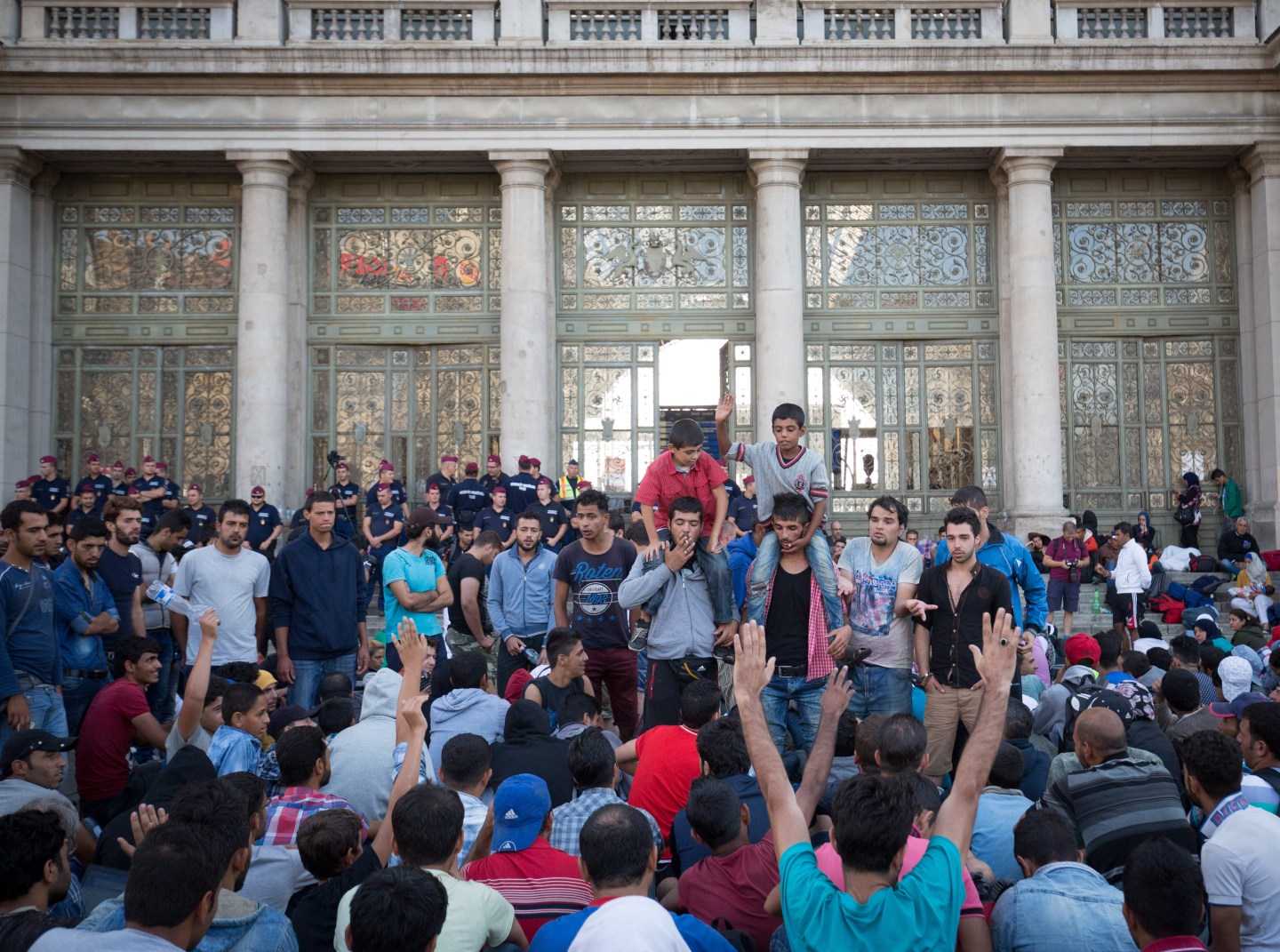 BUDAPEST, HUNGARY - SEPTEMBER 02: Migrants gather outside Keleti station which remains closed to them in central Budapest on September 2, 2015 in Budapest, Hungary. The station was closed yesterday in what was said to be an attempt by the Hungarian government to uphold EU law and restore order after recent choatic scenes at the station as migrants attempted to board trains to other parts of Europe. According to the Hungarian authorities a record number of migrants from many parts of the Middle East, Africa and Asia are crossing the border from Serbia. Since the beginning of 2015 the number of migrants using the so-called Balkans route has exploded with migrants arriving in Greece from Turkey and then travelling on through Macedonia and Serbia before entering the EU via Hungary. The massive increase, said to be the largest migration of people since World War II, led Hungarian Prime Minister Victor Orban to order Hungary's army to build a steel and barbed wire security barrier along its entire border with Serbia, after more than 100,000 asylum seekers from a variety of countries and war zones entered the country so far this year. (Photo by Matt Cardy/Getty Images)
Photograph by Matt Cardy — Getty Images

The harrowing images of migrants and those seeking asylum from Syria, Iraq, Afghanistan and a handful of African countries arriving at borders across Europe, and on the shores of Greece and Italy, have shocked millions across the globe. It is impossible not to feel compassion for people fleeing failed states where their lives may be taken at any moment, whether at the hands of a rebel fighter or government soldier, or by a stray bullet or shrapnel from a bomb. Those of us who don’t have to scale tall metal fences or sail on dinghies over rough waters are lucky—but many of us would surely do the same if faced with such realities.

The current global framework for protecting refugees and managing mixed migrant flows was not designed to handle so many vulnerable populations of such magnitude. How should Europe and United States—and the world—respond to the challenge posed by large new flows of migrants and asylum-seekers, most of whom are in dire need and deserve some form of international protection?

The United States can and should do more. The Syrian conflict is partly the result of U.S. efforts to destabilize the Assad government. America cared so much, supposedly, about Syrian lives under the Assad dictatorship; the country must also care about them now, when their lives are in far more danger. The United States also bears responsibility for the crisis because its military interventions have left failed states in Afghanistan and Iraq—two other major source countries for migrants and asylum-seekers—as well as in Libya, where U.S. air strikes helped create a global hotspot for human trafficking and smuggling.

To date, the United States has given about $4 billion for relief efforts, but has only taken in 1,500 Syrian refugees, and granted temporary protected status to about 2,600 already in the country. On Sunday, U.S. Secretary of State John Kerry announced that the Obama administration will increase the annual limit of refugees that America accepts from around the world over the next two years: In 2016, the current quota of 70,000 will be increased to 85,000, and in 2017, it will increase further to 100,000. This is significant and praiseworthy, but the number of Syrian refugees to be resettled will still remain far lower than Europe’s total, despite the United States having a population of roughly the same size. The Obama administration has hinted at a willingness to accept more Syrian refugees, but in order for that to happen, Congress will have to step in and appropriate more funds for resettlement. Unfortunately, the current Republican-controlled Congress is unlikely to do so.

The immediate priority for European Union member states is protecting and processing those migrants and asylum seekers who cannot return to their home countries, and then apportioning the numbers amongst themselves in an equitable manner according to the size and economic conditions of each country. A good starting point for Europe would be the EU Commission’s sensible new proposal to determine how 120,000 persons in need of international protection who have arrived in Greece, Italy, and Hungary should be shared among member states. The number of asylum-seekers each country would have to accept would be mandatory, but the Commission’s formula for distribution takes into account each country’s population, GDP, the average number of past asylum applications, and unemployment. On September 14, this quota distribution proposal was initially rejected by EU interior ministers; the ministers will reconvene today for further talks. Member states should adopt the Commission’s proposal because it recognizes that most of the migrants and asylum-seekers are of working age and arriving in some European countries with stagnant economies that are saddled with debt. That’s why the Commission’s plan takes economic conditions into account and keeps the number of persons assigned to each country at reasonably low levels. Even if the 120,000 persons that will be resettled in this way were to increase by five- or six-fold over the next few years, the EU could certainly manage to integrate that many.

In general, labor migration levels in all countries should fluctuate, increasing and decreasing based on the health of the economy, because the labor market needs time to adjust to new workers when fewer jobs are available. But in a crisis, stable countries should be generous and allow humanitarian migration levels to increase temporarily, despite possible negative impacts on the labor market. The Commission’s proposed policy allows EU countries to comply with their legal obligation to protect bona fide refugees, but to do so with little risk to their economies and labor markets. Compare 120,000 refugees to Turkey, Jordan, and Lebanon, which so far have done the heavy lifting for the world by hosting nearly 4 million “persons of concern” from Syria. These countries have not seen a major deterioration in their employment situations yet. That’s a good sign, but resources are thinning and tensions are increasing, which is why all three deserve much more foreign aid to cope.

For some countries, the influx of young workers presents a valuable opportunity. Germany—with its aging workforce, declining population, and low unemployment rate—is ideally situated to lead the way and receive the largest share of new migrants and asylum-seekers. The government projects it will receive 800,000 asylum applications by the end of 2015 and has proven its commitment to meet the challenge by announcing a plan and pledging to spend $6.6 billion to manage the new flow. It’s true that Germany faces a formidable challenge to quickly educate, train, and integrate so many migrants and asylum-seekers, since they will not enter through the regular skills-based labor migration channels crafted to match migrant worker skills with the needs of the labor market. But if done right, the investment will pay off. In fact, an Oxford Economics study forecasts that a sharp increase in German growth will result: an influx of 1 million people over the next three years would raise the country’s GDP by 0.6% by 2020.

Other rich countries should coordinate with the EU to take in new migrants and asylum-seekers, too. The Persian Gulf states deserve credit for donating billions to relief efforts, but few seek protection in the region because Gulf States do not resettle refugees, despite their wealth and geographic proximity to the affected populations. Nor have Asian nations accepted significant numbers of asylum seekers. Japan —with its low birth and unemployment rates—could especially benefit from an influx of migrant workers, but it prefers to give cash instead.

The world must be generous in the short term by accepting refugees and increasing foreign aid. In the long-term, citizens around the world must demand that their governments engage in coordinated, intense efforts to stabilize conflicts in Syria, the Middle East, and Africa by achieving durable political solutions that reject new military occupations or bombing campaigns. Otherwise, migrants and asylum-seekers will continue to flee those conflict zones for the foreseeable future, and it’s doubtful that any workable solutions will be found quickly if another five or six million persons seek protection outside their home countries in the coming years and decades.