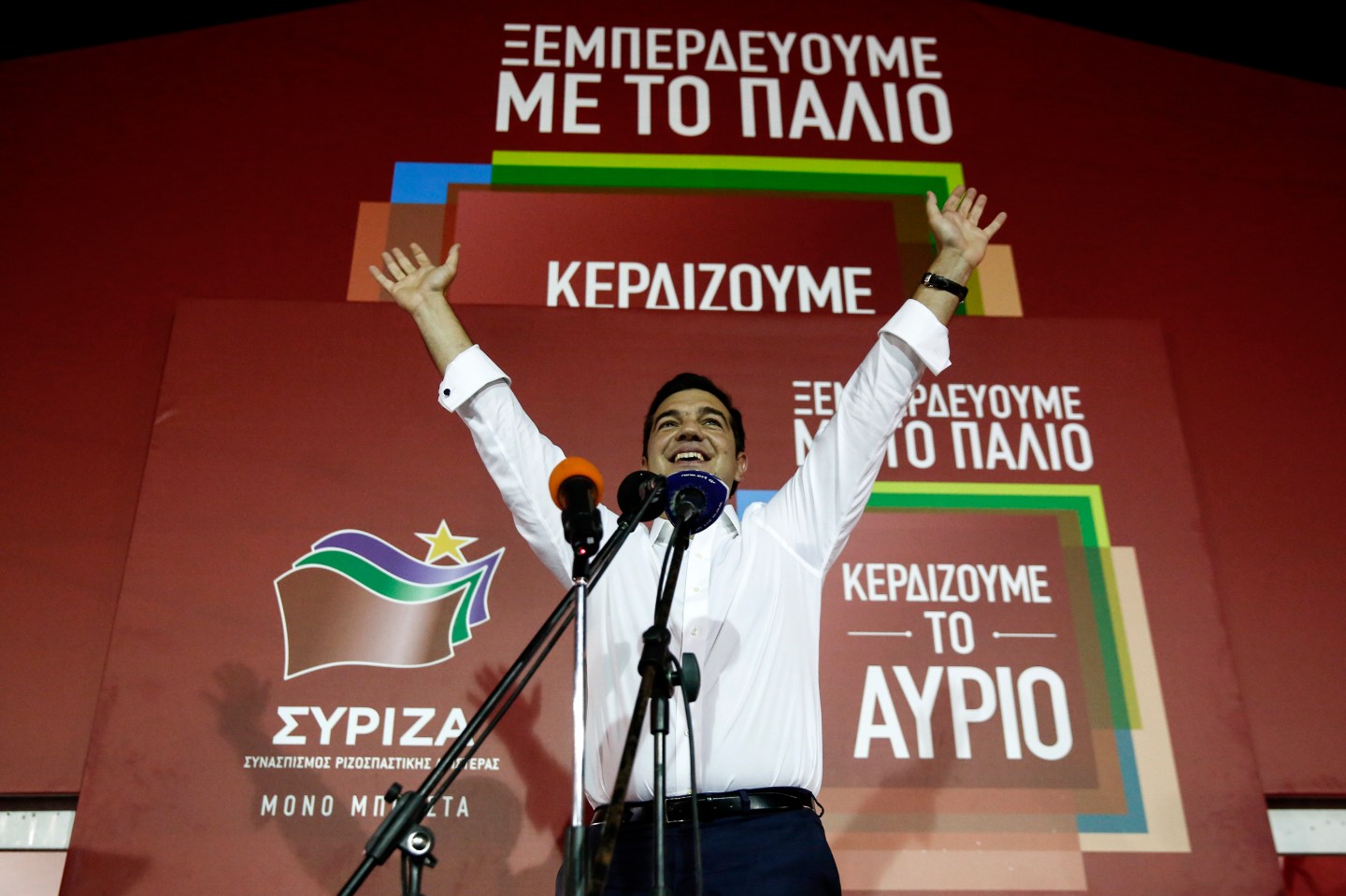 The drama surrounding Greece’s third bailout could return haunt investors this week. On Sunday, Greek Prime Minister-elect Alexis Tspiras claimed a solid victory in national elections, saying the result gave his Syriza party a new and clear four-year mandate. In the U.S., a speech by Federal Reserve chair Janet Yellen could shed further light on the central bank’s thoughts on the strength of the economy and the timing of a potential interest rate hike. Meanwhile, this week brings from U.S. visits from Pope Francis and China’s president, while Hollywood plans to toast the brightest stars from television.

1. Tsipras returns to power in Greece

Markets may react this week to news that Greek leftist Alexis Tsipras stormed back into office with an unexpectedly decisive election victory on Sunday, claiming a clear mandate to steer Greece’s battered economy to recovery. The vote ensured Europe’s most outspoken leftist leader would remain Greece’s dominant political figure, despite having been abandoned by party radicals last month after he caved in to demands for austerity to win a bailout from the euro zone. In a victory speech to cheering crowds in a central Athens square, he promised a new phase of stability in a country that has held five general elections in six years, saying his mandate would now see him through a full term.

Federal Reserve chair Janet Yellen is slated to speak on Thursday at the University of Massachusetts at Amherst. Yellen’s speech will be watched closely for any further opinions on the trajectory of the U.S. economy and the possible timing of the central bank’s impending interest rate hike. Last week, the Fed closed out its latest two-day meeting by announcing its decision to hold off on the country’s first interest rate hike in nearly a decade. The Fed meets again at the end of October.
[fortune-brightcove videoid=4495485079001]

After a weekend visit to Cuba, Pope Francis will make his first trip to the U.S., where he will make stops in Washington, D.C., Philadelphia, and New York City throughout the week. The Pope will address Congress, meet with President Barack Obama, and lead evening prayers at St. Patrick’s Cathedral in Manhattan during a visit that is expected to generate millions of dollars in tourism at each stop. Meanwhile, Chinese President Xi Jinping will also make his first visit to the U.S., where he will meet with Apple (AAPL) CEO Tim Cook and President Obama at a time when there is tension between the two countries over charges that China hacked U.S. government databases.

Premium cable network HBO dominated television’s Emmy awards on Sunday with trophies for best comedy “Veep” and best drama “Game of Thrones,” holding off challenges from the digital upstarts that have shaken up traditional Hollywood. HBO, owned by Time Warner (TWX), topped all networks and their streaming competitors with a total of 43 awards. It was the first time in 13 years a network won both the drama and comedy series honors. Online retailer Amazon.com shared the Emmy stage, taking five awards for groundbreaking transgender series “Transparent,” including best actor for Jeffrey Tambor. Streaming pioneer Netflix (NFLX) earned four Emmys, with Uzo Aduba named best supporting drama actress for playing “Crazy Eyes” on the dark prison series “Orange is the New Black.” Emmy awards bring prestige to networks and can boost viewership, which increases advertising revenue for channels that run commercials. For pay-cable channels and online subscription services, the recognition can help win new customers in today’s crowded TV landscape. The awards will be particularly valuable for the streaming services that are attracting “cord cutters” who have dropped cable subscriptions.