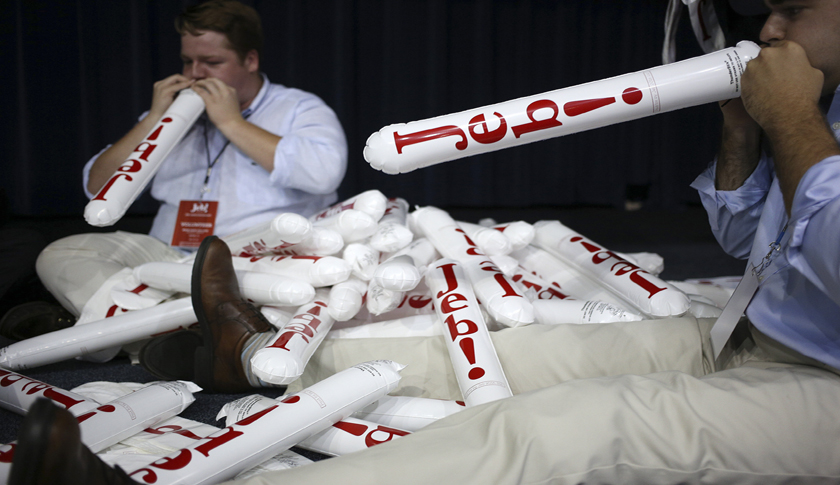 Campaign volunteers inflate "Jeb!" branded thunderstick noisemakers before the start of an event where Former Florida Governor Jeb Bush is expected to announce his intentions to run for the 2016 Republican presidential nomination on the Kendall Campus of Miami Dade College in Miami, Florida, U.S., on Monday, June 15, 2015. Bush will attempt to follow his brother and father into the nation's highest office when he officially announces today that he'll run for president of the United States. Photographer: Luke Sharrett/Bloomberg via Getty Images
Photograph by Luke Sharrett—Bloomberg via Getty Images

Presidential candidate Jeb Bush has garnered a lot of attention for his recently-unveiled tax plan, which would reduce the number of individual tax brackets, reduce the corporate tax rate and cap the total value of deductions. But it was two smaller items that caught the eye of private equity investors, and arguably caused them heartburn.

First, Bush said he would change the tax treatment of carried interest, which is the cut of investment profits private equity fund managers collect for managing someone else’s money. Carried interest traditionally has been taxed as a capital gain, whereas Bush would make it ordinary income (i.e., taxed at a higher rate). This is a change that Donald Trump has also endorsed.

Second, Bush said that he would eliminate the corporate deduction on borrowing costs (i.e., interest), which currently stands at 100%. For private equity firms that often finance a majority of their acquisitions with bank debt, this would have a significant impact on their ability to generate positive investment returns (and, thus carried interest).

If both of these proposals sound a bit familiar, perhaps that’s because you read President Obama’s Framework for Business Tax Reform, which was published in 2012 and almost immediately ended up in the bargain bin.

In this long-forgotten document, Obama proposed changing the tax treatment of carried interest:

Currently, many hedge fund managers, private equity partners, and other managers in partnerships are able to pay a 15 percent capital gains rate on their labor income (on income that is known as “carried interest”). This tax loophole is inappropriate and allows these financial managers to pay a lower tax rate on their income than other workers. The Framework would eliminate the loophole for managers in investment services partnerships and tax carried interest at ordinary income rates.

Here is how Bush phrased doing the exact same thing:

We will treat all noninvestment income the same, so unless you stake capital in an investment, you won’t be able to claim the capital-gains tax rate on your market gains.

I’ll presume that Bush isn’t being disingenuous here, creating some wiggle-room by permitting a PE fund general partner to keep getting cap gains treatment on all carried interest, so long as he’s committed a tiny percentage of the investment’s principal.

Obama also proposed a reduction in deductions on corporate debt interest payments, although he did not specify how much it would be reduced:

This tax preference for debt financing has important macroeconomic consequences. First and foremost, outsized reliance on debt financing can increase the risk of financial distress and thus raise the likelihood of bankruptcy.

We will… remove the deduction for borrowing costs. That deduction encourages business models dependent on heavy debt.

So it’s kind of like Bush borrowed from Obama’s playbook, and then did him one better by eliminating the deduction altogether (without any apparent carve-out for small business loans).

Obama also proposed cutting the corporate tax rate from 35% to 28%, whereas Bush again slashes much deeper — cutting from 35% down to 20%.

Private equity execs weren’t terribly concerned by Obama’s proposals back in 2012, namely because he had little to no Republican support on Capitol Hill. But were Bush to win the White House, you might see the buyout titans begin to sweat.