This graphic shows all the ways your car can be hacked 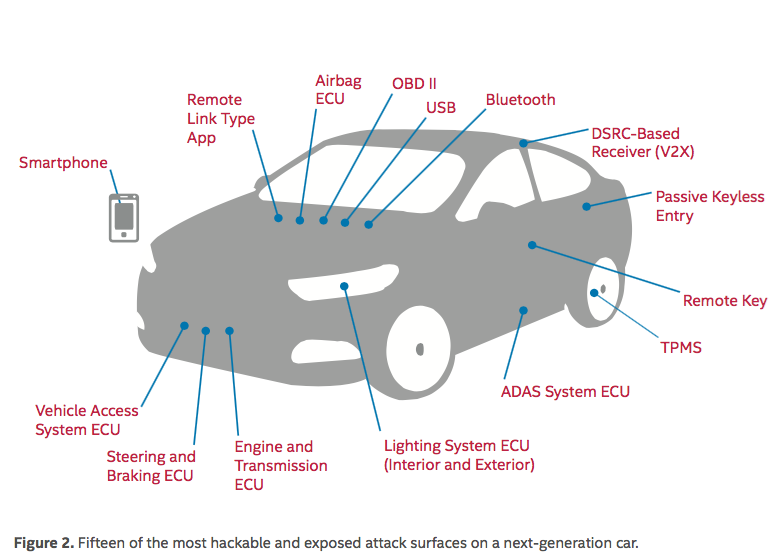 The increase in automobiles armed with internet-connected technology has opened the door for hackers looking to get into our cars remotely.

As such, Intel (INTC), one of the world’s largest manufacturers of chips and processors used in computers, has some ideas about the best ways for automakers to safeguard cars against cyber attacks.

Intel has several auto industry partners — such as BMW, Ford Motor (F), and Toyota (TM) — who use the Silicon Valley company’s technology to power in-car entertainment, navigation, and other systems. In a recent white paper, Intel outlined its “Best Practices” recommendations for how those automakers, and the rest of the industry, can best outfit their vehicles for privacy and cybersecurity “in the era of the next-generation car.”

The graphic above, pulled from Intel’s report, details the myriad entry points for hackers to gain remote access to a connected car. Intel notes in its report that there is a growing list of cybersecurity risks to automobiles: “Malware, Trojans, buffer overflow exploits, and privilege escalation.” Some of the biggest security issues automakers need to address, according to Intel, include creating a secure authentication system that ensures the various connected systems in a car are communicating with one another rather than an unknown, outside source. Intel also recommends increased security measures throughout the supply chain to prevent tampering or counterfeit parts entering a vehicle.

The report comes amid increasing concern over the security of internet-connected cars, especially following a recent Wired report on how hackers infiltrate computerized vehicles. As Intel looks to continue working with the auto industry on in-car technology, it certainly benefits the Silicon Valley company to ensure that those internet-connected systems are secure, lest consumers get scared off from the connected-car trend.