Apple iPhone sales pace: What the analysts are saying—updated 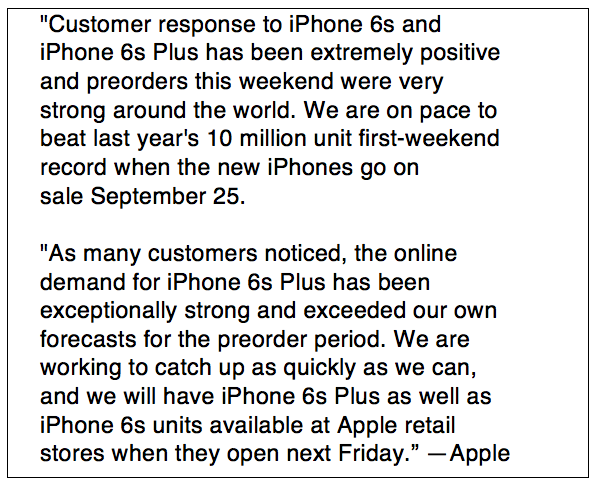 Gene Munster, Piper Jaffray: Dissecting The Numbers. “Apple commented to the media this morning that it is on track for the iPhone 6S launch to beat the 10 million opening weekend sales from the iPhone 6 last year. We expect the actual 6S opening weekend number that will likely be announced on Monday, September 28th to be 12-13 million units. From a high-level, the iPhone 6S cycle seems to be off to a 10-20% better start than the iPhone 6, but note that given China is launching for the first time in the initial launch. Excluding China, the numbers likely suggest 0-10% growth from the 6 launch. We are modeling 3% y/y growth for the 6S cycle. Given investor concern around the difficult comps in 2016, we view today’s update as a solid start to the 6S cycle.” Outperform. $172.

Toni Sacconaghi, Bernstein: Initial thoughts. “We see this news as mixed. On one hand, first weekend sales that will be higher than last year’s is clearly a positive, given how strong the iPhone 6 cycle was. That said, typically Apple provides an update on the number of orders it receives during its first 24 hours. It has done so for 4 of the last 5 iPhones introduced, with the only exception being for the 5S phone, which did not take pre-orders. Apple did not provide this figure today, raising the question of whether it *might* be lower than last year’s total of 4M. Additionally, we would note that “first weekend sales” is really a reflection of Apple’s ability to supply phones, rather than a reflection of customer demand. Outperform. $135.

Kulbinder Garcha, Credit Suisse: Sales continue to inspire. “We believe this news supports our belief, as stated in our note (“Apple still solid”), that iPhone demand remains resilient. Strong demand and a growing installed base give us confidence that our CY15/CY16 iPhone estimates of 234mn/241mn may prove conservative. Outperform. $145.

Walter Piecyk, BTIG: “While this is encouraging, first weekend sales includes China this year, more than doubling the addressable market for launch day compared to last year when China was not launched until mid-October. It’s therefore not surprising that sales would be up and should not be taken as strong evidence in support of our view that it can grow iPhone sales in this December quarter. We guess the next question will be whether Apple even reports first weekend sales on September 29th, as they have for every launch except for the first iPhone.” Buy. $160.

Maynard Um, Wells Fargo: “We also highlight our online checks on Saturday which showed the larger 6S Plus reaching extended ship times much more quickly on the first day of preorders versus the 6S, suggesting a strong mix to the higher ASP iPhone […] With Apple indicating more carrier launches by year end versus last year, we believe it is possible units could be up year over year in the December quarter. We also believe ASPs should remain strong (if not stronger) on iPhone 6S Plus mix.” Marketweight. Valuation range: $125-$135.

Daniel Ives, FBR: iPhone 6s Pre-orders Off to a Strong Start Led by China. “This weekend Apple kicked off pre-orders for its freshly launched iPhone 6s/6s Plus with retail stores set to sell on September 25. Initial demand looks strong based on estimated wait times as displayed on Apple’s Web site and various blogs. Most importantly in our view, the wait time of iPhone 6s Plus in China is already running three to four weeks, and two to three weeks for the 6s. The U.S. and U.K. also looked strong on initial pre-order data, showing wait times of roughly three to four weeks for 6s Plus with shorter wait times for 6s depending on model/carrier. While there are still unknowns about inventory levels, we note that China demand in particular looks “very strong” out of the gates and is a positive sign that the white-hot momentum out of this region shows no signs of abating despite macro headwinds out of China.” Outperform. $175.