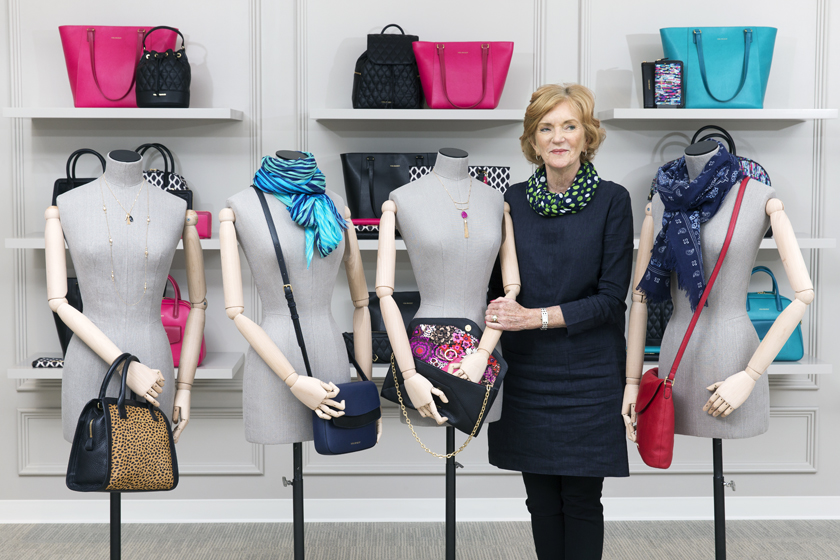 Don’t be drab. That notion impelled stay-at-home mom Barbara Bradley to begin selling colorful handbags—cutting fabric on her Ping-Pong table—in 1982. She borrowed $250 from her then husband and, with a co-founder and help from a passel of friends and family, launched Vera Bradley. Three decades, a remarriage, and a new surname (Baekgaard) later, she is 76 and her brand is sold in 2,700 specialty shops and 148 company-owned stores and garners annual sales of $509 million. Baekgaard’s story:

I never saw myself going into business. I grew up in Florida, where my father was a sales rep and later part owner of a candle company. My mother, Vera Bradley, was a model for Elizabeth Arden in her youth.

I left college two credits shy of a bachelor’s degree, got married, and had four children in five years. I was a stay-at-home mom in Fort Wayne—my husband owned a paper distributorship—when I met Patricia Miller, who lived on the same street. We became friends. I loved hanging wallpaper, so Pat and I started Up Your Wall, a hobby that made us a little money hanging wallpaper.

In 1982 we came back from visiting my parents in Florida and were at the Atlanta airport when we noticed no one was carrying anything colorful or fun. So we decided to start a company to make handbags and luggage for women. My mother had great style, and we decided to name the company Vera Bradley after her.

We didn’t have any cash, so we each borrowed $250 from our husbands and bought some fabric. A seamstress made the first bag, then we put an ad in the newspaper for people who wanted to sew in their homes. We cut fabric out on a Ping-Pong table, put it with a zipper and other elements in a bag, and gave it to the women who would take them home to sew.

I still had two of my four children at home. We asked them to refrain from answering the phone between 9:00 a.m. and 5:00 p.m. so there was a more professional atmosphere.

Before long, a friend who believed in the idea gave us a check for $2,500. He said if we were successful, it was a loan. If we weren’t, it was a gift. That check was huge to us. Six months later we went to a bank, seeking a $5,000 loan. The first banker who offered us money seemed reluctant, so we rejected it. You want to work with people who have faith in you. We took out the loan from another bank.

We moved into the Taylor Martin Paper Co. building in 1984 and rented space upstairs for the sewing so we could concentrate on marketing and sales. My husband and I divorced, and in 1987, Vera Bradley bought a lot and built its own building in town.

Early on we knew we didn’t know how to price things or do cost analyses. So we got in touch with SCORE, a nonprofit that provides free business mentoring to entrepreneurs, and a volunteer was assigned to help us. I started calling on stores, showing the bags to owners. We had no trouble getting stores to buy our products because there was nothing like it out there.

The business grew with the help of friends and family. My kids helped. My mother and a sister were sales reps. We’d walk through an airport or be at a party, carrying a bag, and people would ask about it. That was our marketing.

My father always said, “In business, you sell yourself first, your company second, and the product third,” and he was right. Business is all about forming relationships and having a company that reflects your values.

In 1984 we took a small booth in the Chicago Gift Show. A couple of years later there was an exhibitors’ party. A friend and I saw a little girl and started talking to her. I had a pair of magnet earrings in my purse and put them on her. She showed her mother, who invited us to sit with her. It turned out the woman was the wife of Will Little, the head of the gift show, and we became good friends. Will came to see our booth and moved us to one of the premier aisles of the Chicago Gift Show, and a year later nominated me to its board of directors. I ended up marrying the president of the show, Peer Baekgaard.

Being on the board, I met everyone in the gift industry. When we got into other gift shows, I kept wondering what I should wear to them. So one weekend, I made up a skirt, camisole, and jacket out of the fabric of our bags, and people wanted to buy the clothes. That’s how we got into the clothing business.

We used to do all the billing ourselves. In 1992, I sent a bill to a gentleman for $100. Those were the days of fax machines, and he sent back a note saying, “I do not owe you $100, and if I did, I doubt Vera Bradley would drop dead over it.” It was a bad week because my mother had just died. So I faxed him back a copy of her obituary and said, “You do, and she did.” I can’t remember if he paid or not, but my mother would have approved.

We opened our first retail store in 2007. Our customers range in age from 8 to 80. We’re huge with baby bags, student backpacks, and accessories. Usually, a high school student wouldn’t want to carry something her grandmother was carrying, but three generations of women carry us. It’s a sisterhood that I’m proud of.

Pat retired but is still on the board. I’m not a great finance person, so I stick to creativity, design, and marketing. I’ve got four amazing children, 12 grandchildren, and a wonderful second husband who passed away, so I’ve been a very fortunate person. Knowing my attitude, if I had a failure, I probably wouldn’t recognize it as one.

Appreciate your employees. When we first started, we’d put $50 in employees’ birthday cards and say, “This has to be spent on you.” Now, with 3,000 employees, we still put a $50 bill in their cards. Finance asks every year if we can just put the money in people’s paychecks, and I say no. When you have found money in cash, it’s just more meaningful.

Words make a difference. I hate the word “boss.” At Vera Bradley we say that we work with someone, not for someone.

Having fun creates better teamwork. Our Happy Committee is composed of associates who plan special, fun events, like shopping trips to Chicago, kayak trips, and treats of ice cream or cookies to celebrate company accomplishments.

A version of this article appears in the September 15, 2015 issue of Fortune magazine with the headline “Bagging success at Vera Bradley.”