Your airplane seat is going to keep shrinking 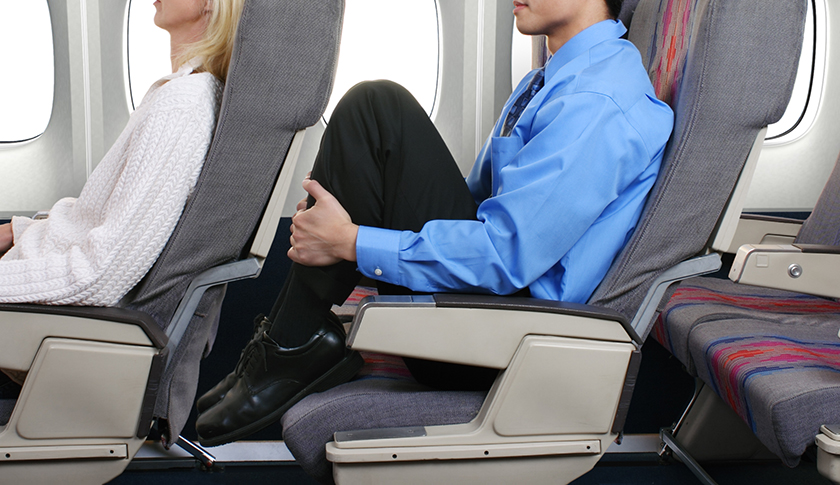 It’s not your imagination: Economy class seats on airplanes are shrinking.

The average seat pitch, a rough measure of legroom, has dropped from 35 inches before airline deregulation in the 1970s to about 31 inches today. The average width of an airline seat has shriveled from 18 inches to about 16 ½.

Meanwhile, the airline industry is enjoying record profits—some would argue as a result of cramming more seats on their planes.

But now consumer advocates want the shrinkage to stop. Passenger representatives on a key advisory committee are pushing the U.S. government to take strong regulatory action on the issue. And FlyersRights, an airline passenger advocacy group, just asked federal regulators to mandate a minimum seat width and pitch for commercial airlines. The group also delivered a petition with 30,000 signatures asking the government to take action.

Paul Hudson, FlyersRights’ president, says seat size decreases have raised concerns not just about comfort, but for the safety and health of passengers as well.

The Federal Aviation Administration (FAA) requires airlines to test their emergency evacuation plans, and they must be realistic scenarios, including baggage thrown throughout the cabin and infant dummies that need to be carried. “These tests have not been run in aircraft with seat pitches under 31 inches, even though aircraft are operating with seat pitches as low as 28 inches,” Hudson says.

Even on an incident-free flight, a lack of space can affect a passenger’s health. Flying can cause potentially life-threatening blood clots from lack of movement and cramped spaces. The condition is called deep vein thrombosis, otherwise known as “economy-class syndrome,” according to Hudson.

“Reducing the seat space even more would only expand the issue and cause greater health, safety, and comfort concerns,” he says. But without minimum passenger seat and space regulations, Hudson believes that even airlines that wish to “do the right thing” will keep reducing seat sizes in order to remain competitive and profitable.

Airlines disagree. The government’s role in seat sizing for all forms of transportation— including car, bus, rail and air—is to determine what is safe, says Jean Medina, a spokeswoman for Airlines For America (A4A), an airline trade group. “The Federal Aviation Administration has made that determination. As the safest mode of transportation, safety is always our highest priority.”

Carriers believe market forces should determine what kind of seats are offered on a plane, according to Medina. “Those offerings are one component of what drives competition and product differentiation among airlines,” she says. “And as with any commercial product or service, customers vote every day with their wallets.”

Medina notes that the Department of Transportation’s (DOT) own Advisory Committee for Aviation Consumer Protection recently declined to make a recommendation on seat sizes. But Charles Leocha, chairman of Travelers United, the consumer representative on the panel, says it wasn’t due to any accord.

“Basically, when FlyersRights sent in their petition for a rulemaking regarding minimum seat sizes and personal space, our recommendation to look at seat sizes was [already] moot,” he says. “We were not going to reach consensus in any case.”

An airline representative on the panel, A4A attorney Dave Berg, objected to the notion that the government should establish a minimum amount of space per passenger. According to a report by the Associated Press, Berg said the difference between seat sizes “goes to the heart and soul” of airline competition, and it would be inappropriate for the government to interfere in such competition by a deregulated industry.

Leocha says the matter is far from dead, however. While it’s true that the airlines with the smallest seats are growing the fastest—”The old consumers-want-more-passengers-packed-into-planes argument,” he says—the issue will be considered in an upcoming regulatory rulemaking by the DOT or the FAA, he predicts.

“I was very disappointed that we didn’t come up with a committee recommendation on personal space on aircraft,” Leocha adds. “We will work together with FlyersRights.org on the rulemaking petition.”

Seat standards prompt a bigger discussion about what passengers actually want. True, consumers do vote with their wallets, rewarding budget carriers like Allegiant (ALGT) and Spirit (SAVE) with their business. Those carriers have some of the smallest seats, and lowest base fares, in the industry. Airlines interpret that as market demand for smaller seats, so they don’t want the government interfering in a lucrative business.

But this overlooks a few important facts. In most commoditized businesses, consumers favor the providers with the lowest prices. So reducing seat size until it’s minimally safe to fly—a determination that is historically made by the FAA—is the best business move for an airline. And fighting any such regulation makes sense, too.

But is cutting space the right move? Every coach flier knows it’s impossible to be objective about this issue. As someone who stands almost 6′ 2” and still remembers the bruised knees from his last flight, I’d prefer to have a minimum amount of space on an aircraft. But in an industry that’s constantly adding fees and cutting flights, it’s pretty clear that conditions in the back of the plane are not going to improve anytime soon.