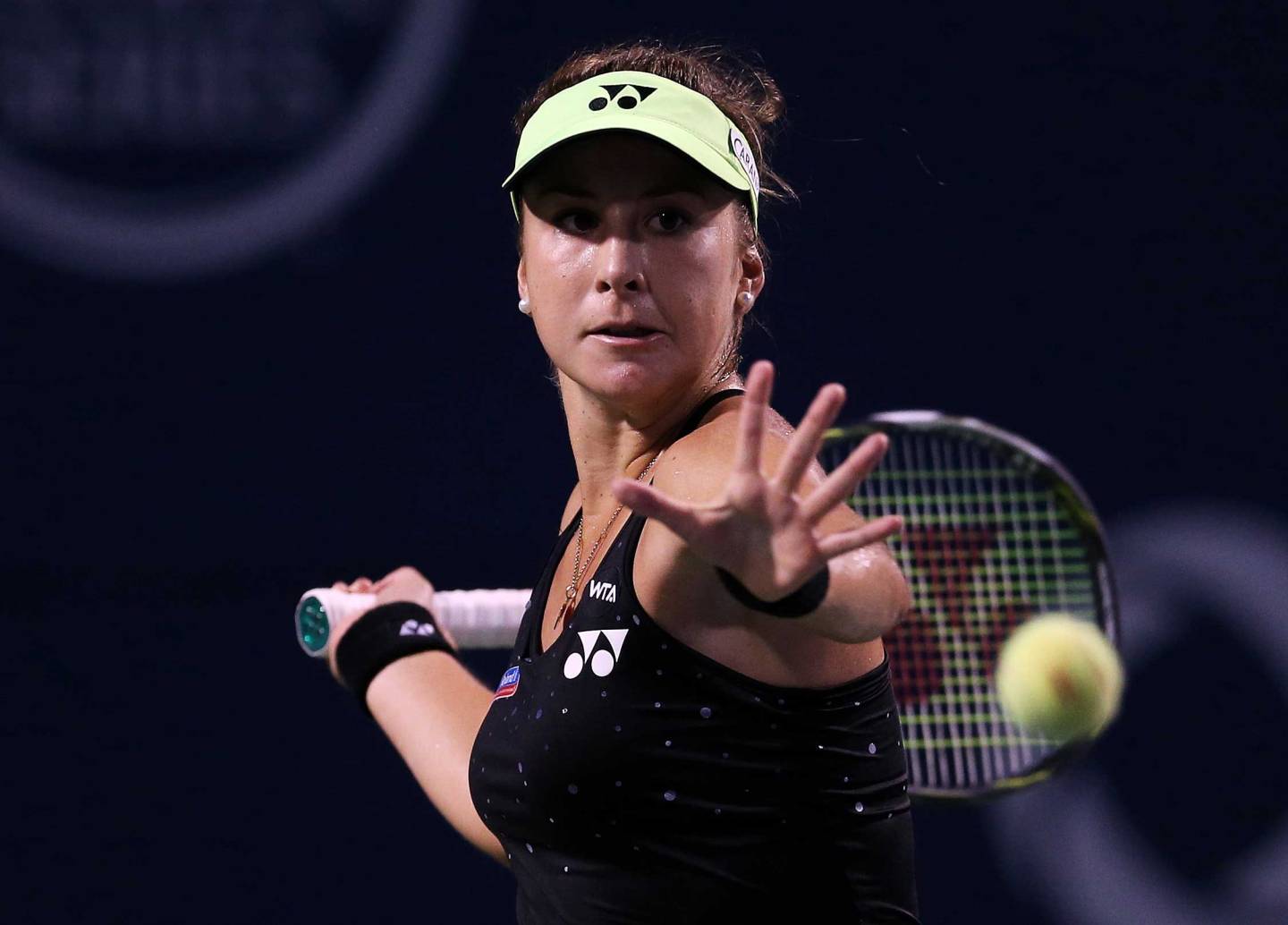 TORONTO, ON - AUGUST 15: Belinda Bencic of Switzerland plays a shot against Serena Williams of the USA during Day 6 of the Rogers Cup at the Aviva Centre on August 15, 2015 in Toronto, Ontario, Canada. (Photo by Vaughn Ridley/Getty Images)
Photograph by Vaughn Ridley — Getty Images

Having lost her first set at the U.S. Open to an unseeded player—Japan’s Misaki Doi—12th-ranked tennis star Belinda Bencic was not happy Wednesday night.

Bencic, an 18-year-old Swiss standout on the women’s tour, is unknown to most sports fans, even as she went into this year’s competition as one of only two women to beat Serena Williams this year and is coached by the mother of tennis legend Martina Hingis.

As the sun set and her match wore on, Bencic argued with the officials over calls, sobbed, furrowed her brow and even at one point tossed her racquet to the ground in front of a packed house. And like Williams, Bencic too has relied heavily on sponsors to earn a living as a pro athlete and to get to her second appearance here.

Which make showings like this potentially a sting to her reputation—and wallet. Bencic is among the fortunate tennis stars to have snagged several backers, including Rolex, Peugeot, Yonex and Cornercard. But, as with any athlete’s sponsors, there is always the specter of losing them. These companies are banking on Bencic to sell their wares—and she on them for support in the costly endeavor that is professional tennis, where $100,000 a year to support a top junior player is not unheard of. So, as she and other little-known, yet top-ranked women take to the court, there’s far more on the line than their pride.

Much of the chatter around this year’s U.S. Open has focused on the disparity between the earnings of powerhouse Serena Williams and those of her male and female rivals. Williams’ endorsement earnings, according to Quartz, were $13 million in 2015. Roger Federer’s were nearly quadruple that at $58 million. Maria Sharapova, who withdrew from the U.S. Open earlier this week citing an injury, but was seeded below Williams, outearned Williams by a large margin, with $23 million in endorsements.

But what does the world of sponsorship look like for other players on the tour, particularly women with less name recognition than Williams or Sharapova? How, if at all, will the interest in the women’s tournament at this U.S. Open trickle down to players like Bencic—highly-ranked, but not yet household names?

For the first time, the women’s singles final sold out before the men’s, with interest in Williams going for a historic 22nd Grand Slam win carrying over to other players. Bencic’s match was packed, with the majority of fans neither Swiss nor Chinese.

Yet agents and marketers typically want to invest in winners, not almost-winners, creating a paradox that is particularly sharp on the women’s tour. Those at top have a bounty of endorsements (though still yet equal to one enjoyed by the top men), but those women who are trying to work their way up and may need the financial support the most, struggle to find it.

Part of the disparity in pay may be in performance consistency, says Robert Boland, a sports lawyer and founder of Boland Sports Practice LLC. Sharapova and Williams have been among the handful of women’s singles players who consistently have remained in the top 10, which reassures sponsors that they’re investing in an athlete for the long term. The men’s rankings, meanwhile, have a slew of names that have stayed in the top for years—Rafa Nadal, Andy Murray, Novak Djokovic and Roger Federer, to name a few. For Bencic or and other little known players in the top 20 to win more deals, they have to pop up high in the rankings and stay there – not an easy feat for any tennis player, male or female.

Yet tennis, more than any other sport, has been good to women, says Boland. In 1973, the U.S. Open became the first Grand Slam to offer equal pay for male and female winners. Of the 10 highest paid women athletes, according to Forbes, seven are tennis players.

“I’d argue that sponsoring the women’s game is more compelling,” Boland said. “There are so many women playing tennis, buying that equipment, participating in the sport as fans and players….Women are consuming as much as men in terms of dollar value. There’s a lot of opportunity there.”

The fact that tennis is one of the better financial options for female athletes has drawn one of the more dynamic playing fields in sports, says American tennis player Vania King. King, who won her doubles match with Saisai Zheng of China on Wednesday, said that her goal is to see equal prize money between all WTA and ATP events. She does not have any endorsements with any of tennis’s more well-known large athletic or luxury brands, but believes that the overall finances are improving for women.

“I think we as tennis players, we have great skill and great entertainment,” she said. “It’s a different game than the men’s. I don’t like when people compare the strength of the men’s and women’s games because the talent there is let’s still the same. Men and women are different but one is not better than the other.”

Due to an injury this year, King says she didn’t pick up a racquet for several months and spent some of her off-time substitute teaching. She resumed practice four months ago.

Madison Keys, an American player currently ranked 19th in singles, who also won on Wednesday, has a sliver of the name recognition that makes players like Williams and Sharapova appealing to marketers, but said that her profile has increased during this tournament along with Williams. She counts Nike and Wilson among her sponsors.

“I have slowly kind of had my name out there a little bit more and had some success,” Keys said. She said that for the first time, she had a couple of moments of fans recognizing her while driving in Los Angeles. “So I think I’m a little bit more of a known American player.”

For foreign women competing in tennis, sponsors have been somewhat warmer. Agnieszka Radwanska of Poland, currently ranked 15th in singles, has snagged a flurry of backers, including Lexus, Amica, Workday, Lotto, Babolat, among others, and competed Wednesday wearing a shirt displaying some of their logos.

“I think it’s not really a question for me,” Radwanska said of sponsors, “But I think it’s really going a good way. I think we can see more people coming and even at the practice courts we can see a lot of people watching.”

Meanwhile, Bencic slogged through a second set and rebounded Wednesday night, ultimately powering back to overtake Doi, 5-7, 7-6(3), 6-3. The whole endeavor took nearly three hours, a far greater battle than she, fans or her backers anticipated.

“I know I shouldn’t have, like, behaved like that,” Bencic said. “For sure I know that. But sometimes I just can’t control myself right now. I for sure have to be working on that, but I think I’m not the only one who would freak out like this.”

Bencic’s next challenge in the third round will be Venus Williams, an American tennis player on the opposite end of the financial spectrum.

Bencic said that regardless of who she plays against, the attention that Serena Williams has brought to the tournament will continue to benefit other top players like her, on and off the court, as they vie for top spots.

“Serena is doing a great job for that because she’s just dominating right now,” Bencic said. “It has a lot of attention. Of course now she’s going for all four Grand Slams, so people are interested if she can do it. I think it’s very good for us when they watch us.”