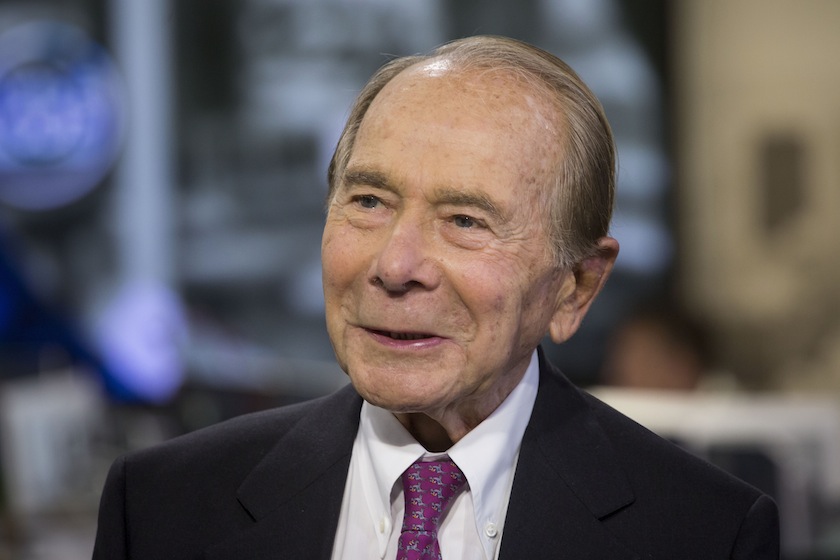 This week, Starr International, the company run by former AIG CEO Hank Greenberg, filed its appeal in the bitterly contested and highly publicized case over the government’s financial crisis bailout of AIG. Greenberg says that the judge, who found that the government’s conduct was indeed illegal—one lawyer for the Fed even wrote that the government was on “thin ice”—should also award Starr, which was AIG’s biggest investor, damages; he has argued that the bailout improperly enriched the government by at least $18 billion.

But there is another trial starring Greenberg that is waiting in the wings. It is the remnants of a civil case that Eliot Spitzer, who was then New York’s Attorney General, brought against Greenberg, AIG, and AIG’s former CFO, Howard Smith, in May 2005—a decade ago, two attorney generals ago, and in the pre-financial crisis era. The case has been delayed, and delayed and delayed again, by numerous appeals. In pragmatic terms, what’s left of the original blockbuster seems remarkably petty. None of the punishments, particularly the monetary ones, that the AG is seeking seem momentous in the grand scheme of all things Greenberg.

And yet, of all the legal thrillers starring Hank Greenberg, this case might actually be the one that matters most. The official remedies and the legal wrangling are beside the point. For both sides, it is a highly emotional battle to define the legacy of a financial industry titan.

Reading the original complaint, which accused the defendants of “routinely engag[ing] in misleading accounting and financial reporting,” is like going back in time. “American International Group is the world’s largest commercial insurance company,” it begins. “For 2004, it reported net income of more than $11 billion on revenues of nearly $100 billion. It has approximately 93,000 employees in 130 countries. For 38 years, AIG was run by defendant Maurice R Greenberg, also known as ‘Hank.’”

Even before the complaint was brought, the investigation had forced Greenberg out of the insurance giant. In 2006, AIG agreed to pay $1.6 billion to settle the AG’s, as well as the SEC’s, claims against the company. AIG also restated its financial results going back to 2000, reducing its previously reported profits by almost $4 billion, or about 10% of the total, due to what it called “accounting errors” involving the transactions in the AG’s complaint.

The original complaint detailed nine ways in which AIG’s financial results had been manipulated, and charged Greenberg and Smith with violations of New York’s Martin Act and with common law fraud. But by the end of 2006, Spitzer’s office had filed an amended complaint, dropping five of the transactions as well as the common law fraud charges, leaving just the Martin Act. Unlike common law fraud, the Martin Act, which is meant to cover “all deceitful practices contrary to the plain rules of common honesty,” does not require prosecutors to prove that Greenberg and Smith knowingly intended to commit fraud.

Over time, the government dropped two more transactions from its complaint, leaving just two, neither of which were alleged to have affected AIG’s net income or shareholders’ equity. But they did affect AIG’s reserves, which are viewed by investors as a critical measure of an insurer’s strength.

The bulk of the remaining case against Greenberg and Smith involves a transaction that AIG did with General Re, an insurance company owned by Warren Buffett’s Berkshire Hathaway, in late 2000 and early 2001 that allegedly allowed AIG to increase its reserves by $250 million each quarter. At the time Spitzer brought the charges, there was great concern about the use of so-called “finite reinsurance” transactions to manipulate an insurer’s financial statements. It’s perfectly legitimate for one insurer to reinsure another’s risks, but the deal is illegal if no risk is actually transferred. The language in the original complaint was explosive. “The entire AIG Gen Re transaction was a fraud,” it read. “It was explicitly designed by Greenberg from the beginning to create no risk for either party.”

In early 2008—just before AIG was taken over by the government, something which Greenberg and his supporters say never would have happened if he hadn’t been forced out—four former Gen Re executives and one AIG executive were found guilty in a criminal trial based on the activities alleged in the complaint.

In 2009, Greenberg and other AIG executives agreed to pay $115 million to settle a shareholder lawsuit based in part on the AG’s case; at the same time, Greenberg paid another $15 million to settle with the SEC. (Smith paid $1.5 million.) The SEC’s complaint alleges, among other things, that Greenberg and Smith “knew about the effects that certain improper transactions would have on AIG’s reported financial results.”

Neither man admitted nor denied the SEC’s allegations.

Then, in early 2011, the Second Circuit Court of Appeals overturned the convictions of the Gen Re and AIG executives. The decision itself was based on something of a technicality, but the court also noted “compelling inconsistencies” in the testimony of the government’s star witness, a former Gen Re executive named Richard Napier, that “suggest[ed] that Napier may well have testified falsely.” In a letter sent to current New York Attorney General Eric Schneiderman last fall, Greenberg’s defense counsel, the prominent attorney David Boies, wrote, “Mr. Napier is the sole witness proffered for the assertions that Mr. Greenberg, or indeed anyone at AIG, was advised or understood” that there were questionable aspects of the deal. Nor, Boies noted, did Napier ever actually speak to Greenberg. (The government did not retry the case; in turn, the executives agreed that “aspects” of the deal were “fraudulent.”) The extent to which Napier has been discredited is yet another hotly contested issue, with the AG arguing that other evidence backs him up where it matters most.

Everyone agrees that Greenberg did call Ronald Ferguson, the CEO of Gen Re, to initiate the transaction in question. But the strong language in the original complaint—that the deal was “explicitly designed by Greenberg from the beginning to create no risk for either party”—turns out to be less than iron clad.

In the criminal case, Greenberg was identified as an “unindicted co conspirator,” but he wasn’t charged. In a hearing, a prosecutor explained to the judge why that was the case. “There wasn’t a single email that we had—that we are able to produce a [sic] trial involving Mr. Greenberg that I … know of standing here … there were no recorded phone calls to Mr. Greenberg … there was no—not even—a substantial witness who spoke about this to Mr. Greenberg.”

In his deposition, Napier was asked if he knew of “any fact that would suggest that Mr. Greenberg wanted to create a no-risk transaction.” His response? “There are none that I am aware of.” Napier did say that Ferguson eventually told him that Greenberg had agreed to a no risk deal.

Essentially, the AG’s argument is that the very nature of what Greenberg asked for meant that the deal would wind up being a fraud. It was implicit, but not explicit.

Capco, the other transaction in question in the AG’s complaint, was even smaller. It allowed AIG to convert some $200 million of underwriting losses, which concern investors, incurred from 2000 to 2003, to capital losses, which do not concern investors as much. In fact, the deal was so small that the defense argues that Greenberg, as the CEO of a sprawling Fortune 500 company, was not paying attention to the details. But the AG’s office sees it as part of a family psychodrama, in which Greenberg was determined to hide losses incurred by AIG’s auto warranty business—a business that was overseen by his son, Evan Greenberg—and they argue they have the evidence to prove it.

There are a few things about the case that, on the surface, border on the absurd, even beyond the years that have passed and the punishments wrought by the financial crisis on AIG. One is that for all the years that have been consumed by this case, and all the energy that has been devoted to it, no one, not even the prosecution, is alleging that AIG was in substance a fraud, a la Enron or Worldcom. The gist of the AG’s case is that Greenberg managed earnings via allegedly fraudulent methods to present a slightly prettier picture of what was an incredibly powerful company.

Another is that current AG Eric Schneiderman has had to engage in some contortions to keep the case alive. For most of the case’s life, the AG wanted Greenberg and Smith to pay as much as $6 billion in damages to shareholders.s. But once a federal court approved the 2009 settlement between Greenberg and AIG’s shareholders, damages in the AG’s case were moot, due to a 2008 ruling that constrain the AG’s right to recovery when shareholders have already been paid under a class action. So Schneiderman’s office has asked for an injunction banning Greenberg, who is now 90, and Smith, who is 70, from the securities industry, prohibiting them from serving as officers or directors of public companies, and requiring them to disgorge the bonuses they had been paid from 2000 to 2004, which total about $28 million not including interest. (That figure certainly pales next to $23 billion.)

In a filing on Monday, Greenberg’s lawyers, who have repeatedly tried and failed to get the case dismissed, now argue that it should be dismissed because the proposed remedies aren’t permissible under the Martin Act.

And yet, there is an argument that Greenberg, who was notoriously detail oriented, cleverly insulated himself with layers of subordinates who did his bidding in ways that are not always easy to trace after the fact. Even if the transactions at issue are small, they are indisputably ugly, and the AG sees them as means to a larger and very important end—which is using them to show that Greenberg fraudulently managed AIG’s earnings. As the AG’s office wrote in a brief, “The Gen Re and CAPCO frauds were just two of many frauds committed by AIG during their [Greenberg and Smith’s] leadership.”

Says a spokesman for the AG: “We look forward to proving at trial that Mr. Greenberg knowingly orchestrated two major frauds that led to his ouster in 2005, which were illegal and caused hundreds of millions—if not billions—in losses to AIG’s shareholders.”

Meanwhile, Greenberg’s lawyer David Boies had the following response: “The AG’s office originally claimed billions of dollars of accounting misstatements. It still makes that claim in the press, but in court all claims of any misstatement of net income or shareholder equity have been dismissed, and it now seeks zero damages.” Boies also says that while the government still claims in the press that Greenberg “knowingly” orchestrated the fraud, they no longer claim that in court.

But of course, it isn’t the proposed remedies that the AG is actually after. The point is proving, in a court of law, that Greenberg was a fraudster. The AG wants a moral victory—one that Greenberg is not about to cede. And so, Greenberg will fight, perhaps to his death, to make sure that his legacy doesn’t include a finding of fraud. And the AG’s office will fight right back, perhaps right up until Greenberg’s death.