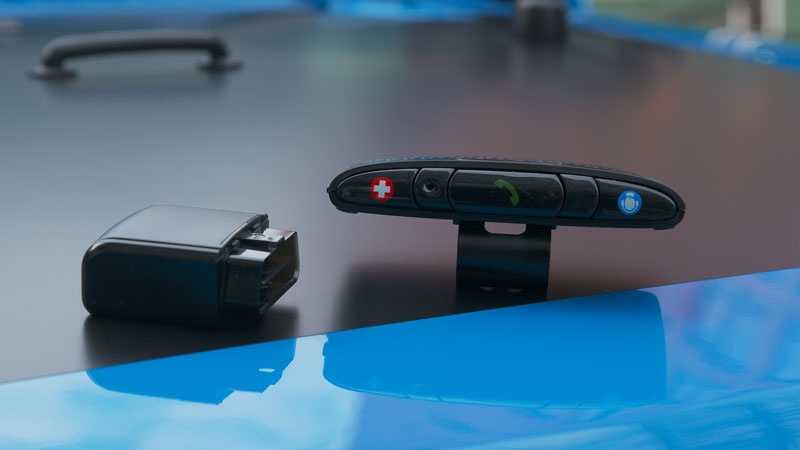 Verizon’s newly launched Hum service sounds a lot like aftermarket OnStar: it can call for roadside assistance in the case of a breakdown, and will dispatch emergency services if it detects an accident, all through a Verizon (VZ) cellular connection.

The Hum, which provides drivers with up-to-date information about their car’s health, isn’t the only connected car device on the market. It’s awfully similar to cheaper products that plug into your car’s onboard diagnostic port currently offered by two other well-funded connected car startups: Automatic Labs and Zubie.

It’s never a good sign for a startup when a giant corporation releases a similar product, but the auto telematics world is small enough at this time that a big brand, like Verizon, entering the market might boost consumer awareness about the entire category.

“One issue that’s keeping the market back is that the main providers in the market are small brands, unknown brands, so they have limited traction, limited marketing dollars to push these kinds of services,” says Jennifer Kent, research director at Park Associates. “It’s likely all of the players in this market could get a bump from Verizon.”

One key area where startups could distinguish themselves from Verizon is on price. Automatic Labs sells a $99 device that plugs into a car’s on-board diagnostics port. However, it doesn’t offer a cellular subscription just yet, but will reportedly be added to its next device. Meanwhile, its main competitor Zubie sells a device that includes cellular connection for a year, as well as similar connected features, in its $99 price.

Verizon’s Hum device is free, but the service costs $15 per month—and you’ve got to sign up for a two-year contract. Despite research that suggests that a majority of car owners would like to bundle their vehicle and smartphone data plans together, Hum is currently billed separately from its smartphone plans. Verizon is also unlikely to experiment with alternative business models that could eliminate the fee, in exchange for driver data.

Meanwhile, both startups offer features that Verizon doesn’t. For instance, Zubie can “monitor and coach” teen drivers, which is attractive to parents with teens behind the wheel for the first time. Zubie can also monitor whether a car leaves a geographic area and send an alert to parents. Automatic’s app includes Apple Watch support, as well as a program for novice drivers. Verizon’s main selling point is safety with its ability to automatically dispach roadside assistance, like OnStar.

When it comes to security, Hum matches up much better in terms of features and price to OnStar, which starts at $20 per month, and must be built into a car. Drivers can’t easily pop OnStar modules in and out of vehicles, so if drivers might want to to update their wireless connection down the line, Hum could be attractive. Still, it’s hard to imagine someone with OnStar built-in opting for an aftermarket alternative.

Verizon could have an edge in the enterprise market, which may hold the most potential for these kind of devices. Companies might prefer to outfit their fleets with vehicle trackers sporting a reliable, tamper-proof Verizon connection. Automatic’s last funding round was led by San Antonio-based insurance provider USAA, which is investigating how to use Automatic to change how it provides insurance to its customers. Zubie is working with Ohio-based insurance provider Progressive to offer discounts based on Zubie Key data.

“Verizon Telematics has a lot of experience and they can easily support large-scale insurance-type deployments in a way that the startups might not be able to manage at the moment,” says Kent.

The market for an aftermarket cellular car connection is potentially huge. According to its release, Hum is compatible with more than 150 million vehicles in the United States. Verizon getting involved in the growing connected market means many drivers could soon have a device, even if they don’t end up using Verizon’s cellular service.