Is Apple really one of the Dow’s biggest losers? 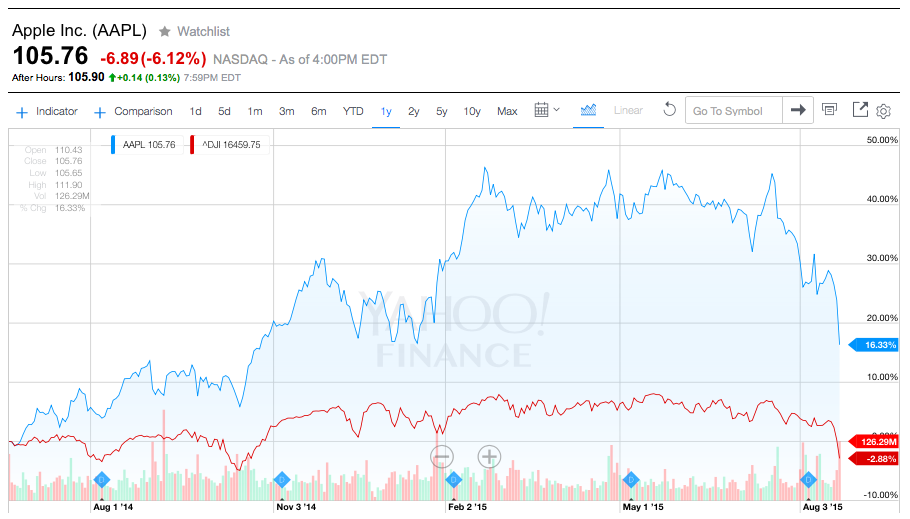 That was the headline, accompanied by a stock fever chart of the “past few months,” of a Matt Krantz story Friday in USA Today.

If Krantz had stepped back a little—to the past few years, say— it would have spoiled his story, because despite this week’s 8.8% drop, Apple has vastly outperformed the Dow.

This week, as you’ve probably heard, Mr. Market freaked out about China, a country whose growth many Dow components, including Apple, were counting on to buoy their growth.

I can see the likes of Boeing, Caterpillar, Intel and Microsoft suffering from a slowdown in China.

But Apple—with the iPhone 6/6+ still selling briskly in Beijing, with its successor rolling off the assembly line, with new stores opening across the country, with Apple Pay and streaming music and IBM and maybe, someday, a car—with all that, Apple ought to have less to fear in China, not more.

Which made last week a great week for Apple to be snapping up its own shares in the open market.

Of the $140 billion—repeat billion—Apple’s board of directors has earmarked for stock buybacks, the company had spent $90 billion as of last quarter.

UPDATE: If you’re new to all this and you’re as freaked out as Mr. Market, I recommend Ron Lieberaug’s advice in Saturday’s New York Times: Take Some Deep Breaths, and Don’t Do a Thing