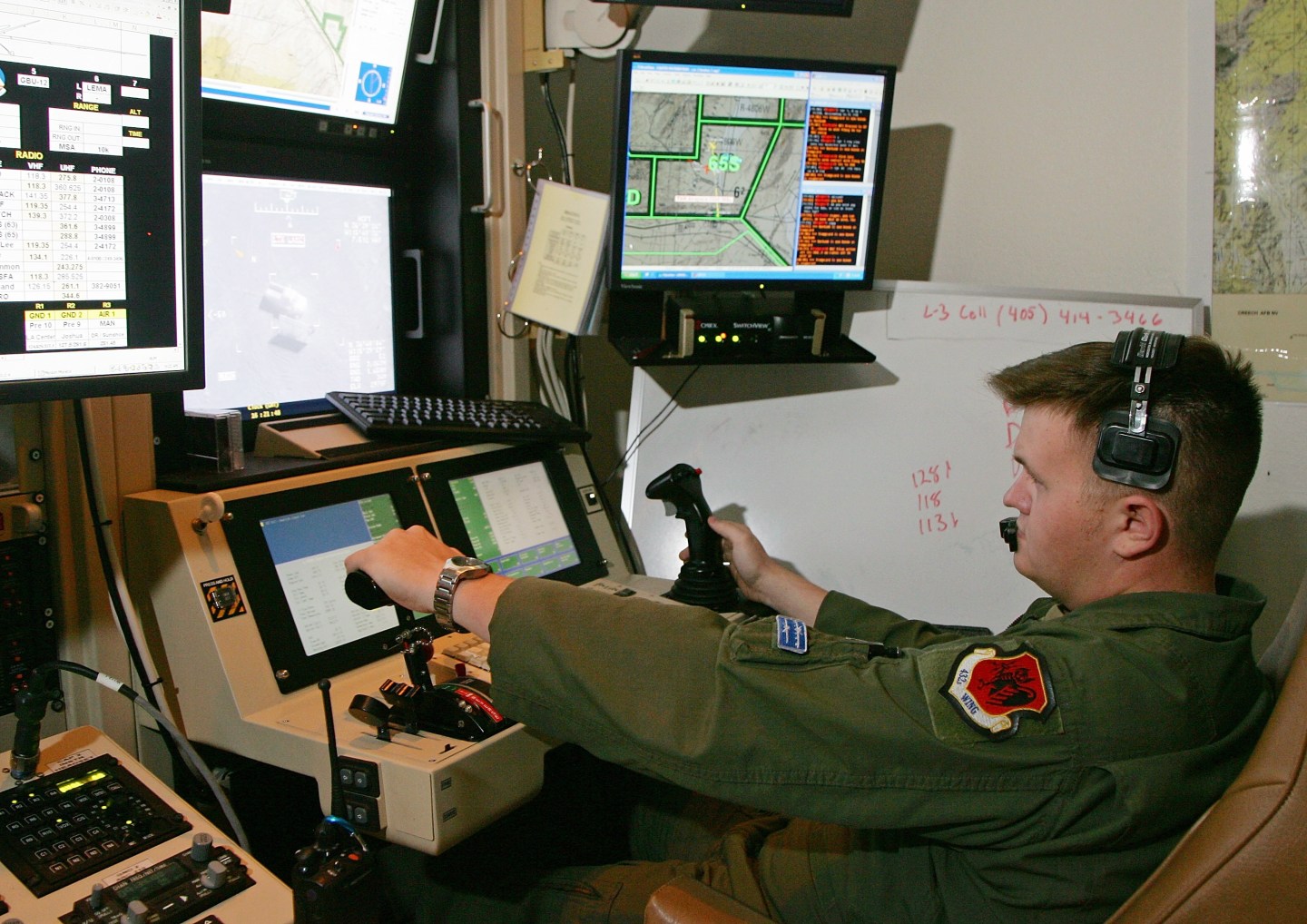 CREECH AIR FORCE BASE, NV - AUGUST 08: United States Air Force Senior Airman William Swain operates a sensor control station for an MQ-9 Reaper during a training mission August 8, 2007 at Creech Air Force Base in Indian Springs, Nevada. The Reaper is the Air Force's first "hunter-killer" unmanned aerial vehicle (UAV) and is designed to engage time-sensitive targets on the battlefield as well as provide intelligence and surveillance. The jet-fighter sized Reapers are 36 feet long with 66-foot wingspans and can fly for as long as 14 hours fully loaded with laser-guided bombs and air-to-ground missiles. They can fly twice as fast and high as the smaller MQ-1 Predators reaching speeds of 300 mph at an altitude of up to 50,000 feet. The aircraft are flown by a pilot and a sensor operator from ground control stations. The Reapers are expected to be used in combat operations by the United States military in Afghanistan and Iraq within the next year. (Photo by Ethan Miller/Getty Images)
Photograph by Ethan Miller — Getty Images

The Pentagon is planning to increase daily drone flights by 50% over the next several years — the first significant boost to the nation’s drone program since 2011.

The plan is a reaction to the increasing number of “global hot spots” requiring surveillance, including Russia, Iraq, Syria, the South China Sea, and North Africa, according to a Wall Street Journal report.

The AP reports that the decision came on the heels of the Air Force’s request to reduce its current combat air patrol mission load from 65 to 60 per day. The Air Force had been almost exclusively responsible for drone missions, and the sorties were exhausting pilots and crews. The new plan would reduce the Air Force’s responsibility for drone flights by having the Army conduct about 16 daily flights and U.S. Special Operations Command and civilian contractors perform about 10 each, totaling around 90 flights per day by 2019.

The ramped-up plan also calls for increased capacity for lethal airstrikes, according to the Journal, as well as a new focus on maximizing the use of drones while they are in the air.