Apple in the news: The people have spoken 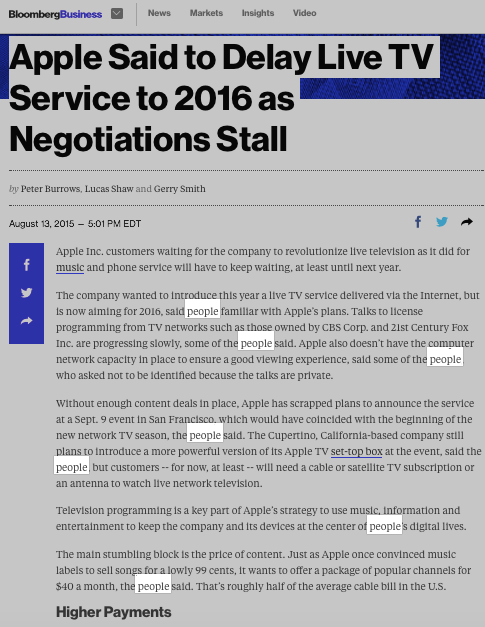 I don’t mean to pick on Peter Burrows and his team at BloombergBusiness. Everybody who writes about Apple does it from time to time. But seven references to the people “familiar with Apple’s plans” in the first five paragraphs of Apple Said to Delay Live TV Service to 2016 as Negotiations Stall may set some kind of anonymous sourcing record.

It’s one thing for the folks at CBS, Fox and NBC (just a guess) to talk out-of-school about their negotiations with Apple. Hollywood has always been a chatty town and a Silicon Valley nondisclosure agreement isn’t going to change that.

But “the people” in Thursday’s story seem to know everything about Apple, from its product release schedule to the capacity of its TV streaming network.

“Apple also doesn’t have the computer network capacity in place to ensure a good viewing experience, said some of the people.”

The people have spoken. Or at least some of them.