5 ways to fight your fear of public speaking 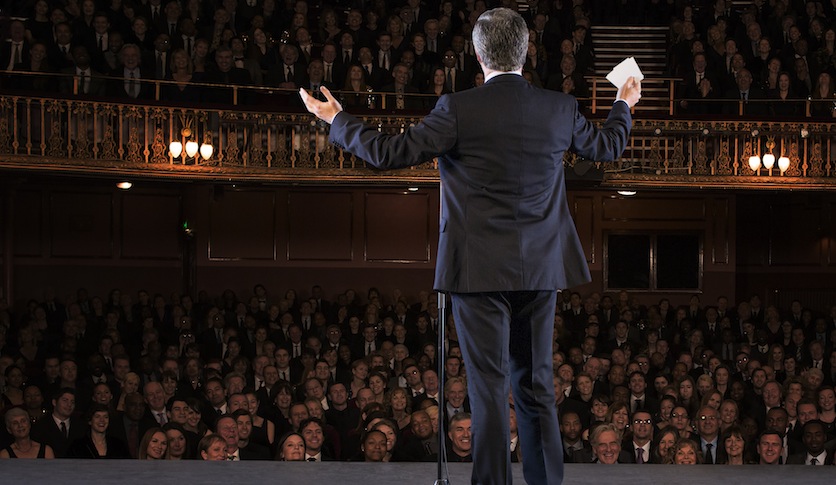 Everyone at some point in their life has been nervous about public speaking. It can be one of the most terrifying things to encounter. Getting up on that stage, suddenly you have flashbacks to that fifth grade book report that you definitely didn’t prepare for. But I have some tips to become a better public speaker.

Before you get up there, find calm by just being you

Just before you get up there, don’t try to do anything special, or start a ritual. I’m serious.

Focus on normal everyday stuff. Check your email. Joke with a friend. Act like the talk isn’t even going to happen. Try this out for yourself; you might find calm in just doing everyday activities. It will help with overcoming anxiety.

It works tremendously for me. I am in the zone, I’m ready, but I’m not going over notes. I’m not mouthing anything to myself. Those last minute tendencies people have to want to fix something or change something are destructive. Push them away. Go with the plan. It will psych you out, and nobody wants to be their own cause of destruction. Leave it all behind. You’re ready.

But the bottom line on preparing really is this: you do you. This is what works for me best. Self-awareness is so enormously important in our world today. Sure, before I speak, I need to just focus and not think about anything else for a while. But if you need notes? If you need to do push ups and some lucky ritual to feel good? Do it. Whatever is going to get you motivated and comfortable with the fact that you are about to take the stage, do it. I am happy to give my advice and tell you what I do, but in the end, you have to hack away at it whatever you have till you figure it out for yourself.

I am a big believer in the fact that listening to gurus won’t actually change your life. I don’t expect everyone to be like me. Not at all. In fact, you should be focusing on what works for you. I think people ask successful entrepreneurs questions like “What does a day look like for you?” because they think they might hold some secret to success. Some overarching wisdom that will change everything.

We don’t. The only advice I can give you is audit yourself and figure out what makes you work the hardest.

View your audience as frenemies

So what happens when you hit the stage? Well, weird stuff starts to happen.

You might feel this strange combination of seeing the audience as friends but also enemies. There is a strange mix between these two emotions that happen when you really get into a talk.

Take me for instance. I love them for being there and supporting me and being interested in what I have to say, but I also really want them to get the message, to leave with a new understanding of things. And that is a powerful feeling, the pull between those two things.

That is what public speaking is really all about. You want to convey something with nothing but your own voice. You don’t want to seem crazy, but emotion is a good thing. It’s strong. It’s convincing. You’re allowed to get excited about your idea.

A while back I had to read a commercial on a radio show before being the guest, and they gave me a piece of paper with everything I had to say. I completely botched it. I kept messing up. Finally, one of the guys on the radio show suggested I lose the paper and just talk.

That did the trick. It just showed me even more that you need to know yourself. I am self aware enough to know I can’t speak under those circumstances. I can’t bring notes onstage. So like I said above, know yourself. Try every different option or idea until you have exhausted them and found the one that works for you.

Yes, you can mess up a little

The good thing is, you can afford to mess up a little. But only a little. Why? Because…

So you did it. You learned to overcome your fear of public speaking. You did that first gig and it went…fine? Amazingly? Not great?

Well I have good and bad news.

The good news is: You’re only as good as your last speaking engagement.

The bad news is: You’re only as good as your last speaking engagement.

Even if you’ve had a long career of public speaking, seven or eight years for me, none of that matters. The second you take that stage, you’re basically wiping the slate clean.