Will this convince you that a Honda Accord is cool? 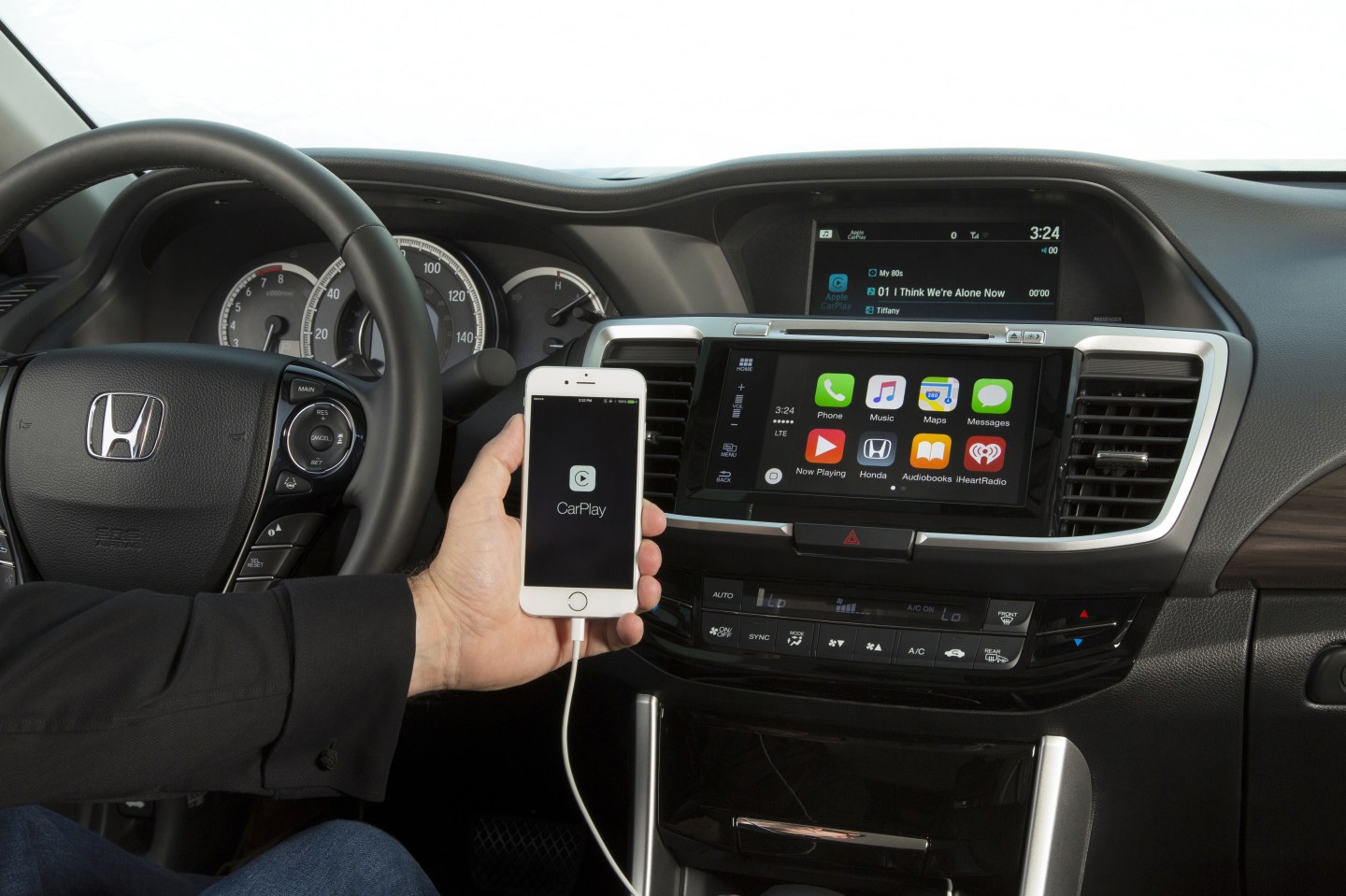 The Honda Accord has long been a preferred sedan for sensible suburbanites. A safe, reliable vehicle, but perhaps not all that “cool.”

Honda is hoping to change that — while also keeping its reputation for safety and reliability. Not only does the 2016 Accord have a jazzed up exterior and some high-tech devices, but most importantly, it will be the first mass-market car to come with Apple CarPlay.

Many other cars, like Chevrolet, Ford and Nissan will offer Apple CarPlay, but Accord is first of the mass-market vehicles (after Ferrari) to come market to it.

The new software from Apple projects certain popular apps from Apple iPhones on the dashboard’s seven-inch display, via cable, allowing a driver to text, call, send email, navigate or fiddle with tunes while keeping hands on the wheel and eyes on the road.

“At a basic level, customers have been asking us why can’t the technology of the car work as well as the technology of their phones,” said Sage Marie, Honda senior manager of public relations. “Connectivity is important to millennials. Our research shows that many of them consider their time in the car as a disruption to connectivity.”

Apple CarPlay can “mirror” iPhone apps on its dash via CarPlay, emulating the look of iPhone’s home screen. Likewise, Accord can project the screen of Android phones using the Android Auto system.

Accord has the distinction of being first to accommodate both smartphone display formats. CarPlay and Android Auto (first offered on the 2015 Hyundai Sonata) are headed to other automakers and soon will be offered by most – but not necessarily all – automotive brands, according to Apple’s website.

Safety regulators and activists have long expressed alarm at distracted driving, especially from smart phones. Automakers, in response, have developed and embedded proprietary infotainment systems in dashboards: Like smartphones, they can manage music, phone calls, navigation; they’re less distracting since they’re operated by voice commands or by toggle switches located on the steering wheel.

But automaker’s proprietary systems have yet to match the smartphone’s ease-of-use – at least that’s the way it looks from the preponderance of motorists who prefer to text, comment on Facebook and search for a Starbuck’s on their own devices while driving. “As an automotive enthusiast I’m relieved that millennials are interested in our cars,” said Marie, who says that Accord is the No. 1 choice of vehicles among U.S. buyers under the age of 35. “If technology can deliver something they’re asking for, it only broadens the appeal.”

“We think of this as a safety system,” said Davis Adams, a Honda specialist in the use of CarPlay, Android Auto and other technology features. He plugged the cable onto the instrument panel to connect his iPhone, and then answered a few quick questions that appeared on the dashboard screen.

Instantly, several familiar iPhone apps appeared on the Accord’s dashboard screen – but his iPhone was disabled and showed a blank screen. The system works on iPhone5 and later versions of the device.

For the time being, only a few popular apps have been adapted so they can operate via CarPlay: Spotify is one of them; Facebook is not; more are in development, says Honda.

Siri, Apple’s virtual assistant, was able to perform a number of functions through the car’s speaker system, just as it does for iPhone. Adams sent a few messages, demonstrated the navigation system and placed a phone call or two. CarPlay worked without a hitch.

For now, CarPlay comes free of charge with any Honda infotainment system that includes a seven-inch screen. The judgment from consumers as to CarPlay’s “coolness” should be apparent shortly after 2016 Accords start arriving at U.S. dealerships in August.