Here are the 10 biggest losers of the Global 500 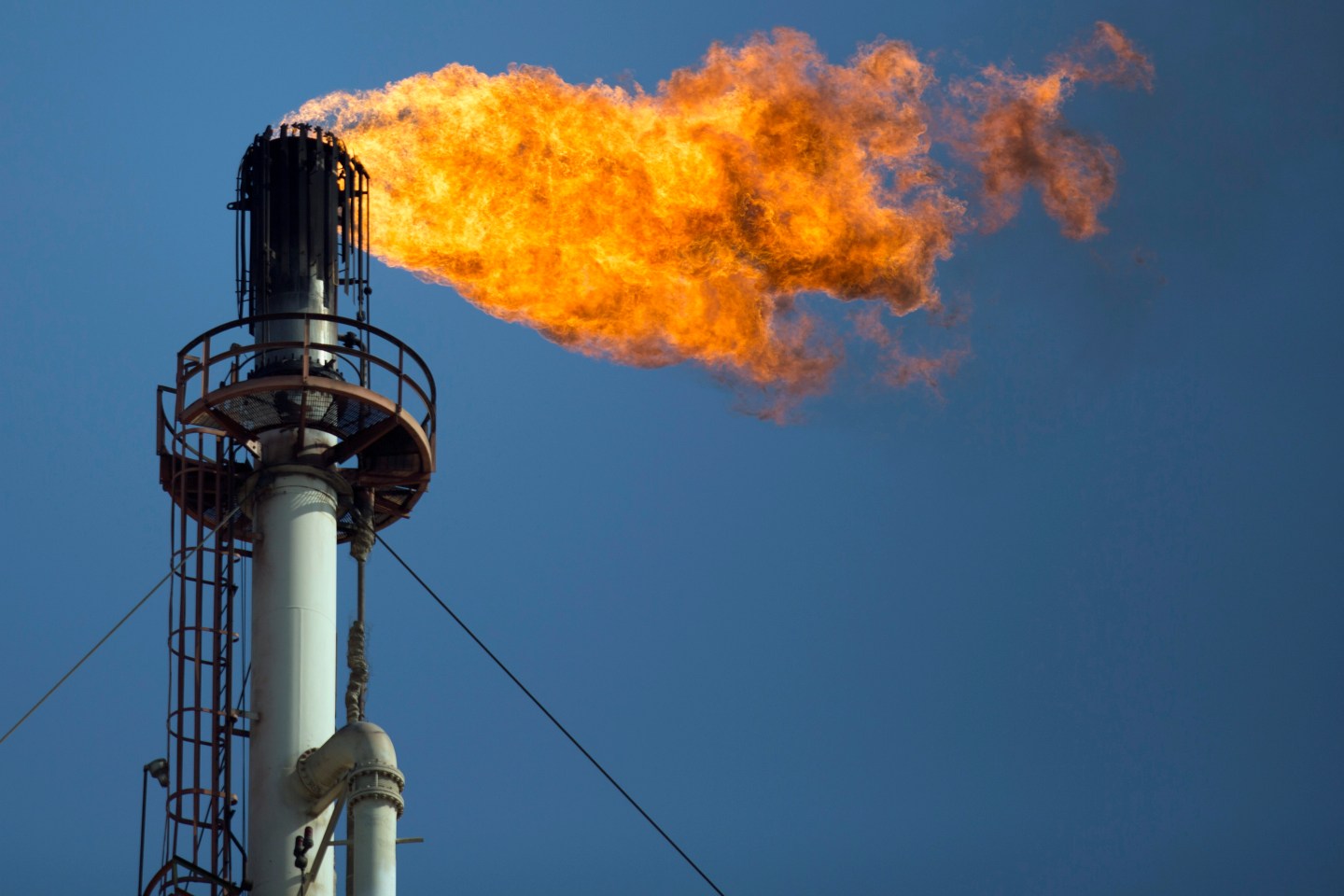 All these factors contributed to some headline-making negativity surrounding a handful of companies in the Global 500. In total, 54 corporations suffered losses that amounted to $91.7 billion. The steep decline in the prices of key commodities, such as oil and iron ore, destroyed the bottom line of energy firms like Germany’s E.ON and Britain’s Anglo American. For the US Postal Service, regulatory payments out of their control resulted in an unfavorable balance sheet. For companies like Petrobras and the Royal Bank of Scotland, scandals and financial impropriety at the highest levels have made the road back towards profitability a tough one to chart.

You can delve deeper into our entire Global 500 list here for a closer look at each company’s data. Here’s a rundown of the 10 biggest losers of the Global Fortune 500, starting with a Mexican oil company that lost $10 billion more than the nearest corporation.

The national oil company of Mexico – responsible for one third of the country’s tax revenues - could not stem a massive leak of earnings, hit by a trifecta of fast-dropping oil prices, record-low production and currency exchange losses. The bad news could get even worse: Mexico’s energy reforms have now opened up its untapped reserves to foreign investors, breaking Pemex's monopoly on the energy market and opening it up to a fight. To cope, the government has ordered a $4 billion budget cut in the hopes Pemex can step up to the level of new competition.

A customer holds her goods in a shopping basket as she browses goods displayed in the toiletries and dental care aisle inside a Tesco supermarket, operated by Tesco Plc, in London, U.K., on Monday, April 20, 2015. Tesco's April 22 results will serve as a reminder of the scale of the task still facing new Chief Executive Officer Dave Lewis after his decision to close dozens of stores, cancel some openings, consolidate head offices and cut prices on hundreds of branded goods. Photographer: Jason Alden/Bloomberg via Getty Images

The iconic British supermarket, once hailed as the most successful retailer in the country, didn’t just endure a loss-making year. Their loss of $9.3 billion was the worst performance in the company’s 96-year history, and the fifth biggest loss in the history of corporate Britain. Around $7 billion of these losses came from a precipitous fall in value of its UK stores, leading the company to shutter 43 of its outlets. The company also had to dig itself out of an accounting scandal after they were found to have overstated first-half profits by around $424 million, leaving CEO Dave Lewis, who took over the company in the middle of last year, with a mammoth turnaround project on his hands.

A Petroleo Brasileiro SA (Petrobras) ship sits docked at a port in Rio de Janeiro, Brazil, on Wednesday, May 20, 2015. Even with the real posting the biggest drop among major currencies this year, Brazil's current account gap has hovered near a record as a percentage of gross domestic product. Photographer: Dado Galdieri/Bloomberg via Getty Images

On the back of one of the largest bribery schemes Brazil has ever seen, state-run oil company Petrobras wrote down around $2.1 billion and attributed these losses to the “Lava Jato Operation” corruption scandal between 2004 and 2012, when kickbacks from major contracts were paid out to politicians and ex-executives. The company is also the world’s most indebted oil company, with around $120 billion on their books, leading Petrobras to arrest their troubled finances by shrinking its long-term spending to its lowest level in eight years.

NEW YORK, NY - JUNE 05: A Postal Service worker is viewed in lower Manhattan on June 5, 2015 in New York City. New numbers which were released by the government today showed that the U.S. economy gained 280,000 jobs in May and over a million new jobs so far in 2015. May's jobs report dispelled fears that the U.S. economy was contracting after the winter slowdown. (Photo by Spencer Platt/Getty Images)

Perhaps no entity in this list has the fiscal responsibility of the official postal service of the US: their loss is almost entirely a result of a $5.7 billion-prefunding requirement of the Postal Service Retiree Health Benefit Fund, a legally mandated necessity for the independent agency. An additional $1.2 billion was earmarked for non-cash workers’ compensation expense, and the total impact of these payments has led Executive Vice President Joseph Corbett to call for legislative change. Not all their losses can be laid at the door of government - total mail volume declined by 2.8 billion pieces from the previous year.

The taxpayer-owned British bank entered a seventh straight year of losses, and the goodwill write-down of around $6.2 billion for the spin-off of its US unit Citizens Financial Group factored in heavily to the company’s financial performance. But RBS also had to deal with fines from US and UK regulatory authorities, costing the bank around $3.4 billion in litigation and conduct provisions after they and five other banks were found to have rigged foreign exchange markets. The way back? The bank will cut thousands of jobs in a restructuring effort, reduce its geographical footprint by around two-thirds, and slash around $109 billion worth of assets.

Pressure control valves are pictured inside the gas-fired power plant of German utility giant E.ON in Irsching near the southern Bavarian town of Ingolstadt.

The pressure from a changing European energy market that is embracing renewables has forced Germany’s biggest utility into an existential crisis, with some heavy repercussions. The company blamed the decline in wholesale electricity and oil prices for their loss, but also had to deal with consumer-subsidized wind and solar power in Germany, where the government has set a goal of generating 80% of electricity from clean sources by 2050. In preparation, E.ON will soon be split into two companies: the parent company name will be used for their renewable energy operations, while their conventional energy business will adopt a new brand name and be run separately.

A worker adjusts his security cable while doing a maintenance check on a wind turbine at the Comision Federal de Electricidad (CFE) wind farm in La Ventosa, in the state of Oaxaca, Mexico, on Tuesday, May 28, 2013. State-owned CFE is trying to capitalize on investor demand that?s made Mexico the world?s best-performing government bond market to borrow pesos at record-low interest rates. Photographer: Susana Gonzalez/Bloomberg via Getty Images

As part of their large-scale reforms, Mexico is opening up their electricity sector in an effort to bring down costs for consumers (the country has the eighth-most-expensive electricity prices in the 34-nation OECD). This could mean trouble for the state-owned Federal Electricity Commission, Latin America’s biggest utility, who have been losing money due to high natural gas costs. In response, CFE will pour in $2.25 billion into five new pipeline projects, an expansion that should boost capacity and lead to cheaper gas imports from the US.

Japan’s largest oil refiner have been the victim of falling crude oil prices, resulting in a loss of around $3.3 billion in the value of their inventory. But management executives have also pointed the blame for their performance on green-conscious Japanese drivers. Domestic demand for petroleum products have dropped due to a growth of fuel-efficient vehicles; almost 60% of new cars in Japan are either hybrids or mini-cars. The shifting energy usage landscape has led the government to call for a consolidation of oil refiners, and competitors such as Idemitsu Kosan and Showa Shell Sekiyu KK are said to be considering such a move.

Anglo and others have delivered vast reserves of high-grade misery to shareholders this year.

The fall in prices of key commodities such as iron ore, coal and copper cratered the earnings of the British mining company, accounting for a $2.4 billion hit on its net income. The drop in iron ore price dragged down the investment of the company’s new Minas-Rao operations in Brazil, leading to a $3.5 billion write-down of a mining asset already plagued by delays and high costs. CEO Mark Cutifani has painted a bleak picture for the next two years, and will have to lean on the company’s De Beers diamond unit, which grew 11% to $7.1 billion last year.

The Japanese electronics maker is doing all it can to survive in an environment that has been unkind to its profit margins. Price competition from Chinese counterparts has hit their LCD TV unit hard, which accounts for one-third of their total sales. After a massive third net loss in four years, the company will look to cut 3,500 jobs, exit their loss-inducing solar panel business and approach major lenders for a debt-for-equity swap that would write off $1.6 billion in loans.