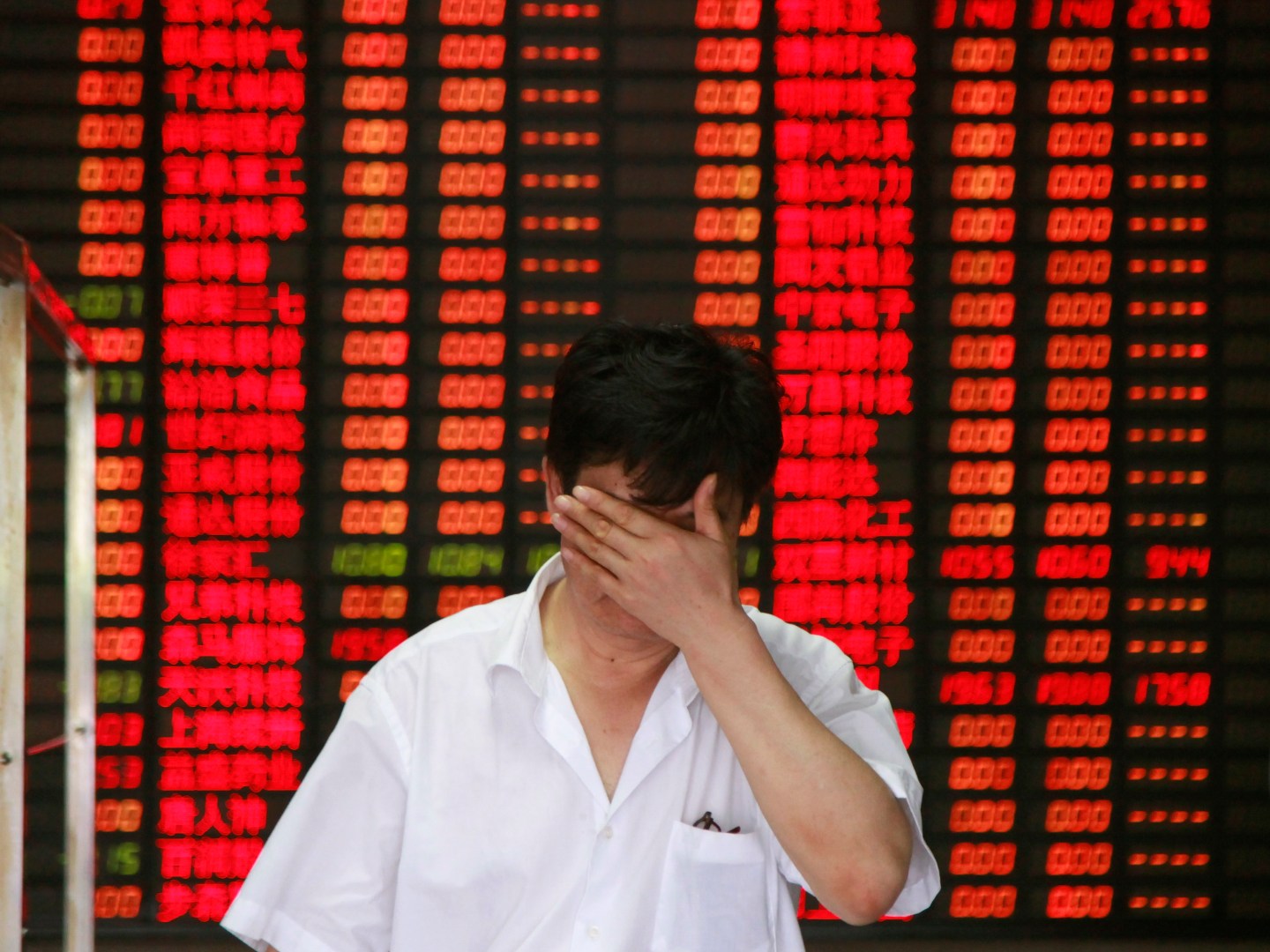 SHANGHAI, CHINA - JULY 08: An investor covers his face while he walks out from a brokerage firm on July 8, 2015 in Shanghai, China. On Wednesday Chinese shares fell again, with Shanghai Composite Index tumbling 5.5 percent to 3,521.20. The Shanghai stock index fall more than 30 percent in less than a month. (Photo by On Man Kevin Lee/Getty Images)
Photograph by On Man Kevin Lee — Getty Images

To explain the government’s unprecedented spending and intervention to boost Chinese stock prices, efforts which came up short yesterday when stocks fell by 8.5% and again today by 1.7%, China’s Securities Regulatory Commission said it was acting to prevent, in part, “systemic risk.”

The economic buzzword appeared in the lexicon in 2008, following the collapse of U.S. subprime loans and real estate prices, which imperiled brokerages like Lehman Brothers and had a domino effect on other banks that eventually led to the world financial crisis. Former Federal Reserve chief Ben Bernanke has said the isolated problem of failing subprime real estate loans metastasized because Wall Street banks were overleveraged, rendering the entire financial system vulnerable. “Systemic risks are developments that threaten the stability of the financial system as a whole,” he wrote after the worst of the crisis.

Is that what China’s stock bubble’s burst is? A systemic risk that threatens the whole of China’s financial system?

The answer is probably not, for the reasons below. However, the government’s pledge of tens of billions of dollars in response to something as simple as the 30% decline in stock prices over the past six weeks, following a year-long run-up of more than 120%, might indicate the Chinese financial system is more fragile than previously thought.

China’s stock markets are fundamentally different from those in the developed world.

First, China’s 90 million stock traders represent a small portion of the population. Even if you conservatively consider the data, which include multiple investment accounts for an individual, the total figure represents just 7% of China’s 1.3 billion people.

“Household balance sheets are dominated by property, bank deposits and wealth management products (most of which are effectively fixed-income instruments),” wrote Arthur Kroeber of Gavekal Dragonomics today, who concludes that stocks’ recent losses will only “pinch household wealth, but not undermine it.” The big fear of a negative wealth effect doesn’t seem to be the case in China’s stock markets, which are populated by the relatively well-off and traders who know the volatile markets are risky.

Second, stock financing is a relatively small portion of Chinese companies’ balance sheets. And companies don’t panic when markets cyclically depress their shares, which has happened regularly since China’s stock market first opened in Shanghai in late 1990. China’s economy grew annually in the double-digits through the 2000s as stocks endured two bear markets.

“The huge amount of money raised through IPO and secondary placement is relatively limited in comparisons to bank loans and bonds,” says Fraser Howie, co-author of Red Capitalism: The Fragile Financial Foundation of China’s Extraordinary Rise.

He says the bigger issue is that China’s government led by president Xi Jinping has damaged its credibility by encouraging the run-up in stocks and then spending tens of billions to prop up shares amid the inevitable decline, which he says shows that the government has lost control. “One of things people took comfort in was that the government would handle problems,” he says.

However, the one reason the government calling the recent stock market decline a “systemic risk” is worrying is because it may know something the markets don’t. “I don’t see the case to be made for systemic risk,” Howie says. “Unless—is their pitch, that this is so worrying, there has been so much stock used as collateral against loans? Is the government getting ahead of this issue? The government is spending tens of billions of dollars with no clear exit.”

Another close China follower, Anne Stevenson-Yang, co-founder of J capital Research, says there may be $6 trillion leveraged to the stock market. The government’s response may be to quell the worries of financial crisis sparked by liquidity demands. “You think they’d intervene just to maintain the price?” she said.

If the bursting of a one-year old stock bubble went on to cause a wholesale failure of China’s financial system, it would mean China is far more fragile than the conventional view believes.

Certainly, corporate China has indulged in a debt binge that would stand comparison with any in the West in recent history. Total social financing, the broadest measure of government and private debt tracked by Beijing, has tripled since 2008, and risen from 125% of GDP at the end of 2008 to some 207%/GDP at the end of the first half of this year, according to the People’s Bank of China.

The massive hedge fund Bridgewater Associates attracted attention for an investor letter last week (to read the full letter, click here) that described it becoming worried about the effects of the stock market collapse on China’s economy. But the hedge fund was hardly predicting a crash, as became apparent later in the week, when Bridgewater gave a statement to the Wall Street Journal that “too much has been made of the shift in their thinking.” The WSJ said the hedge fund “reiterated support for Beijing’s ‘capable’ leaders.”