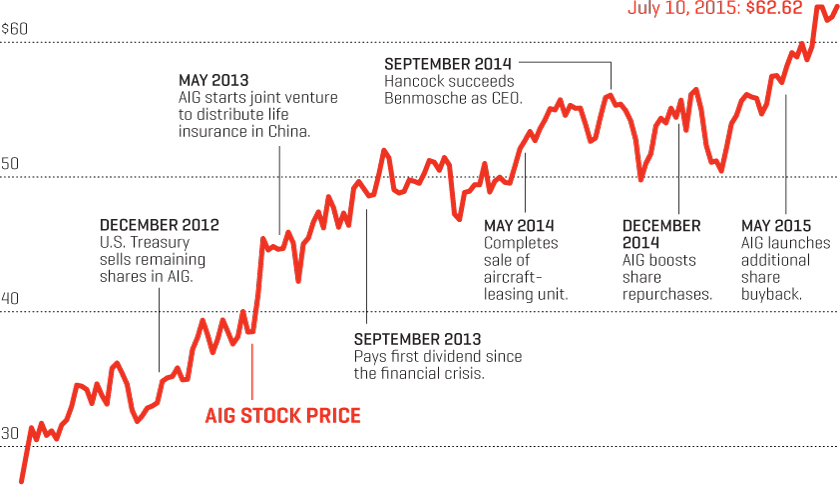 John Roth has managed the Fidelity New Millennium Fund since 2006, beating the S&P 500 handily over that stretch. His stock-picking approach relies in part on behavioral
economics—he looks for situations where investors’ irrational decision-making creates buying opportunities. That’s one reason he likes insurance giant American International Group (AIG) (AIG), a company he thinks some investors are still punishing because of its risky behavior during the financial crisis. New Millennium has owned a significant stake in AIG since 2012; in an interview, Roth told Fortune why he recently bought more shares.

AIG has unwound almost all of the credit default swaps and other toxic investments that turned it into a federal bailout recipient in 2008. And Roth notes that AIG retained more than 90% of its core insurance customers through the worst of the crisis. It remains a financial giant, ranking No. 152 on this year’s Global 500.

Roth believes that AIG should trade at a premium to insurance rivals like Zurich Insurance and Ace Group (ACE). But its price-to-book ratio, at 0.78, is still only slightly above half that of its peers.

The late Bob Benmosche, AIG’s CEO from 2009 until September 2014, realigned the com­pany’s focus so that actuaries and salespeople are rewarded for risk-adjusted returns rather than simple growth, says Roth. “The new system is much healthier,” he adds.

Under Benmosche and new CEO Peter Hancock, AIG has upgraded its technology infrastructure, Roth says, helping the company more accurately price its policies and cross-sell products. Last fall, shortly after assuming AIG’s helm, Hancock appointed the com­pany’s first chief information officer. Roth says the tech overhaul has weighed a bit on AIG’s sales in recent years—its 2014 revenue, at $64.4 billion, was down about 6% from the previous year—but he thinks it will pay off in the long run.

International regulators have deemed AIG a “systemically important financial institution”—that is, big enough that its failure could trigger another crisis. That designation will require it to keep an as-yet-undetermined amount of cash on its books. But Roth says AIG is working from a strong capital position; its debt-to-total-capital ratio has fallen 20% since 2012. And building reserves hasn’t kept AIG from paying shareholders: It reinstated its dividend two years ago and has bought back shares in three of the past four quarters.

A version of this article appears in the August 1, 2015 issue of Fortune magazine with the headline “A Second Look at AIG.”