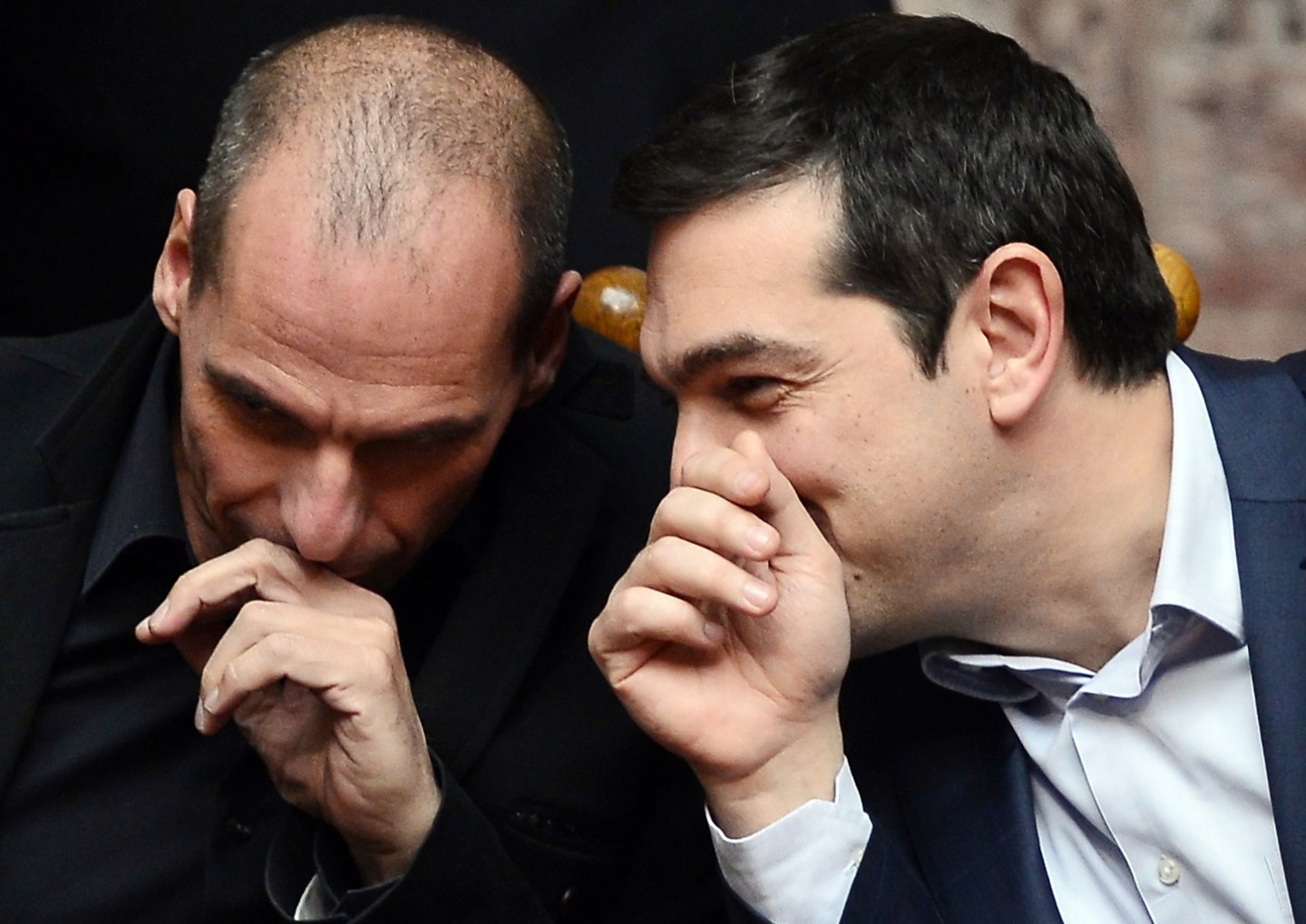 Greece's Prime Minister Alexis Tsipras (R) talks with his Finance Minister Yianis Varoufakis at the greek parliament in Athens on February 18,2015. Greece said it was "optimistic" it would resolve the bailout crisis by meeting the demands of both the electorate and creditors with its proposal for a loan extension, despite EU scepticism. AFP PHOTO/ LOUISA GOULIAMAKI (Photo credit should read LOUISA GOULIAMAKI/AFP/Getty Images)
Photograph by Louisa Gouliamaki — AFP/Getty Images

It’s a measure of how far into the realm of the absurd the Greek crisis has gone that Yanis Varoufakis’ surreptitious plan for taking Greece out of the Eurozone should have made so many headlines over the weekend.

It seems only hours ago that the many critics of the former finance minister and his boss Prime Minister Alexis Tsipras, were complaining precisely that they hadn’t prepared for a “Grexit” scenario. But now a new political row has erupted because they had.

But the real scandal is not that the government laid secret plans to leave the Eurozone, it’s that it realized they were unworkable, but continued to play chicken with its creditors as if they were convinced of their infallibility for another two months, while the country’s economy spiralled into another disaster.

Leaving aside the intricacies of domestic Greek politics, the plan, as related by Varoufakis on an off-the-record (sic) basis to over 80 hedge fund managers and other investors on a conference call last week, went like this:

The self-styled ‘erratic Marxist’ put together a five-man team with the task of preparing a contingency plan in case Greece were forced out of the currency union–something that came perilously close to happening at a fraught weekend of meetings earlier this month.

It was, of course, an incredibly sensitive task: if word had leaked out that Greece was making any preparations for re-introducing the drachma, the already-calamitous run on Greece’s banking system would have gotten much worse much faster. It would have fatally weakened the negotiating position vis-a-vis the creditors of a government that was desperately trying to defend its membership of the Eurozone. And it would have encouraged those such as Wolfgang Schäuble, the German finance minister, to push harder for “Grexit”, using it as proof that Athens, too, accepted it was the better option.

On top of the political considerations, there were the mechanical ones. According to Varoufakis, the plan was to create a duplicate of the payment system on the website of Greece’s tax inspectorate, the equivalent of the IRS.

“We were planning to create, surreptitiously, reserve accounts attached to every tax file number without telling everyone, just to have this system function under wraps, and at the touch of a button to allow us to give PIN numbers to tax file number holders (taxpayers).

“That would have created a parallel banking system while the banks were shut as a result of the ECB’s aggressive action (to shut the) banking system to give us some breathing space.

“This was very well developed and I think it would have made a very big difference, because very soon we could have extended using it apps on smartphones and it would become a functional parallel system. Of course this could be euro-denominated, but at the drop of a hat, it could have been converted to a new drachma.”

The only problem? The tax inspectorate’s computer system was controlled by the” Troika” of institutions enforcing the conditions of the bailout, who also had to be kept in the dark to defend Tsipras against accusations of negotiating in bad faith.

The solution, Varoufakis said, was to have one of the team–“a childhood friend” who had gone on to be a professor of IT at Columbia University”–hack into the Ministry’s system in order to create the duplicate.

It’s easy to see why Greece’s parliament might be upset at the thought of the Finance Minister and a few of his friends hacking into the country’s tax records–access to which is supposed to be governed by all manner of constitutional safeguards–especially if that aroused suspicions that Tsipras was misleading parliament and the country by saying that he remained committed to keeping Greece in the Eurozone.

The incident has been made to look even worse by opposition media drawing a dotted line between it and a separate plot by Tsipras’ far-left colleagues to raid the central bank and inject its reserves into the economy in the case of a Grexit. Texas University Professor James K. Galbraith, one of Varoufakis’ five-man ‘Working Group’ said in a statement Monday that “apart from one late, inconclusive telephone conversation between MP Costas Lapavitsas and myself, we had no coordination with the Left Platform and our Working Group’s ideas had little in common with theirs.”

In fairness, Varoufakis has done his best to allow Tsipras a vestige of plausible deniability: he said in the conference call that Tsipras had asked him to look at the operational issues of abandoning the euro before he became Prime Minister in January and had never authorized him to scale up the operation afterwards. And it has to be said that, if Schäuble had had his way earlier this month, the legality of the government’s contingency planning wouldn’t be top of anyone’s list of concerns today.

But Varoufakis’ belated candor still does little to inspire confidence in Tsipras’ leadership (or his own competence). Their Syriza party came to power on a platform that was openly incompatible with continued assistance from the rest of the Eurozone. As the scale of its misjudgment became clear, Tsipras had the alternative of

a) backing down and accepting the bailout conditions,

b) drawing up detailed plans for “Grexit” that would surely have leaked, or

c) drafting an inadequate, legally shaky and under-resourced one that would stay confidential.

He chose c). When push came to shove, the lack of a viable alternative plan for drachma reintroduction then forced him into a humiliating surrender on terms far tougher than those he had spurned earlier. If Greece has any hope left, it must surely be that what’s left of the Syriza government is capable of learning fast from its mistakes.