As Greece’s banks reopen, the plot in Germany thickens 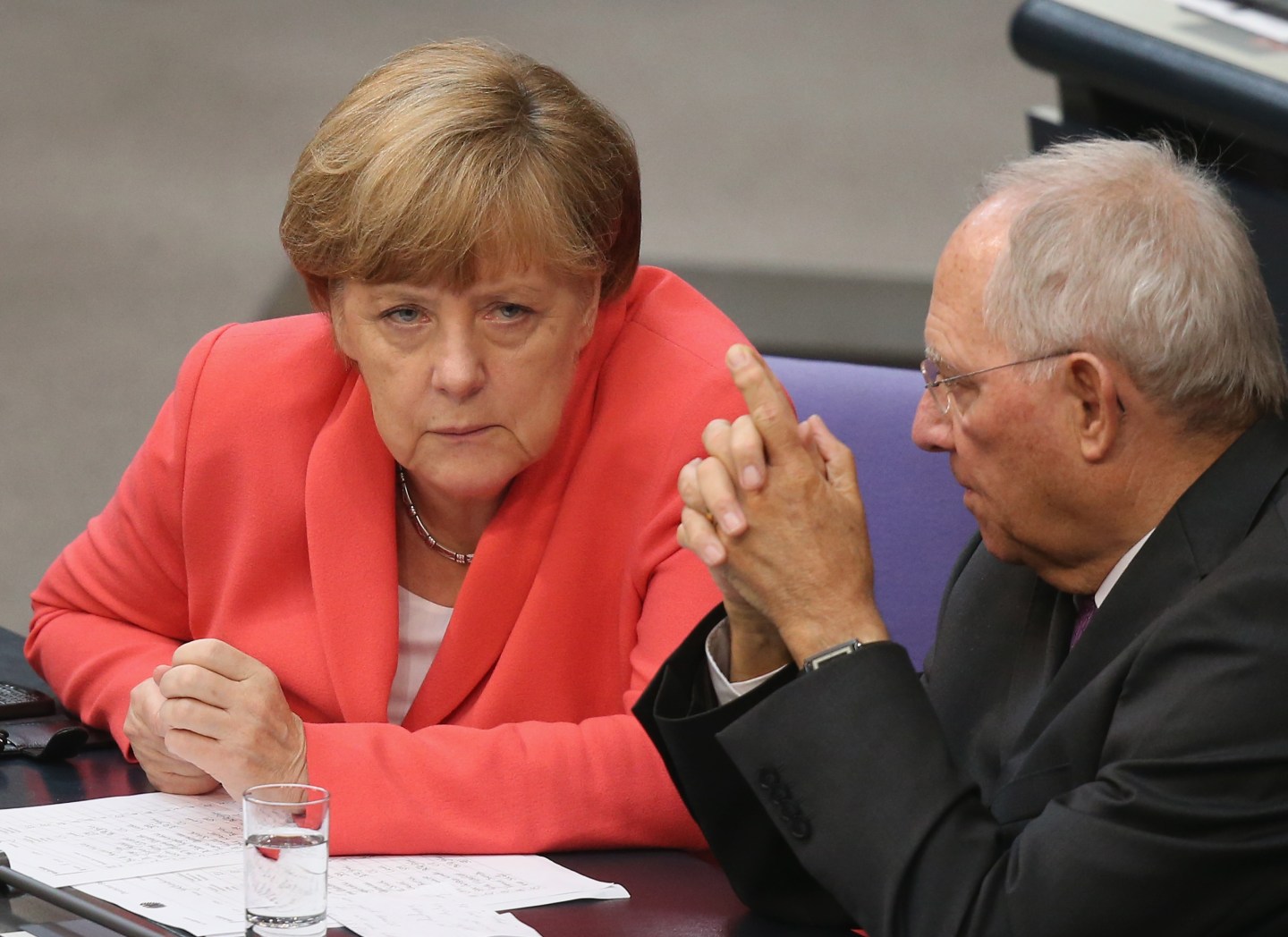 Greece may have taken the first steps towards economic redemption Monday, but anyone thinking that its future in the Eurozone is assured needs only to look as far as Berlin for a reality check.

Comments at the weekend by Chancellor Angela Merkel and her finance minister, Wolfgang Schäuble only confirmed the rift that opened up in the last two weeks over whether or not to force Greece out of the Eurozone.

On the one hand, Merkel told the scrupulously respectful state-run ARD TV channel that she considered the topic of “Grexit” closed after last weekend’s all-night summit that patched together another temporary fix for the highly-indebted country. She admitted that the issue had been on the table, but said: “We decided for another option. There is only the possibility of taking a common path with Greece.”

On the other, Schäuble, who had insisted on the Grexit scenario being on the agenda that the Eurozone’s finance ministers prepared for the summit, has continued to argue for it ever since, and stirred things up further at the weekend in an interview with Der Spiegel by hinting he would resign if Merkel tried to force him to shut up.

“Politicians’ responsibilities come from the offices they hold,” Schäuble said. “Nobody can coerce them. If anyone were to try, I could go to the president and ask to be relieved of my duties.”

Both party loyalty, and a very real awareness of how much is at stake, will obviously lead both to gloss over their differences for the present: Merkel said no-one has asked to be dismissed, and echoed Schäuble’s line that a write-down of principal claims–the much-touted ‘haircut’–wouldn’t be legal in the Eurozone as it stands. Schäuble for his part said he wasn’t thinking of resigning, and that “we (Merkel and I) know we can rely on each other.”

But the 74 year-old, who has been a member of the German Parliament since before Greek Prime Minister Alexis Tsipras was born, says nothing by mistake in set-piece interviews, and the sub-text is clear: back me or sack me.

Schäuble is making his threats from a position of strength: the opinion polls currently give him higher ratings than Merkel, due overwhelmingly to his uninhibited comments about Greece. This is a remarkable performance, given how much of German society has alienated over the years. Merkel has always enjoyed more popularity among non-Christian Democrat voters than the spiky political bruiser who is her finance chief.

It’s tempting to see the Schäuble-Merkel rift as an overblown riff on a mundane ‘Good Cop, Bad Cop’ routine to scare Greece into keeping to the reform course.

But it can’t mask the fact that there is a very real difference of opinion both in their Christian Democratic Union, and in the country at large, as to how far Germany should go in trying to force a solution to the Greece problem that amounts to more than just ‘kicking the can down the road.’ Roughly half of Germany (the Schäuble half) says it’s willing to risk breaking up the currency union (in the hope of making it a better one in the long term), while the Merkel half shies away from letting Germany be cast as the villain that broke up the project of European integration.

The differences can be nuanced as long as no hard decisions have to be met. But when (as they did last week) the decisions and the outcomes get binary, they have to be confronted. And on matters as important as Grexit, a split between a head of government and her finance minister is as unsustainable as…well, as Greece’s debt load.

As of today, Greece has received its €7.16 billion bridging loan, paid off the ECB, cleared €2 billion in arrears to the IMF, and opened its banks again. The government is drawing up its next bills to slash, burn and reform at the insistence of the creditors. The process of ‘extend-and-pretend’ is back in full swing. All that being the case, the Merkel-Schäuble row may die down in the short-term.

But it can’t go away, because the issue will have to be faced again in October, by which time Athens will have had to prove its determination to enact measures it doesn’t believe in. On past form, it’s near certain that Greece will fail to live up to its commitments. But the key to the story’s ending will be how Berlin reacts to that failure, and the Merkel-Schäuble split will be the barometer of that.