These are the best Global 500 stocks to buy 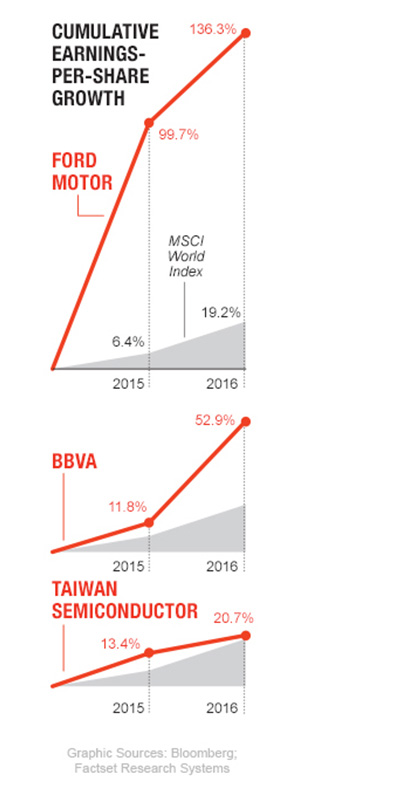 When you invest globally, the world’s headaches become yours—but so do the world’s opportunities.

Both sides of that rhetorical equation have been on display this summer. Over a few rough weeks, a transnational investor could have been simultaneously stung by a European equity correction (thanks to Greece’s implosion) and by Shanghai’s sinking stock market—both of which also dragged down American stocks. But that same investor (after a deep, calming breath) could also have recognized the potential long-term benefits of global exposure. Foreign companies (represented by the MSCI World ex-USA index) are somewhat cheaper than American equities, as measured by price/earnings ratios, and they’re also expected to increase their earnings faster through 2016.

With international diversity in mind, we’ve subjected Fortune’s Global 500 to a rigorous screen, looking for multinational companies whose stocks are positioned to leap ahead even if others struggle. We started with U.S.-listed companies that have outperformed the MSCI World index over the past three years, returning more than 56% over that span—a sign of sustainable strength. But we also screened for valuations below that index’s average (P/E: 17.5). We wanted promising growth prospects, so we then narrowed down the list to companies expected to deliver above-average earnings growth in 2015 (at least 6.25%), and above-average sales growth this year (any positive increase, as top lines are expected to shrink globally in 2015) and next (at least 5.45%). Finally, we required a dividend yield greater than the MSCI World average of 2.4%.

Our number crunching and talks with top investors left us with three intriguingly affordable companies from three continents. Here’s why they’re worth betting on.

Riding Apple’s coattails is nice work if you can get it. Taiwan Semiconductor (known as TSMC) (TSM), the world’s biggest chip foundry, produces components that power devices from Apple (AAPL) and Qualcomm (QCOM), among others. The success of the iPhone 6 has juiced TSMC’s earnings, which are predicted to grow 13% this year—double the world average.

Lag time between blockbuster product launches can cause lulls in earnings; to help investors weather them, TSMC pays a 3% dividend yield. It also trades at a relatively cheap 12 times 2015 earnings. Some investors worry that more smartphone makers could emulate Samsung and manufacture chips in-house, or switch to Samsung chips. But if that happens, TSMC’s size should insulate it. “In this type of business, you probably want to go with the leader, the one who’s going to be around,” says Arjun Jayaraman, a portfolio manager of the $1.8 billion Causeway Emerging Markets Fund, which holds TSMC stock.

Christopher Brown is bullish on trucks, so he’s bullish on Ford (F). The manager of the $2 billion Pax World Balanced Fund says the maker of the bestselling F-150 will benefit as more Americans buy trucks and SUVs, which account for two-thirds of the vehicles Ford sells. In the first half of 2015, U.S. drivers bought 10% more of such light trucks than they did the prior year, as cheap oil eased worries about mileage. Sales could accelerate further once Ford’s more fuel-efficient F-150 hits full production this year, especially if construction rebounds: When business improves for contractors, Brown says, “the first thing someone does is buy a new truck.”

Ford earns around 40% of its revenues abroad, and a weakening euro and slowing sales in China have hurt it. But with its shares trading at 9.2 times 2015 earnings, some investors believe it’s undervalued. Edwin Miska, portfolio manager of the $1.9 billion First Investors Growth & Income Fund, sees Ford trading at $18 to $20 per share a year from now. Factoring in Ford’s 4% dividend yield, that would be at least a 25% return—“pretty nice,” Miska says.

After the punishment Greek banks dealt to shareholders, recommending a bank in a bailed-out European country may sound like a bad joke. But Bryan Lloyd, a portfolio manager of the $5 billion Harding Loevner International Equity Fund, says that logic no longer applies to Banco Bilbao Vizcaya Argentaria (BBVA) (BBVA). In recent years, the Spanish bank has managed its risk much better than its peers, he says, and only 30% of its business is in Spain. “Two-thirds of their revenue comes from outside the European continent,” Lloyd notes, in fast-expanding markets like Mexico and Turkey.

A man uses an ATM machine at a BBVA bank branch in Madrid.Photograph by Susana Vera — Reuters

A version of this article appears in the August 1, 2015 issue of Fortune magazine with the headline “The View From the Top Looks Promising.”